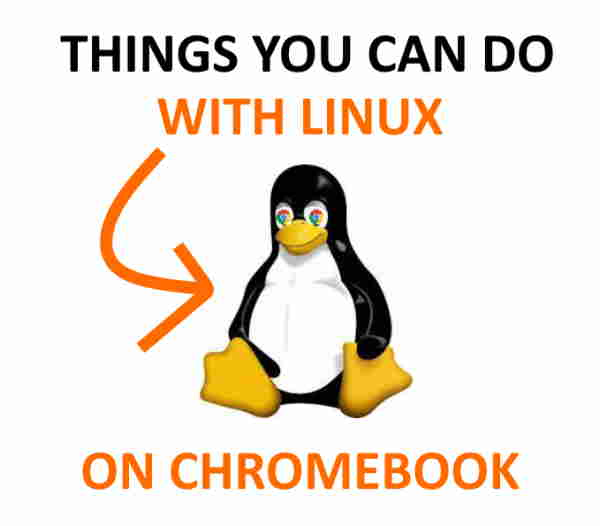 Considering installing Linux on your Chromebook?

For those that are looking for a bit more performance out of their Chromebook, Linux is THE go-to solution.

Think of it as “unlocking” your Chromebook’s full performance.

While Chrome OS is nice, it’s severely hampered for safety, security, and speed.

This keeps your device in a “lockdown” mode which restricts a lot of what your Chromebook can do.

If you’re installing Linux for the first time, you may be pleasantly surprised at all the things you can do without the rules and red tape of Chrome OS!

Let’s talk about WHY you would want to get Linux and see if I can persuade you to try it out!

Why would I want Linux?

Chrome OS is secure. But because it’s so secure, it blocks you from doing some things that you want to do.

Don’t get me wrong- it’s nice to have the safety harness by default.

After all, these laptops are heavily used in the work or classroom setting.

By installing a bunch of safety features, it prevents students, employees, or other users from bricking it.

This allows for easy recovery and makes Chromebooks virtually indestructible to malware.

Chrome OS is safe, but at a cost

Read this page from Google.

This makes them safe from viruses, trojans, malware, exploiters, vulnerabilities, hacks, and other bad things on the interwebs.

If anyone ever tries to sell you some virus software for your Chromebook, it’s likely a hoax and highly unnecessary.

It also helps keep your Chromebook running smoothly. It’s a cloud-based device, letting Google’s servers do a lot of the heavy lifting in terms of storage by being easily integrated with Google Drive.

Recently, they’ve also introduced gaming through the cloud with Stadia. Chromebooks also get in on the action as well.

With all this security comes the cost of performance. Not the performance in terms of raw processing power, but in terms of what your Chromebook can do.

So this leads people who are curious to unlocking the potential of it- by circumventing the security of Chrome OS and getting Linux on their device!

Unlock the power of Linux!

Linux is still very secure and offers a lot of the regular protection that Chrome OS does.

Did you know Chrome OS was built from Linux?

It’s also easy to use and offers plenty of GUI features that Chrome OS users will instantly know how to use. Drag and drop, buttons, menus, limited code (unless you like it), it’s all there.

Plus, Linux is free! You may already have a Chromebook that can enable Linux with the click of a toggle switch.

Here’s what you can do with Linux

And here’s the part you’ve been looking for.

Let’s go over some of the cool things you can do once you have Linux installed.

Games games games. The one pain point of Chromebooks.

It makes sense since these machines are often introduced to the younger crowd, who happen to be a higher demographic of gamers.

Only if Chromebooks could play Path of Exile. Or World of Warcraft. Or maybe even League of Legends?

But they CAN! With Linux! If the game is compatible with Linux, you’ll find it listed on sites like Lutris or playonlinux.

If you see it there and it has decent compatibility, then the only thing preventing you from joining the queue is your Chromebook’s specs. Most don’t have a dedicated GPU, nor much RAM or a good CPU. So this can be a limiting variable.

But for those that have a beefier machine or want to play some lightweight games (browser games anyone?), your device may be able to run it.

Plus, if it’s on Steam, you can always stream it to your Chromebook.

If you don’t like Chrome, you can get Firefox, Opera, Vivaldi, Brave, or SeaMonkey.

Linux lets you do this so you’re not locked to only Chrome.

If you want to turn your Chromebook into an entertainment center, you got it. Linux has the power to do so by letting you download some of the popular, free media players on the planet.

Think VLC, SMplayer, MplayerX, etc. You can watch movies, stream video, and open file types that aren’t supported by Chrome OS like. You can also turn it into a media center like Plex or Kodi.

Chrome OS can’t run executables (.exe) files. But with Linux, you can.

If you’ve ever downloaded pretty much anything from the web and tried to open it on your Chromebook, it won’t let you because it doesn’t recognize the file type.

With Linux, you can launch .exe files so you can download software and install it, which you may be accustomed to on Windows. Microsoft Word, Spotify, Zoom, Skype, etc. It’s all there.

Chromebooks come with a basic set of connectivity I/O ports that support modern peripherals like SD, microSD, USB 2.0/3.0/3.1, HDMI, Bluetooth, and even LTE or SIM cards.

Your Chromebook will automatically detect and allow data transfer between the majority of modern gadgets. You can connect older legacy USB devices, swap out RAM or hard drives, or even connect a DVD or CD drive to it.

But if you want more, Linux may be able to connect to all the things. You may have to search for the driver on older devices, but installing legacy drivers is possible. You can’t say the same for Chrome OS, friend.

With Linux, you’re free to use whatever emulators you want to pretty much run any software on the planet. There are emulators for iOS, Android, Windows, MacOS, etc.

Want to plan those mobile games on your laptop? With an emulator, you can! Some of the most popular ones are Bluestacks and DOSBox.

A lot of people have a Chromebook and a Windows PC. Wouldn’t it be cool to NOT have to switch back to your PC just to use some Windows programs?

With Linux, you can run a virtual instance of Windows and use whatever programs you want that are normally native to it.

Yes, that means you’re literally running Windows on your Chromebook. Ain’t that cool? Just use WINE.

Linux is very secure by nature, and it offers a ton of different add-ons you can get to further enhance your privacy. Everything from VPNs, proxies, tracker blockers, adblockers, etc.

You can make it just as safe compared to Chrome OS:

If you work with documents, then you’ll be pleased to know that Linux offers PLENTY of word processors- for free.

These FOSS (free open-source software) programs will let you type away without paying a penny. You can install anything from the most feature-rich word processors to the most basic ones.

There’s something for everyone- writers, coders, students, note-taking, and everyone in between. Some of the most popular ones are LibreOffice, WPS Writer, OpenOffice, and Google Docs.

If you video edit, you’ll be pleased to know that there are plenty of both paid and free-to-use video editors that are compatible with Linux.

Some of the popular ones are Shotcut, Blender, DaVinci Resolve, Avidemux, Lightworks, and Flowblade. Rather than relying on some web-based app from the Play Store on Chrome OS, you can grab the full desktop version of the editor on Linux.

Whether you edit videos for fun (YouTube, etc.) or you do this as a full-time gig, you’re likely to find something to suit your needs AND let you run it on your Chromebook with the power of Linux.

The primary question is if your Chromebook can run it. They don’t really have any processing power or a dedicated video card for rendering.

For artists, you can get a bunch of different drawing canvases that are compatible with modern-day devices. If you use Photoshop, there’s a Linux alternative available.

This way, you can design, draw, sketch, take notes, or doodle on your Chromebook. If you have a touchscreen, it should allow for touchscreen support directly onto Linux.

This way, you can utilize those convertible Chromebooks (2 in 1) so you can turn it into tablet mode and draw away.

Creating designs, presentations, creating music, coding, writing, web design- it’s all possible with Linux. Just like the app store on your phone, there’s bound to be a free program you can use on Linux.

This unlocks the true potential of your device.

13. Get all your emails in one place

Is email management bogging you down?

Tired of switching between multiple email inboxes, or even worse, email providers?

Get an email inbox and get everything in one place. You may already be accustomed to Thunderbird (which IMO is the ultimate email program).

There are plenty of email clients you can grab on Linux:

This will make it a lot more efficient for those that deal with lots of email inboxes (business personal, spam, etc.)

You can receive, reply, delete, and pretty much do anything else in one application. It’s like tabs for each email inbox within one program, which is a huge time-saver so you don’t need to check each one individually.

There are some email apps for Chrome OS, but there isn’t a true alternative that works well. Linux has a lot though.

There are a ton of different ways to customize your desktop with Linux- everything from background pictures, animated videos, or even real-time system stats, like this one:

How cool is that?

You can change nearly EVERYTHING on Linux- UI, GUI, background, themes, buttons, windows, font style, font size, menus, animations, etc. You can even change the system sounds to your liking.

For power-users who only bought a Chromebook for Linux, you’ll be stoked over it.

Other cool things you can do with Linux

Here are some other honorable mentions that you can do as well geared towards power-users.

Remember that even if you get Linux, you can always boot Chrome OS if you want. You can freely switch between the two OS by using hotkeys.

You can run both of them at the same time if you want for some real multitasking.

Interested? Here’s a complete tutorial on how to get Linux.

You may also find these guides handy to get the most out of the Chromebook experience:

Enjoy your Chromebook to the max!

Now that you realize some of the powerful things Linux can do, why not take it for a ride?

With the versatile nature of Chromebooks, they can always be reverted back to their normal states if needed with a Powerwash.

So if you want to play around, go ahead. Even if you screw something up, you can quickly reset it to the defaults and start over.