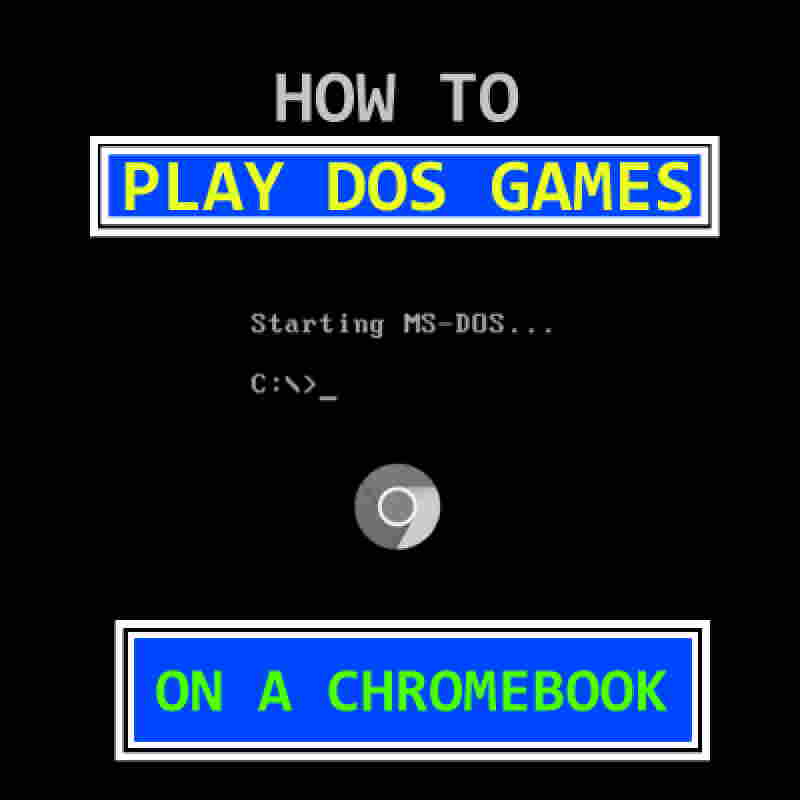 So, you want to play some DOS games on your Chromebook using DOSBox.

In this tutorial, we’ll cover:

Sound good? Let’s get some Doom (1993) up and running on your Chromebook.

How to play DOS games on Chromebook

You can play your favorite DOS games on a modern device- Chromebooks!

This is done through the magic of DOSBox, which allows ChromeOS to emulate a virtual runtime environment directly through the Chrome Browser.

Doing so allows your Chromebook to download, install, and run DOS games without the need for any other special plugins or scripts.

The best part is that you alredy have a HUGE library of free DOS games available. And DOSBox itself is completely free to use.

So basically, you’ll be playing all the classic DOS games (2500+) for free by the end of this tutorial.

What does DOSBox do?

DOSBox is an environment that lets you run old-school DOS games directly through the Chrome Browser.

Given that Chromebooks ship with Chrome, this is an easy solution to play older games (though, you can get other browsers if you want).

For most people, sticking with Chrome is fine and should do the job.

DOSBox has been made into a free extension that plugs directly into the browser for ease of use.

Does it work with Chromebooks?

Yes, DOSBox works with Chromebooks or any other system running Chrome that supports extensions (it works on PC).

How to get DOSBox on a Chromebook

Here are the steps to play some awesome DOS classics on your Chromebook!

First, we’ll need to get DOSBox to allow this emulation. Can you smell the minigun grease in Wolfenstein 3D?

This is necessary because DOSBox requires a directory for your game files, similar to how Steam has that “Games” folder for all games you install.

Launch the Files app (you can search for in your Launcher). This will bring up the UI for the directory viewer.

On the left-hand tree directory, click on the “Downloads” folder.

Right-click, then choose “New folder” (you can also press “CTRL + E” to create a new folder).

Give it a name that’ll be easy to identify (“hey- this is my folder for my DOS games!”).

For this tutorial, I’ll name it “dosbox” for simplicity’s sake.

This is easy enough. Just download DOSBox for Chrome through the Chrome Web Store. You’ll see it show up on your toolbar.

Go ahead and download your favorite DOS games. There are plenty of free directories online you can use to find copies of older games.

Here are some online directories for free DOS titles you can reference if you don’t know where to start:

For this example, I’ll be using the infamous Doom.

Call me biased, but it’s the only game I could spend a whole weekend marathon playing through. Nothing but some cheap earbuds blasting the gritty soundtrack mixed with a few cans of energy drink and a homework assignment that will go in incomplete.

But who cares? I got Revenants to slay.

When you download the file, make sure it’s a .exe file format (skip this step if so). It may be packaged in a .zip file which you can unzip using DOS.

If the files you downloaded are in a .zip file format, unzip them with DOS. Just double-click on the .zip archive and it should open.

Grab the .exe file and click and drag it into your newly created folder from earlier.

So for this example, you’d open doom.zip > click on doom.exe > drag the file into the “dosbox” folder.

Note: The filename may have changed since I wrote this tutorial. Regardless, it’s just an example. Replace it with your own favorite DOS game of all time.

After you drop it into “dosbox,” go ahead and start the program through Chrome. Launch the browser and then the app through the extension.

You’ll see a blank screen, in Chrome, in its own tab. Do NOT start the game yet. If you do, the game will probably run at 200%+ speed which makes the game feel like it’s playing in fast-motion and is unplayable.

But don’t worry, we’ll adjust the settings next.

Step 7: Turn down the speed

With DOSBox up and running in Chrome, click on the question mark icon at the bottom right to adjust the game speed.

Find the option “Configure DOSBox” and open it. It should look like a blank .txt file.

Find the line that reads “# DOSBox configuration file” and enter a new line below it.

Type the following code exactly as shown (or copy and paste it):

If you want to adjust and optimize the app, here’s a reference guide with all the commands.

Step 8: Add the games to DOSBox

Click on the config menu again and go to “Disk Space Management” > “Import Local directory to C:/drive.” It’ll then prompt you to choose the location of your saved games, which is “dosbox” for this example.

Whatever you named it, select it so DOSBox knows where to pull your games from.

That’s all folks. You should be able to play the majority of DOS games directly through your browser on your Chromebook with this method!

Some games will need adjusting, so you can manually adjust the cycles using the same method as before. If you get issues like the game speeding up and slowing down over and over, it could be due to a rendering issue, or your Chromebook’s resources are completely hogged up.

You can try to clean up your Chromebook to bump the performance. If you have a super old one, it may be worth considering upgrading your device to one more suited for gaming.

Perhaps something with a larger screen size so you can enjoy all those 8-bit graphics in full glory?

And that’s how you use DOSBox on a Chromebook. Ready to get some of that old-school DOOM action on your Chromebook?

If you’re having difficulty getting your games to run or you have performance issues (FPS), check out these easy solutions.

And if you still can’t get it working, feel free to drop me a comment!

A simple restart fixes a lot of issues like freezing or crashing (or the game not starting). This means closing out of DOSBox completely and rebooting it.

Chromebooks don’t have F-keys and some games require them. You can enable the F-keys on your Chromebook by using the keyboard settings.

But this is something that most games shouldn’t have an issue with because they’re mainly used for features like quick save and quick load, both of which can be done from the menu.

Sometimes you may get a blank screen when you open DOSBox with no input controls (can’t type or click).

You need to adjust the render output to “surface” or “overlay” to fix this. See this guide.

How to fullscreen DOSBox on Chromebook

You can maximize the game by pressing “ALT + Enter” or going into the config file and looking for the “fullscreen=false” flag and changing it to “fullscreen=true.”

This will maximize the game to fullscreen mode.

If the resolution is off, you can adjust these settings to fix it:

These flags adjust how the game’s aspect ratio, output settings, and full-resolution settings (exactly as they sound) are rendered.

Check out the DOSBox manual for full instructions.

You can press “ALT + Enter” to exit fullscreen mode and toggle it.

How do I open exe files on Chromebook?

Heck, it doesn’t even allow any programs to be installed, so what good is opening an .exe file if you can’t even install it?

The only way to “install” software on a Chromebook is:

This is why we need to download DOSBox from the Chrome Web Store to “open” the .exe DOS games.

Chrome OS can’t do it on its own.

What if I REALLY need to have the ability to open .exe files on my Chromebook?

Well, you can get Linux and a copy of Ubuntu. That’s one solution.

The process is pretty easy:

And that’s pretty much it. Are you ready to play some Daggerfall on your Chromebook yet?

As long as your Chromebook isn’t locked (such as a school loaner or work loaner), AND you have an Intel-based processor, this SHOULD work.

If you have no idea what any of this is, these guides will help:

ARM, MediaTek, and other processors won’t work with Linux.

And any device enrolled in a network by your work or school admin team will likely have Developer Mode blocked by default (the second step).

So this is why you need to have BOTH requirements first.

But if you’re able to do so, you can pretty much run all your favorite old-school games through Linux, no matter the file type.

You can also get Steam games through Steam Link, use other Chrome alternatives, use other media players, etc.

Here’s the guide for getting started with Linux.

Can I use Steam to play DOS games?

Steam does have a library of DOS games that are made to run on modern machines.

Depending on the game you want to play, check to see if it has a Linux port.

If so, you can download Steam, install the game, and play it that way.

Steam is easy to install and all you need to do is get a copy of Ubuntu. The process is the same as usual: Enable Developer Mode > Get Croton > Get Linux > Download Steam.

If it only has a Windows port, you can use WINE through Linux, or Chrome Remote Desktop, which we’ll cover next.

How can I play PC games on my Chromebook?

The absolute easiest way is to use Chrome Remote Desktop.

It’s a free Chrome extension that lets you establish a remote connection. In this case, you’ll be building a connection between your PC (host computer) and your Chromebook.

So your PC does all the heavy lifting (rendering) and your Chromebook acts like an external wireless monitor.

You can technically “play” your PC games anywhere in the world from your Chromebook as long as you have a speedy connection on both endpoints.

Here’s a tutorial on setting that up. It’s written for Fortnite, but it works regardless.

Alternatively, you can use Linux and play them that way. WINE, Lutris, or other emulation programs can build a virtual environment and let you play Windows games directly on your Chromebook. See the above section for a tutorial.

Here are some DOSBox games you can play on your Chromebook:

Are you playing DOS games on your Chromebook yet?

You should have everything you need to download, install, and play your favorite old-school goodies on Chrome OS. If you’ve made it this far, you and I both know there was a time when games were actually good.

And there’s a reason for going this far just to play some “pixelated” games with “bad graphics.”

If you have any questions or you’re stuck, drop me a comment below. Or if you found this tutorial somewhat helpful, please let me know as well.

Thanks for reading. And enjoy the legendary titles on your Chromebook.