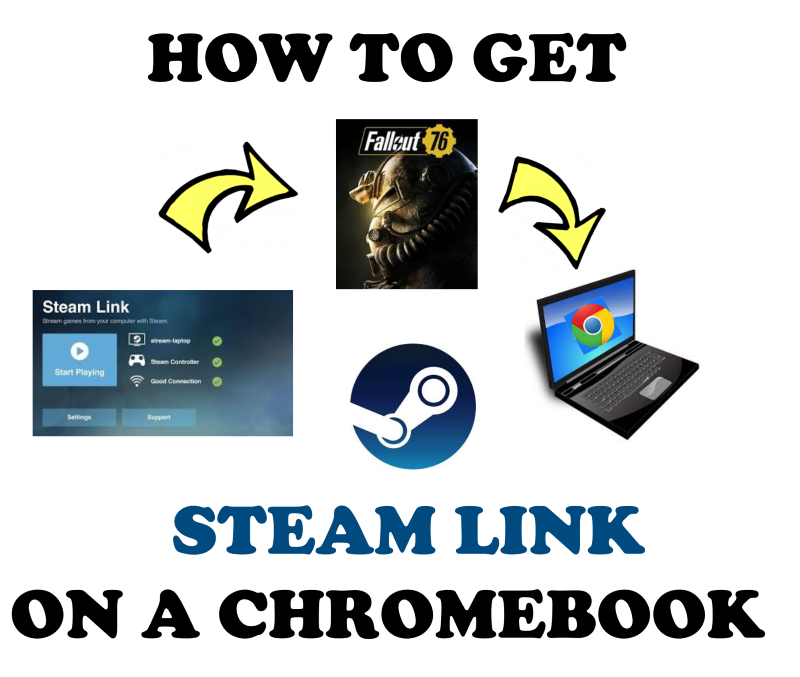 So, you want to install Steam Link on your Chromebook.

Why wouldn’t you want to play your entire Steam library anywhere (in your house)?

Why limit yourself to just your main battlestation when you can be playing some GMod on the couch?

In this complete tutorial, you’ll learn:

You should be able to stream games from Steam using your gaming rig to your Chromebook like a mirror by the end of this page.

If you have any questions, ask me by leaving a comment.

Sound good? Let’s get Steam on your stream!

Does Steam Link work on Chromebook?

You’ll have to have access to the Play Store for this to work.

All newer Chromebooks have the Play Store installed by default. Older ones are hit or miss.

But you can try to get the Android update even if you have an older device by opting into the Beta Channel, which we’ll cover.

How do I connect my Chromebook to steam?

Alright, so here’s the meat of the tutorial.

Getting Steam Link setup your Chromebook is super easy, thanks to the new Chrome OS integration with the Play Store which houses Android apps.

If you’ve ever downloaded any android app on your Chromebook, you know where this is going.

We’re just going to visit the Play Store, download the Steam Link app on your Chromebook, and then set up the connection.

And even if you don’t have the Play Store yet, there are ways to bypass this.

Not all models have the Play Store right now because they’re planned for release sometimes in the future.

Or they’re too old to even get the update.

There are ways to “force” the update onto your machine, which we’ll cover in a bit.

But for everyone else that has a newer Chromebook (all Chromebooks made after 2018 should have the Play Store by default), here are the steps.

Easy enough. Just head on over to the Play Store:

The app will appear in your list of apps on the Launcher. Stick it to your taskbar (AKA Shelf), pin it, or shortcut it!

Launch and play with Steam Link on your Chromebook

Now that you have it downloaded onto your Chromebook, just launch the app.

Follow the on-screen instructions to start streaming your Steam library on your Chromebook.

The app will run the game on your gaming PC to do all the processing (or Mac). But will then stream the game to your Chromebook like a second display.

Pretty cool because this eliminates the need for your laptop to do all the CPU/GPU work and allows you to game directly on your Chromebook smoothly.

Play and stream your favorite game anywhere in your house.

There are only a few main limitations to using Steam Link on your Chromebook:

You’re limited to Bluetooth-enabled controllers that are supported by Steam Link.

So if your favorite controller is some weird third-party pro pad that Steam Link doesn’t support or doesn’t have Bluetooth, it’s not going to work.

WiFi speed is everything

Since you’re controlling (i.e. “playing”) the game on your laptop, how fast the data travels to your PC through your network matters. A lot.

The same goes for the other way around- the speed at which the data travels from your PC to your Chromebook also matters.

You can’t make snap reflexes if you have a slow connection in CS:GO.

You can’t efficiently micromanage your Vault Dwellers and kill those Radroaches in Fallout Shelter.

And you ain’t gonna quickly loot your canned meat without being noticed on a last-gen DSL connection in Unturned.

You’ll need a fast connection both ways to make this actually playable.

The last thing is resolution. Most budget Chromebooks only have a 720p resolution, which means it’s not full HD at 1080p.

You can always adjust your resolution to a lower value, but never higher than native- unless you want a stretched-out, pixelated mess.

If you’re used to playing your games in 4K glory, you’re not going to get the same graphical quality on your Chromebook.

A full high-resolution Chromebook, you’re still limited to the quality of the display (matte vs. glossy), aspect ratio, and even your screen’s PPI.

Chromebooks aren’t made for gaming, so don’t expect the best eye candy.

Even the best Chromebooks aren’t on par with a basic 1ms FHD display that you’re used to on your PC.

Let’s face it- even the Chromebooks with nice keyboards don’t compare to a basic cheapo mechanical keyboard.

The keyboards on these devices are equipped for casual usage or for productivity for business pros.

Rarely were these designed to play some hardcore FPS games or mind-numbing strategy games on.

So you’re kind of stuck with the keyboard on your machine.

However, the mouse can be replaced with your 12-button, LED-lit, customized and programmed functional hotkeys, dual-mouse wheel, wireless mouse.

Now you can play Realm of the Mad God using all the keys.

All you need is a compatible USB mouse and you’ll be all set.

Not to mention that the keyboard isn’t the best for gaming either.

The keys have minimal travel and really aren’t made for quick reflexes or slamming into the table after your Tidehunter gets killed before he releases his Ravage in Underlords.

Or some rando doesn’t know how to play their role in DarkRP on Garry’s Mod.

Plus, you don’t get all the shiny LED lights either, even with a backlight.

I wouldn’t recommend taking game seriously on your Chromebook. It’s best used for casual games like Rimworld, Adventure Capitalist, or maybe even RotMG?

Steam Link and the Chromebook keyboard

The keyboard on your Chromebook works and the touchpad should be the same deal.

The app picks up your keyboard and touchpad on your laptop and sends it to the host PC.

Depending on your connection speed, this is what makes or breaks the game. If you have a less-than-perfect connection, you’ll end up with some serious lag or input delay.

Not worth playing high-stakes games like Warframe or PoE.

You’ll have to get a faster connection or use an external mouse to alleviate the touchpad lag- this may help since the touchpad is kinda weird to translate to a mouse click.

What controllers work with Steam Link?

Steam Link works with many different controllers, so you should have no shortage of trying to get your favorite gaming pad to link up.

It’s only when you use a random brand that’s unsupported when it becomes a problem.

Other controllers that are said to be working are:

Note that the Steam Controller does NOT work through Steam Link on a Chromebook.

This is something to keep in mind since you’d expect it to, right? It is their own hardware after all.

How to use a PS4, Xbox One controller on Chromebook

Steam Link with only a few confirmed controllers Chromebook, as long as they support Bluetooth.

Personally I’ve only gotten my Xbox One controller to work.

Here’s how I paired it:

Slow connection? Lag and latency problems? Can’t get those last hits on the creeps?

Here’s how to squeeze the best performance possible and reduce lag while using Steam Link:

This will help get you a way stronger Internet connection to your Chromebook which means reliable packet upload and download.

Can I use my PC while using steam Link?

Yes and no. Steam Link allows you to do whatever you want while it’s running in the background.

You can browse the ‘net, look at our desktop, and even play non-steam games all while streaming.

But some applications and programs may act weird when broadcasted over Steam Link.

Some full-screen games, movies, and programs may be glitchy, slow, or just plain broken.

But for the most part, if all you want to do is browse the Internet, you’re able to do so even if you have Steam Link running.

This works best with a multiple monitor setup. You can have Steam Link on one monitor and the other one with your browser running.

Then you only broadcast the ones with your game to your Chromebook while your other display does another task at the same time.

Though why you’d do this, I’m not sure.

The only scenario is if you’re playing games on your Chromebook and someone else is on your PC.

Other things you can do with Steam Link on your Chromebook

Here are some things that you may be find useful once you have the app up and running.

You can stream your entire desktop on your Chromebook and do anything you want.

This means you’re basically remotely connected to your PC and works just like Chrome Remote Desktop.

Steam Link syncs in real time with your “big picture” settings and can be used as needed.

Steam Lnk also works with non-steam games and you can customize your keyboard/mouse or generic controller config so you can match whatever you’re playing.

This means you can fire up other games outside of Steam and play them through the app.

When I tried this, there was nothing but a glitchy, laggy mess. Maybe I didn’t map everything correctly and it messed up my input scheme. Or my connection just sucked.

Other alternatives for streaming games on Chromebook

Because of the software and hardware limitation of Chrome OS, your streaming options are limited for games.

Other than Steam Link and Stadia, there’s not much else you can do for gaming.

For everything else like streaming shows and movies, Kodi, and Plex, you have plenty of options.

Google Stadia is the new cloud-based “console” for games.

This is largely still in beta and could be something you could look forward to using for playing even the most demanding games on Chrome OS.

Because I don’t own one, I can’t write much about it. At least right now =].

Get Steam or Windows

If you don’t want to use Steam Link, then just get the actual version of Steam and play all the Linux-enabled games directly through it.

Or use CodeWeavers CrossOver and run Windows programs.

Did you get Chrome OS connected to Steam Link?

The process is straightforward and easy enough.

The only real requirement is to have access to the Play Store and a fast WiFi connection.

That’s it! That’s all you need to start streaming Steam games to your Chromebook with ease.

If you get stuck, post a comment below and let me know. I try to respond to all comments within 24 hours.

Or if you found this tutorial helpful, let me know also =]. Consider telling a friend so you can dominate the map. On your Chromebooks.

3 thoughts on “How to Get Steam Link on Chromebook (Easy)”