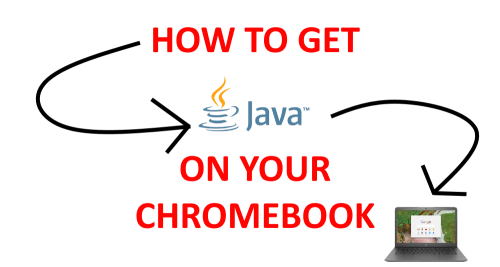 So, you want to install Java on your Chromebook.

Maybe you want to play some games like Minecraft or various Steam games. Or you just want to run some web pages that require Java.

This should take no longer than an hour and I’ll go over it step-by-step.

Note that this does require some technical knowledge and coding, but it’s okay.

But don’t worry, this tutorial is written so that even a total newbie can follow along!

Sound good? Let’s get Java on your Chromebook!

This method is still working as of 2022. If you have any problems getting Java running, leave me a comment and I’ll check it out. You’ll need at least Java 8 to run most modern programs on Linux using your Chromebook.

How to enable Java on Chrome OS

First off, you can’t. But we have a secret, juicy workaround.

That’s the simple answer. Chrome OS is built for security, so third-party programs, installations, and Java Runtime Environment (JRE) are all disabled and blocked within Chrome OS. So basically, Chromebooks can’t run Java by default.

Are there ways to get around it? Yes. The easiest way is to install Linux, which you can think of as another operating system. Chrome OS is one and Linux is another. Linux allows Java. Chrome OS doesn’t allow it. We want Linux.

To get Linux, we’ll have to do a few things like enable Developer Mode, which allows you to perform more functions on your Chromebook. Think of it like administrator privileges on your device.

This will let us run the command line, which is what we’re most interested in. Don’t worry if you don’t know the first thing about coding- I’ve got you covered =]!

This used to possible, but now not so much anymore. Back in 2015, there was a way to install Java on a Chromebook without using Linux, Ubuntu, and Crouton, but required major tweaks and adjustments- much more than it’s worth nowadays since it’s not guaranteed to work.

It’s much easier to just stick with the nearly 100% working method of using Linux and Ubuntu to run Java on your Chromebook. This method works for the majority of Chromebooks and is pretty easy to do (that’s if you use this awesome tutorial =]!).

With Linux, you can run java and do a bunch of other things, like running Java games or installing and playing Steam games such as:

So, Linux is the way to go!

Ready to get started? Let’s go.

The first thing we need to do is make sure your Chromebook meets the hardware requirements. This is pretty simple to do and only requires a few steps.

We’ll be installing Linux on your machine, because that’s the only way to get Java running.

For starters, you’ll need an Intel-powered Chromebook. I’m sure you know how to tell what you’re running, right?

If not, don’t worry. Here’s a quick way to find out:

It doesn’t matter if you have an Intel Celeron, Pentium, m3, i3, i5, i7 or whatever else. As long as it’s Intel, you can get Linux.

A lot of the newer models out there are powered by Intel, so if you have a newer machine, you should be all set!

Update: Even in 2022, this method only works with Intel-based CPUs. If you don’t know what you have, I wrote a tutorial about how to check your specs.

Please note that ARM-based CPUs won’t be able to pull this off.

RAM and storage aren’t that important. A basic setup of 2GB of RAM and 16GB of SSD storage is enough. Don’t worry too much about this one.

16GB of storage is enough to install Ubuntu but doesn’t leave much space for much else. Expect to use up about 8GB for Linux, apps, games, programs, etc. you’ll be splitting the space in half for both Linux and Chrome OS, so if you have to be someone who downloads a lot of apps, games, doc’s, videos, images, etc. You may want to install Linux on a separate drive.

If you don’t want to install Linux directly on your machine, you can use install Linux on a USB drive to plug into your Chromebook. You can do so.

Make a back up of your Chromebook

You can back up your Chromebook in two ways:

Backing up to Google Drive is a lot easier since you don’t need to mess with anything other than your Chromebook. Using an external drive requires some fiddling if it’s not a popular drive (Chrome OS seems to only recognize the popular drives), and using something like Dropbox requires that you sign up and make an account (who has time for that?). Google Drive is already created for you since you have a Google account and everything can be backed up instantly.

You can access your Drive here. Backing up is easy. Just launch the Files app on your Chromebook and drag and drop the objects into the Drive folder on the left-hand menu.

Backing up to an external drive should work the same way. Just plug in the USB drive or SD card and drag and drop the files into the left-hand menu and you’re done! If you don’t have one that’s compatible with Chrome OS, you can check out this buyer’s guide.

You should back up all your data that you want to keep, including stuff in your Downloads folder or custom folders/directories you’ve created. Note that all your Google Account data will remain intact. You won’t lose anything like Gmail and such. Only offline local data is wiped- this includes Chrome apps, Chromebook apps, Play Store apps, and your Chromebook settings.

Should you get stuck, you can check out this guide on backing up your data. It covers everything you need to know!

Okay, so you’ve gotten all your stuff saved. Right? Time to proceed to the next step!

Turning on Developer Mode on your Chromebook is super easy.

All you need to do is follow this guide. When you’re done, come back here and continue. I’ve written about the process so many times I could write it in my sleep!

If you want the basics, here’s how:

Step 2: It’ll then show a warning message after it reboots. Press “CTRL + D” after reading it.

Step 4: Your Chromebook will reboot with a new warning telling you that OS Verification is OFF. This is good. This will let us enable Developer Mode.

Step 6: Your Chromebook will enter Developer Mode. This may take up to 20 minutes. Be patient.

Step 7: After a final reboot, you’ll be able to login to your newly Dev Mode-enabled machine! Have fun!

Now that you’re in Developer Mode, you can install Ubuntu Linux, which will let us get Java on your Chromebook.

We’ll be installing Ubuntu Linux in this tutorial because it’s the most well-supported and documented version of Linux. And I’ll be installing the Xfce desktop- it’s a minimalist version of Ubuntu so it doesn’t hog all your Chromebook’s resources so you can run Java and actually do what you want to do with it- play games, etc.

You can install other distros like KDE if you want a more modern desktop. Check out this Linux tutorial for more information.

Otherwise, just follow along and let’s get Linux installed on your Chromebook.

So the first we’ll need to get is Crouton. This is the “program” that installs Linux. You can get Crouton here. After you download it, make sure it’s in your Downloads folder or else the code won’t work!

After you download Crouton, press “CTRL + ALT + T” to launch the command line.

You’ll see a black and white window pop up that looks similar to MS-DOS for those nerds out there (me being one of them =]). When you see this, type in the following command exactly as shown- without the quotes:

Crouton will then install Linux. This takes some time, so be patient.

After it’s done, type the following to launch Xfce:

And you’re in! Congrats. You’ve installed Xfce on your Chromebook. If you get stuck, leave a comment and I’ll get back to you ASAP.

Install and enable Java on your Chromebook

And now for the fun part. Getting Java!

We’ll be installing the default JRE/JDK. This will run Java programs required on Linux. We’re going to install Default OpenJDK, which is the currently the newest version of Java for Linux.

This would be Java 11 at the time of this writing. Getting the latest version of Java can always improve framerate and smooth out your experience!

Installing it is super easy.

You can do so with just a few lines of code. So here’s how to get Java on your Chromebook:

That’s it. You now have Java Runtime installed on your Chromebook!

Other ways to install Java

Didn’t work? Try these commands instead.

This is a good backup if the previous section didn’t work for you. This will install OpenJDK 8, which is still a commonly used version of Java.

Launch the command terminal and type in these two commands:

You can install the JDK to run Java programs or compile them on Linux. JDK contains the JRE, so you should be able to run all Java programs on your Chromebook.

To install it, launch the command prompt and type the following command:

Try installing the Oracle JDK. If OpenJDK didn’t work, you can use the basic Oracle JDK which is officially distributed by Oracle, the company that developed Java.

Launch your command prompt and type in the following commands:

If you’re still getting problems, leave a  comment and I’ll get back to you ASAP!

You now have Java on your Chromebook!

Congrats! You’ve not successfully installed Java on your Chromebook and you can play Java-based games, do Java-based work, or visit Java-based sites.

If you couldn’t get it working, just let me know by leaving a comment.

If you found this tutorial to be helpful, leave a  comment and let me know. Consider telling a fellow Chromebook owner and being a hero =].