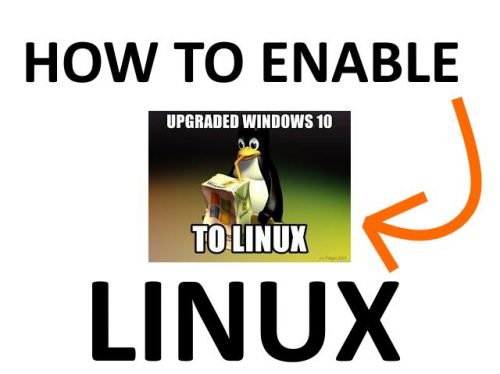 So, you want to learn how to use the built-in Linux (Beta) feature on your Chromebook.

This comprehensive tutorial will cover everything you could possibly want to know about the new Linux (beta) feature and what you can do with it- broken down into super easy to understand wording.

With the Linux feature built right into Chrome OS, you can do things like get Windows native programs, use Linux features, and even play games built for Windows or Mac (or Linux) straight on your Chromebook.

And I’ll teach you how to do all of it.

How does that sound?

Last updated: 1/4/22. This page has been checked for accuracy and updated accordingly. The process remains the same. Linux is still a beta feature and continues to work as it should. I still recommend the old-school Croton method for best compatibility with Linux games and software.

Getting Linux (Beta) on your Chromebook

Chrome OS now has built-in Linux- as you probably know.

Ever since Chrome 69, users can now use Linux directly on their Chromebook without having to install it using Crouton and typing in code.

You also now don’t have to toggle back and forth between Chrome OS and your Linux distro (Xfce, KDE, etc.). The OS (or kernel, rather) exists right there within a tab on your Chrome Browser.

One thing to note is that Chrome 69 does bring Linux support, but some users have reported difficulties in using it. If you don’t see the feature, you may have to update your Chromebook to the latest version of Chrome.

Update: The majority of devices out there now support Linux (Beta). But if you’re using a school or work managed Chromebook, this feature will be disabled by default. You’ll need to get permission from your admin team to unenroll your managed Chromebook.

It’s as easy as toggling a switch in your settings page. Seriously.

You can check what version you’re running by doing the following:

Note: You need to be at least on version 69 or higher.

You can easily update your Chromebook to the latest version by doing the following:

Congrats. You should now have the latest version of Chrome OS with Linux beta!

Still can’t get Linux on your Chromebook?

Even if you have the latest version of Chrome OS, the feature is still in beta- as the name says.

Not all Chromebooks will be able to run Linux directly yet, as it’s still rolling out slowly. There’s no current list of Chromebooks that have Linux beta built-in, so you’ll need to be patient until Google rolls out the update to your particular model.

If you really need Linux on your Chromebook, you can always do it the tried-and-true old fashioned way by using Crouton to install the operating system.

I’ve written a ton of tutorials on the subject, and if you don’t want to browse through a ton of guides, all you need is this one.

It’s a comprehensive guide that covers everything you’d want to know about installing Linux on your Chromebook. And if you run into difficulties or have trouble, you can just leave a comment here (or there) and I’ll try to respond ASAP and help you out.

Switch to the Beta Channel

Another option you can try is switching to the Beta Channel.

By default, you’re on the Stable Channel, which is where everything is tried and tested for production environments and should be working (or mostly working)

There’s also a Beta Channel, which is exactly what it sounds like- for testing out new features, releases, updates, and other goodies which have left a development environment (which is what the Developer Channel is for) and are ready for a select group of public testers.

Note that you should definitely back up your Chromebook before switching to the Beta Channel.

You can switch to the Beta Channel easily by doing the following:

Step 4: Look for the option to switch channels, and select the Beta Channel.

I wrote detailed instructions on how to switch to the Beta Channel previously in another article. Just skip directly to the part that covers switching channels- it should be straightforward. Should you get stuck, leave a comment here or there and I’ll get back you ASAP.

You’ll now be in the Beta Channel of your Chromebook. You can switch back at any time by just going back to the Stable Channel by repeating the same steps above.

If you broke something, don’t worry. Just do a Powerwash and it’ll revert everything back to normal.

How to use the Linux (beta) feature on your Chromebook

Getting Linux enabled on your Chromebook is super easy. If you already have Chrome 69 or higher, you likely already have the update.

You can quickly get started by getting into your Chromebook’s Settings screen by launching the Chrome Browser and then typing in “chrome://settings” and hitting Enter.

This will bring you to your Chromebook settings.

You’ll find an option for Linux (beta) that you can toggle by hitting the “Turn on” button to enable! So hit that button!

Then you’ll see a nice little splash screen that reads something like “Set up Linux (Beta) on your Chromebook.” This is good.

Just hit the big blue “Install” button in the corner.

For max compatibility, like if you’re going to be gaming or using Linux as your main OS, you’re more suited to just get the full desktop version.

Be patient as Linux downloads and installs to your device

After this, your Chromebook will take about 2-7 minutes to install Linux. This will vary depending on your hardware and connection speed.

When it’s done, you’ll be greeted with a command prompt (the small window with the black background and a single line asking for a command in green text). At this point, you’ve officially enabled Linux on your laptop! Congrats!

What you choose to do at this point is your choice. You can browse the Linux beginner guides to see some cool things you can do with Linux on your Chromebook, or you can start installing some games like:

Or you can just use the search bar on this page and type in whatever game you’re looking for. Chances are, there’s a guide for it if it’s a popular game.

So now you see this unfamiliar screen with a blinking cursor.

What are you going to do? The first thing you should always do is update to the newest version of everything. To do this, try your first Linux command.

You’ll see Linux spit out some lines telling you exactly what it’s doing and it’ll update the system automatically. You just updated to the latest packages with a single line of code. Wasn’t that awesome? It’s even easier than updating a Chromebook!

Next, you’ll probably want to install something to make your life a little easier. I mean, installing stuff with commands is always fun, but what about if you want to look at pictures and browse programs to install- like the way you’re probably used to on Windows or Mac (or even on your current Chromebook?).

Download the Gnome Software Center to make your installations easier!

We can get a software center called the Gnome Software Center. And we can install it like this:

After you punch that in and hit Enter, you’ll be prompted with a warning confirming if you want to install, just hit the “y” key and it’ll do its thing.

After it’s done, you’ll see a new icon appear on your Shelf (i.e. Taskbar) that reads “Software.” go ahead and click on it. This will automatically the Gnome Software Center directly on your Chromebook.

You’ll see a nice library of programs you can install without having to use commands. You’re probably already familiar with this, as it works the same way as the Play Store or Chrome Web Store.

Get all the programs you want! Experiment! You now have Linux activated on your Chromebook!

Here’s a nice video that shows off the GSC:

What can you do with Linux on your Chromebook?

Well, a lot of things.

First of all, you now have a complete kernel that you can run pretty much any program in existence- all on your Chromebook. You can play games, edit videos, get word processors, browse the net, and pretty much do everything you could ever want on a computer.

This will get you pretty much anything you could ever want directly onto your laptop that could once do only browser-based stuff. This unlocks a whole new world of possibilities of things you can do with your Chromebook!

Get some awesome Linux software to get you started

Here’s a random list of Linux programs that you can use right away. They’re all free and do wonderful things:

You can search for these in the Gnome Software Center or download them with command lines if you’re feeling awesome.

Should you want to install something that doesn’t exist in the Gnome Software Center, you can directly install the .deb file of the program.

For example, if you wanted to install Minecraft, you can go here and download the minecraft.deb file. With that, you should be able to just double-click the file and it’ll work just like Windows!

If it doesn’t, you can get something like gdebi to execute .deb files.

But remember, Linux is still entirely in beta as dictated by the name “Linux (Beta),” so don’t expect everything to work properly.

Over time, this integration will be ironed out and updated so that it becomes more productive and practical for usage. Right now, it’s still early in its release.

Update: The majority of models out there now have the ability to use Linux Beta. If you still don’t have it, you probably won’t get it.

Did you get Linux on your Chromebook?

I hope this quick tutorial provided you a way to easily get Linux running on your Chromebook without having to use Crouton and going through the old-fashioned way.

But if you need Linux and you don’t have access to Linux Beta, you can the older, alternative technique to get it up and running!

And if you have any questions or get stuck, please leave a comment here and I’ll try to get back to you ASAP.

Also, if you’ve found this guide to be helpful, let me know as well. Consider telling a friend =]!