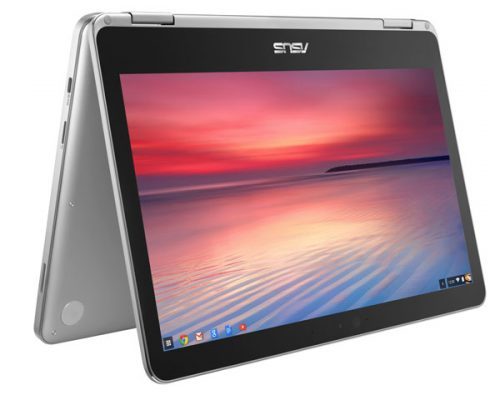 The Asus Chromebook C302CA has just been leaked, following the wake of Samsung’s Pro.

This is Asus’ successor the ever popular Chromebook Flip. It comes with more power, features, and costs you more money.

Is it worth it? Let’s take a look.

(Is it just me, or are all these “leaks” done on purpose to stir up the news? Are they even really leaks? It just seems like every other laptop  gets “leaked” before launch now.)

Moving on, the Asus C302CA is a convertible, flip-style Chromebook with a full 360-degree hinge.

If you’ve never seen a laptop like this before, it’s really nothing new.

The display can rotate in a full circle and can fold over backward to turn your laptop into a tablet- hence “convertible.”

Convertibles are good for WFH employees who do online meetings. It can switch between tablet for mobile portability when you walk around your home during a call, and tent mode to put on your table or work desk.

This is probably the new standard for Chromebooks now, but it’s nothing new. The C302CA doesn’t really please in appearance when compared to the Samsung Pro.

This is standard nowadays for high-defintion content (videos, pictures, text, etc.). You’ll also be able to see your colleagues and peers in crystal clarity.

I’m assuming the screen will be a touchscreen as well, as many laptop makers are now building them to accommodate the Play Store update. Running Android apps on Chromebooks will be a common thing, so it’s only necessary that the laptop itself can convert into a tablet form- and has touchscreen capability.

This will make the device more able to transition the apps over from a native smartphone environment onto a laptop.

And it’ll feel slightly less awkward for the user.

Think about trying to use an app designed for your fingers on a keyboard and mouse. Or even more weird, a keyboard and touchpad. And with Andromeda coming, Android and Chrome OS will be even more closely integrated. This is why they’ll need to create hardware that can keep up with software.

The C302CA is decent under the hood.

It features an Intel Core M3-6Y30 Skylake processor, which is pretty powerful and new to the scene.

It also has a whopping 8GB of RAM, which is quadruple the standard 2GB on the majority of these laptops. You also get 32GB of storage, which again, is double the standard 16GB, so you have a laptop that’s above average in specs.

Update: According to Asus’ product page for the Flip 2, it has upgradeable options from 3 different CPUs and 4 or 8GB of RAM with 32, 64, or 64GB of storage. It also has a chiclet illuminated keyboard. That’s pretty cool. It’s one of the few Chromebooks that has a backlit keyboard.

This makes it well-equipped for apps, work, videos, streaming media, photography, and of course, play.

With a nice setup like this, it should be able to hand pretty much anything you can throw at it- that is, anything within Chrome OS’s ability.

It’ll also come loaded with all the regular input ports, such as audio, WiFi, Bluetooth 4.0, microSD, and two USB-C ports. You have all your basic connectivity right here.

It may have stylus input

As for stylus input, there’s a single image floating around that hints at the C302CA being a pen-input device, which means you can write on the flip screen.

The original Asus flagship laptop was the Asus Chromebook Flip, which was one of the original trio of Chromebooks to first get the Android app update.

Update: The C302A doesn’t have any stylus input- just a basic touchscreen.

But, let’s not forget what else gets an upgrade- the price.

That’s indeed a big jump, but for a Chromebook that’s built for app integration and has a ton of raw power under the hood, it’s worth it. However, you should also take into consideration that Samsung’s Chromebook Pro also has a lot of the same features, but for a slightly cheaper price. It looks like these two laptops will duking it out for the market share.

Overall, the C302CA looks promising. Compared to the Samsung Pro, it’s not as pretty (no metal body) and it’s more expensive.

We’ll have to see how this one plays out. Personally, I think the market’s leaning towards the Pro. It was leaked before the C302CA was, and it got a lot more thunder. Then again, news coverage isn’t always praise. I’ll be reviewing both when they release.

Update: The Flip 2 is now a lot cheaper than the original MSRP. It’ll only run you about $460 at the time of this update. That’s still pretty pricey, but compared to the Samsung Pro, it’s a worthy competitor. According to Asus’ website, this laptop

I’ll keep you updated with price drops. Subscribe to the email list if you’re watching this laptop.