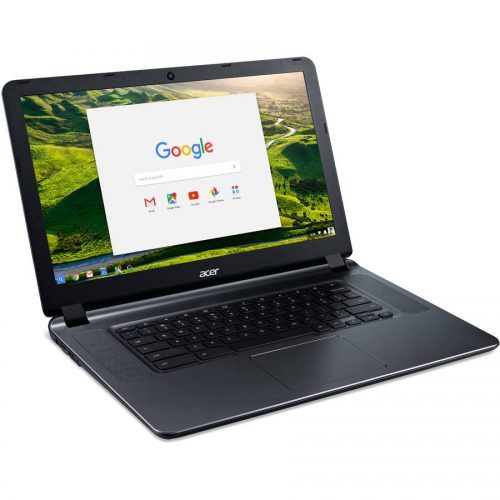 The Acer Chromebook 15 is a pretty sweet deal.

Sure, it’s not that pretty.

Big bezels. A lackluster keyboard. And a frame from the ’90s.

Reviewers around the web seem to be calling the Acer 15 just “another” Chromebook.

Well, what do you expect? It’s not supposed to be groundbreaking. It is just “another” Chromebook.

But there is something special about it.

It’s pretty cheap and affordable for what you get. It costs less than $170 for a huge 15” screen.

This is a brief review of the Acer 15.

(All prices mentioned in this article are accurate at the time of the last update and are subject to change.)

It’s not pretty. But…it’s not expensive either.

The Acer 15 sports a whopping 15.6-inch screen with a decent display resolution of 1366 x 768 pixels. That’s pretty decent for those who can’t stand staring at tiny text. Personally, I like it big.

This is one of the Chromebooks with the biggest screens you get your hands on. The resolution is decent at 720p for a 15.6” screen.

You get pretty much the same specs as the previous models, such as the standard 16GB of onboard storage and 2GB of RAM, which is standard for all Chromebooks, no matter the model or manufacturer. This is enough power for basic everyday tasks like checking email, browsing the web, watching videos, or getting stuff done.

The Acer 15 is kind of dated now compared to newer Chromebooks released in 2017.

But if you’re just looking for a cheap Chromebook with a giant screen, this is a perfect pick-me-up. It’s actually not that dated. The spec sheet of this giant is still in use today in a few budget models. In other words, there are still a lot of laptops that only have 2GB of RAM and a 16GB SSD. It’s really not that far behind.

The 2GB is enough to handle basic multitasking and the CPU is equipped to blaze through your daily tasks. With Intel HD graphics, it can also handle games, videos, and images with ease. You can even get away with doing basic to moderate photo-editing on this thing. The IPS display and screen size only help. I mean, who’d want to do image touch-ups on an 11.6” screen? You might as well use a tablet.

Lots of battery for a big screen

You also get a nice whole 12 hours of runtime on a single charge, which makes this a pretty efficient laptop for the essentials- reading emails, watching YouTube videos, or typing up an essay- pretty much simple tasks like I stated earlier. It also features an Intel Celeron processor, which is actually pretty decent and has some power under the hood. It’s enough power to play some awesome games, multitask, and even install Linux if you’re handy enough.

Think about it: Linux on a Chromebook with a 15.6” experience for less than $170. Imagine playing some Steam games on it. How’s that to get you drooling?

And if you want a full HD display, it also comes with an upgraded display at a higher cost.

Typically, if you want the sharpest image possible, you’d want to get a very good resolution on a smaller screen. Getting a big screen with a low resolution just results in pixelation. Therefore, if you want the best possible picture, you should opt for the upgrade.

However, with the base specs being so…basic, it makes you wonder if this laptop can even handle a full HD experience. Rendering a better picture requires more resources from the CPU. Though the Acer 15 has Intel HD graphics, it’s pretty limited.

If it’s not powerful enough, the laptop will stutter and lag. I guess it really depends on what you’re doing. If you’re just watching some HD movies, it should be fine.

But if you’re trying to play a game with gorgeous graphics, it’ll probably lag. Again, it depends on what you’re going to use it for. That’s the bottom line.

The Acer 15 make an excellent secondary computer though.

If you like to work with multiple monitors or computers, you could easily use this as your secondary computer with that sweet 15.6” display.

I can see coders, gamers, and developers easily taking advantage of a cheap secondary computer. I mean, a monitor these days can easily cost more than this laptop itself. Why not just buy this laptop and use it in a dual monitor setup? You can get a whole Chromebook cheaper than a single monitor. Just think about that for a second.

With Chrome OS being such a fast and zippy experience, you could look something up or pull something up instantly. And with the all-day battery, you can leave this Chromebook to the side and use it whenever you need it. Chrome OS is built to be fast and performs basic to moderate tasks well (and much faster) than Windows-based machines.

So if you need another computer for a very affordable price, check out the Acer 15.

You should definitely consider looking at newer laptops though before you make your purchase. If you’re looking for more power and a newer Chromebook, check out the Samsung Pro, which offers performance that blows out many high-end Windows computers, and even some Macs, if you look at it from a spec-only perspective.