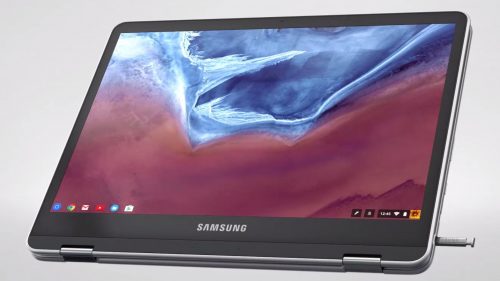 If you think about traditional Samsung Chromebooks, you picture high-quality, affordable, and well-built laptops. That’s about to change.

Some techy users over at Chrome Unboxed discovered some product listings for Samsung’s upcoming Chromebook, called the Chromebook Pro. This is all supposed to be hidden from public view until it actually comes out, supposedly. They even uncovered a landing page (sales page) for the laptop, but it was removed.

What’s so special about the Samsung Chromebook Pro?

Well, for starters, it’s not cheap. Samsung has been catering to the budget-friendly Chromebook crowd, but now they’re bringing out the big guns. The Chromebook Pro is a performance Chromebook designed for those power users. This is pretty much the “Macbook of Chromebooks” for Samsung.

It features a 12.3-inch screen with a convertible body, similar to the Chromebook Flip with a 360-degree rotation. But don’t mind the smaller screen size. It also has a whopping 2400 x 1600 resolution, making it a full-HD Chromebook with much more power than other high-resolution laptops. This will make images, videos, and other media super sharp. It can basically play anything in HD. Whoa.

Other than that, it comes with a touchscreen display, which is perfect for the Play store release, as it’s a Chromebook on the list for the Android update. It even has support for a stylus, which means you can turn this Chromebook into a drawing tab. Rumors say that the landing page hints at the ArtCanvas app being installed by default onto the Pro, which implies a workstation for artsy types or designers. The stylus integration should also work with Android apps as well.

The Chromebook Pro is built with a metal body that measures only 0.55 inches at the thickest point, which is thin and has that sleek, expensive look (well, it is).

Under the hood, it’s got a six-core ARM processor at 2GHz. RAM is unconfirmed. The battery should run about 10 hours on a full charge. The onboard memory is also unconfirmed. However, the RAM and SSD storage should have options, like many Chromebooks do now.

And how ’bout the price?

The base price is $499 for the Samsung Chromebook Pro. this is nearly triple the price of an entry-level Chromebook. And it’s also unlike Samsung.

However, many manufacturers are moving towards high-end Chromebooks as well as offering budget and cheap Chromebooks. HP, Acer, and Dell all have their performance Chromebooks. And now Samsung joins the crew.

How will it compare to the other Chromebooks in the market? We’ll find out.