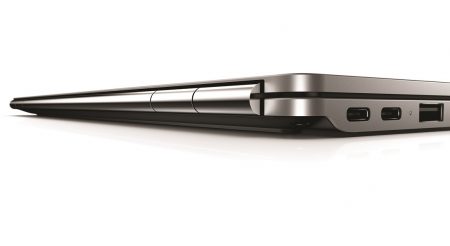 It’s a super powerful Chromebook that puts some other laptops to downright shame.

The HP Chromebook 13 is the laptop that ranks with the premium Chromebooks such as the Google Pixel.

Yes, premium. It comes loaded with power and features you wouldn’t really expect from a Chromebook.

Typical Chromebooks only have 2GB of RAM. This has been the standard since launch. A bare 2GB is the minimum.

Today’s modern variants typically have 4GB, which is double the standard.

The HP 13 Chromebook is a beast. It’s powerful and blows all modern laptops out of the water.

It comes in four variants.

You can get it with your choice of an Intel Pentium, M3, M5, or M7 CPU with 4GB, 8GB, or 16GB of RAM. This doesn’t mean mix and match. Each increment of RAM is tied to a certain CPU. And each tier up means a pricier laptop.

For this article, we’ll be going with the Intel M3 with 4GB of RAM.

The RAM is 4GB of LPDDR3-1866 SDRAM. This is super fast RAM. You’ll be able to multitask on this thing without a hitch. This is serious power.

A lot of other budget laptops only have 2GB (or even 1GB) of RAM. You’ll be able to blaze through multiple apps, have tons of tabs in Chrome, and listen to music while playing games while watching a movie all at once.

With power like this, it’s something to be reckoned with.

It’s not quite as powerful as the rumored Pixel Chromebook 2, but it’s a pretty powerful laptop.

The debuted Google Pixel is also a premium Chromebook with a price tag similar to an entry-level Mac Book Pro. And now with HP coming along, there’s going to be more competition for the “best Chromebook” ever.

Update: Today’s Chromebooks still don’t even set foot in the same territory of performance of the HP 13, even though it’s dated now. It’s got that much power.

Let’s get under the hood and check out the specs of this beefy laptop.

It’s powered by an Intel Core m3 CPU (6th Generation) clocked at 900MHz with Intel Turbo Boost up to 2.2GHz) This is a two-core processor which easily trumps other CPUs found in Chromebooks, like the Intel Celeron (which is used in a lot of budget variants).

This gives you all the processing power you could want. It’s fast. It’s snappy. It loads up apps and web pages in a snap. With this much power, you can do some serious gaming on this Chromebook. If you’re not a gamer, it’ll handle whatever you need to do without a hitch.

As mentioned earlier, it’s got 4GB of super fast RAM as well. This is good for multitasking and having multiple apps running sumptuously.

It’s got 32GB of internal SSD storage. Again, this is double the standard 16GB you typically see on entry laptops. Everything with the HP 13 is double- RAM and storage.

The HP Chromebook is powered by Intel’s new high-performance processors. Thankfully, HP will introduce this new line of laptops in four different models to make it affordable for all levels of laptop users.

It’s a powerful laptop and you get a very nice spec sheet.

The first thing I noticed the brushed aluminum. HP’s new line of Chromebooks all have a very modern stylistic design with a full aluminum body. I dig this look.

The Samsung Series 2 and 3 Chromebooks had a leather-like stitching on the lid, which was nice and made it look moderately priced, however, an aluminum body is really my thing.

Aluminum looks sturdy, durable, and horribly expensive. It’s really a matter of preference. Some people prefer the leather, and others prefer the aluminum. However, I think both of them are much more aesthetic compared to traditional hard plastic.

Update: The newer Samsung Pro and Plus also have aluminum bodies as well.

HP will be offering the laptop in four different models at four different price points. The only variation between the four models is the processor and the RAM capacity.

Everything else remains the same, other than the price.

Let’s start from the cheapest to the most expensive one:

No doubt that this laptop is freakin’ is expensive. But you get what you pay for.

(Looking for an affordable laptop? If you want a cheap Chromebook, check out the buyer’s guide for the best Chromebooks under $200. Or how about the cheapest Chromebook on the market?)

Update: You can easily get one now for under $500 since it’s dated. This a steal considering it still has more powerful parts than today’s laptops and it has a 3K display.

Although you get the variation in the processor and RAM capacities, every single model comes with a bunch of impressive features under the hood.

The screen is a full HD 3K display. It’s one of the few Chromebooks that has such a pixel-dense display.

The 13.3 inch IPS display also has a 170-degree viewing angle in a 16:9 aspect ratio, which is amazing for watching videos, playing games, or viewing images.

It can pretty much connect with any modern device. You’re covered. Don’t worry.

It’s thinner and lighter than a MacBook Air

The laptop itself weighs just 2.86 pounds and it’s just only 0.5” thick. By comparison, that’s thinner and lighter than the Apple MacBook Air 13.

If you think Apple’s design is impressive and justifies the price point, well here’s a Chromebook that’s cheaper and is even thinner and lighter.

HP also stated that the laptop will have a full-sized keyboard with a backlight as well as Band and Olufsen speakers for audio output, which is new to Chromebooks.

HP also offers the USB-C docking station for $149, which simply plugs into the USB C port on your PC monitor and enables you to connect up 2 full-HD displays as well as an ethernet or multiple USB type-A devices.

The HP 13 has a built-in TrueVision HD webcam. It’s nothing special, but it does offer a nice crisp image of yourself for broadcasting online in a video chat.

(Do you video chat a lot? I wrote a buyer’s guide for the best webcams for Chromebooks if you’re interested.)

These four models of the HP Chromebook 13 will be available in retail momentarily.

If you decide to go for this line, just from glancing at the specs, I don’t think the $499 basic model is worth it, since you can get other similar laptops for that price with about the same performance.

All those that are shelling out $1,000 for a Chromebook may seem like a crazy idea right now, but with manufacturers trying to put more power into these laptops, they could be giving Apple a run for their money.

If you disregard the whole cult-like following Apple has, and just think about it in terms of performance and specs, Google Chromebooks are nipping at Apple’s heels.

Acer has also scheduled a laptop that’s jam-packed with power called the Acer 14 Chromebook for Work.

It seems like the new trend of laptops is going for the high-performance machine for a low price point.

Update: The HP 13 is now available from any major retailer for much cheaper than MSRP since it’s slightly dated. It’s an excellent steal.

Should you buy an HP Chromebook 13?

HP probably decided to introduce and manufacture this line of Chromebooks because believe it or not, Chrome OS is taking off.

When these laptops and Chrome OS first launched, they were cheap and affordable for the entry-level segment of the market.

The urge to make something that’s affordable and efficient and that could dominate the entry-laptop space was there, so the Chromebook was created.

However, they weren’t (and still aren’t) the most powerful machines and could only perform basic tasks.

PC makers started to plug-in more performance and fill that gap between power-users and casual users.

The Chromebook Pixel was created and it was one of the most advanced laptops ever made (and still is) because of its i7 Broadwell CPU and high-res screen, but it ran up to $999 and not many were willing to pay that price for a Chromebook- especially since you can get a much cheaper one at a lower price.

The argument that it’s just a laptop and the ignorance of what a Chromebook can and can’t do got in the way.

Performance wasn’t something that a lot of people were looking for. By performance, we mean spec-wise.

If you’re new to these laptops, I suggest you read up on the differences between them and a traditional Windows laptop.

A Chromebook itself is an amazing machine and it’s super-fast browsing the web and getting tasks done quickly.

However, it was never the most powerful machine.

With the HP 13, power-users, as well as casual users, can choose from a variety of different options depending on what exactly they’re looking for in a laptop.

The most expensive option is indeed impressive in performance and build. I already can’t wait to get our hands on one.

With the way these laptops are headed, they could very well give Apple and Windows a run for the market- including the high-performance spectrum. Seriously. It’s nothing to scoff at.

Update: The HP 13 has been released and it’s been very well-received. You can grab one now for under $500.