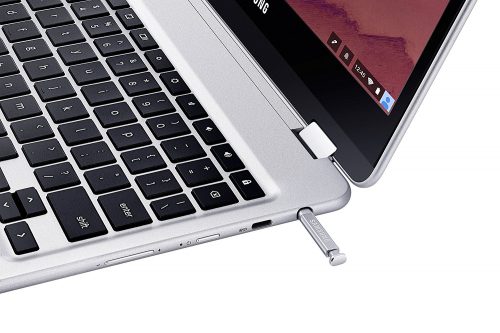 The Samsung Chromebook Plus just can’t get enough time in the spotlight.

In a  recent post I wrote, I mentioned that the Plus is the “flagship” model for Chromebooks in 2017. This applies true especially to those with convertible, touchscreen designs to better integrate with Android apps from the Google Play Store.

I just visited Google’s Chromebook landing page, and guess what? They’re headlining the Samsung Plus as “the choice” for a Chromebook.

It only makes sense.

After receiving a bunch of press at the CES 2017 convention, Samsung made headlines over other competitors, such as Acer and their line of Chromebooks.

The Plus is one of the most technologically advanced and newest Chromebooks you can buy. It has a power, speed, innovative features (for a Chromebook), and of course, Android apps can run on it.

The Plus is the real deal

Although the whole “running Android apps on a Chromebook” idea is still pretty much in beta, it still works on the Plus. As of this writing, you can already run most apps. However, they’re buggy, glitchy, and cause random errors. You’d expect more from a such an advanced laptop that’s advertised to be “the laptop” for Android apps.

But then again, the feature is in beta. Android apps have been slowly rolling out to many different models for a while now, and the Samsung Plus just happened to be the latest go-to Chromebook if you want app integration.

So, it’s kind of a weird thing. You have Google and many other news sites pushing the power and awesomeness of the Plus, yet it can only offer a sub-par experience of what it’s known best for- app support.

Besides Android apps, the Samsung Plus is a very powerful Chromebook with a whole bunch of features. For starters, it’s a convertible with an OP1 ARM-based CPU with 4GB of RAM, 32GB of storage, a touchscreen, a stylus, and a full-metal body.

(Want more specs? Get all of the tech specs here.)

Now, with Google making the Plus a headliner on their store’s page, it’ll only push it further above many other models. It’s pretty much the Windows Surface of the Chromebook world.

The Samsung Plus has had its share of success due to the collaboration between Samsung and Google. This means that Google itself is dedicated to making sure their product is a success, and Chrome OS as well. I mean, they’re basically committing themselves by proudly advertising the product they’ve put a lot of work into.

If you’re interested in the Plus, you can obviously go over to Google’s Chromebook page and see the ad for yourself. With plenty of “buy now” options available, you can grab one yourself.

There are a few other excellent Samsung Plus deals floating around right now that you can check out as well- namely from Best Buy and the Play Store.

You can read more reviews and get more information about the Samsung Plus on amazon.

Overall, this is excellent for us Chromies. To put it bluntly and straightforward: more sales = more profit for Google = more resources allocated for Chromebooks = better experience. This is pretty much the same concept for every company nowadays, though. It’s just nice that Chromebooks may finally be breaking into the market.