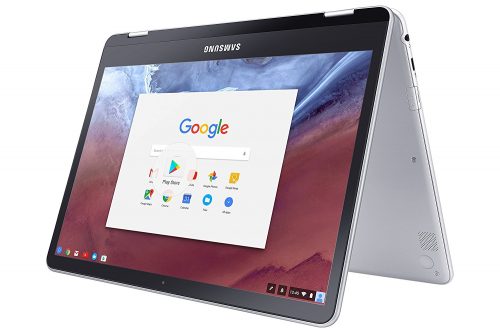 The Samsung Chromebook Plus is now available on the Google Store, with a bonus.

(NOTE: These prices are accurate at the time of this writing. Prices are subject to change without notice.)

If you’re looking to get your hands on the Samsung Plus, it’s a perfect time to grab one right now.

On launch day, the Plus sold out of units on both Newegg and Amazon. It was still available on Samsung’s store, but even then, it just goes to show the demand for it.

If you haven’t done any research on it yet, it’s pretty much the “next big thing,” as Samsung likes to dub things like their Galaxy smartphones.

The Samsung Plus also has a bigger brother- the Pro. The only main difference between the Plus and Pro is the processor. The Plus has an ARM-based CPU, which is owned and developed by Samsung. It’s dubbed the “OP1” processor and is a custom-built CPU with 6 cores. The Pro has an Intel-based CPU, so in tech specs, the Pro is more powerful.

However, the Plus isn’t really lacking anything else. It features a 12.2-inch, full-HD 2400 x 1600 resolution display, which is one of the best solutions on a Chromebook to date. It’s simply gorgeous. It’s rendered in a 3:2 aspect ratio so it doesn’t feel squashed.

It’s a convertible with a 360-degree hinge, so it can fully transform into a tablet, tent, laptop, or immersive mode (where the keyboard vanishes).

It also has 4GB of RAM and 32GB of storage which is double that of typical Chromebooks.

If you want more tech specs, you can see this article I wrote that goes over the Samsung Plus’ specs, features, price, and more.

It’s got all the right connections

What’s special about the Plus is that it’s fully touchscreen, and has a stylus pen included to use for taking notes, doodling, and capturing the screen. The stylus seems to respond accurately and it makes it easy to write accurately without you having to constantly erase or write at a weird position just to make it register what you’re trying to write.

You can see a demo of the Samsung Plus’ stylus in action here:

The convertible body of it is also fully metal, so it looks and feels very expensive (which it is). In the Chromebook world, you can grab a basic model for less than $200. The Plus will run you about $450, and the Pro will be even more expensive. The Plus is in competition with Windows mid-range laptops.

If you’re not a fan of two-in-ones, that’s the way Chromebooks seem to be headed. All Chromebooks made in 2017 will be Android app compatible, and having a foldable screen is something that many manufacturers deem to be important for Play Store app integration. You can still buy traditional laptops, but all newer models are mainly convertibles.

Plus is better than Pro for apps

Note that if you’re planning to get this for apps, the Plus has been reported to be the superior model over the Pro, even though it’s cheaper. This is because the ARM-based CPU handles the apps better compared to the Pro since those apps are made for smartphones initially and they typically have ARM CPUs.

Apparently, reviewers such as from The Verge, state the Plus runs them better and with not as many bugs.

However, the whole app integration is relatively new and so is the Plus. Most of it is still being developed and improved, so it should only improve.

It’s still a solid buy, as the Plus offers all the newest technology and has all the bells and whistles you could want. If you want one of the best and most advanced Chromebooks, the Samsung Plus is a good choice.

Want one for yourself? Get a deal.

Right now, you can get it from the Google Store with a $20 bonus credit. You can check it out here.

You can also grab it from Best Buy for $350 with any laptop trade-in.

Here’s a tip: Go to craigslist. Buy a cheap laptop. Trade it in for a Plus.

You save whatever the difference is between the laptop you buy and the instant trade-in discount.

If you’re interested, here’s the link to Best Buy.

As the Plus and Pro make more headlines, I’ll keep you updated.

Stay tuned. It’s still an awesome buy, regardless of the asking price.