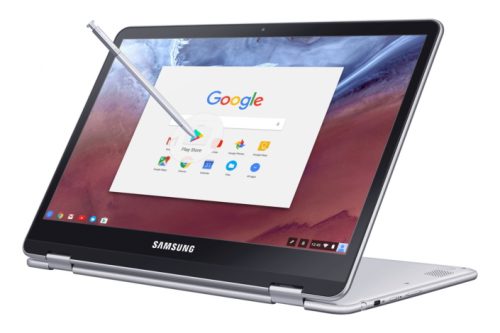 Samsung’s new Chromebook Plus is a major hit.

Online retailers Amazon and Newegg are both officially “sold out” as of this writing. They have options for notifications for when the Samsung Plus Chromebooks are back in stock, however, who knows when that’ll be. You can find estimated stock dates on their respective sites. But just the fact that they sold out is pretty impressive…especially, for a Chromebook.

But then again, it’s one of the biggest and most anticipated models. So are you even surprised?

If you haven’t heard the news, Samsung revealed two amazing Chromebooks at CES 2017 that was probably one of the biggest events at the…event. They presented their laptops with a tactful process and it easily became the popular Chromebook at the event.

I wasn’t actually at the convention, but from all the reading I’ve done online, it actually blew other brands like Acer out of the water as they received only a chunk of the attention and press that Samsung did. They hogged the stage.

The main features of the notebook are that it has a convertible, rotating 360-degree with touchscreen input and a stylus as well.

Samsung Pro or Plus? What’s the difference?

You can grab either the Pro or Plus model, with the main difference being that their CPUs are different. The Plus utilizes Samsung’s ARM-based CPU (6 cores), whereas the Pro uses an Intel Core M3. The Pro is the “premium” model and will cost you a slightly bigger dent in your wallet.

Of course, the Pro also comes with more features as well other than power.

If you’re looking for the detailed specs, you can find them here, along with more differences between the Pro and Plus versions.

Chromebooks, in general, are slowly gaining a secure market share, with their main stake in the educational field.

They’re a cheap, affordable, and easy-to-use device that self-updates and works for the majority of tasks that people do on computers.

If you don’t know much about them, you may want to see this introduction article.

If you’re in the market for a new laptop, consider getting one. With the release of these two models, it may be the perfect timing as both models are pretty much the next best thing in the Chromebook world, and also fully-loaded with the newest features.

A full-metal body with a powerful CPU, tons of power, decent RAM, and complete Android app support with all the connectivity, input, and both tablet and laptop modes will leave nothing on the table if you want the most out of a Chromebook.

The Plus is available for $449, and is considered expensive in terms of comparison pricing. But given all the tech you get with it, it’s arguably worth it if you want one of the best Chromebooks on the market (and the newest).

The Pro is still unavailable at this time, but speculators suggest that it’ll be out in March.

If you want to check out the Plus, it’s currently available on Samsung’s website for US residents only. Samsung UK and Australia don’t have it listed at the moment.

Here’s a video showing off both versions and some of their features:

Are you waiting for the Chromebook Pro?

Judging from the Plus’s release, the Pro should follow in its wake. If you’re waiting for the Pro, expect it to be sold out as well upon release.

That is unless Samsung decides to pump out more units seeing how sales were whoppin’ good for the Samsung Chromebook Pro.

I’m guessing that the people who will “go Pro” are the power-users.

Let’s see what happens. You should know by now that I’ll definitely be covering Pro sales when it comes out. If you happen to be an owner of a Plus, let us know how you like in the comments.