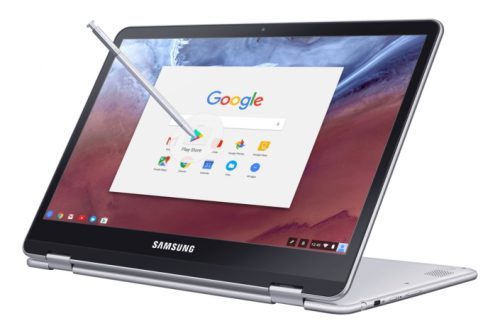 Samsung’s new Chromebooks are out of this world.

At CES, Samsung announced two new Chromebooks that offer consumers a choice between the “regular” and the “pro” version. In fact, that’s exactly what one of them is called- the Chromebook Pro. The other?

Of course, these two Chromebooks are pretty much the same device. It’s just that the Plus offers a slight upgrade over the Pro. But then again, what kind of laptop this can be considered as is a toss-up. This Chromebook is like nothing I’ve seen before.

With a chock full of cutting-edge features, it doesn’t do them justice to deliver this article in text. But I’ll try. Both models have a decent setup under the hood, with 4GB of RAM and 32GB of SSD storage. This is pretty much double the amount of RAM and storage that Chromebooks typically have. But then again, many newer Chromebooks have more powerful hardware now to accommodate a growing user base and the addition of Android apps to the mix.

Besides the specs, you get a full-fledged trackpad, which anyone can really appreciate. A bigger surface area for your fingers to swipe, pinch, and touch makes it a lot easier to navigate with ease and accuracy (and comfort). You also get a full-sized keyboard as well. Instead of the compact, minimalist keyboard that some models have, the Pro and Plus go all out and aren’t so modest.

But the crazy part? There’s a stylus that seems to come out of nowhere that works like the Note series stylus. Of course, having a stylus means tablet mode. And the laptop does just that. With a 360 degree hinge, it completely transforms into a  tablet. So it’s a two-in-one, or convertible, Chromebook. This is nothing new, but it can do it. And of course, you also get all your standard connectivity, like MicroSD and USB ports.

Oh, and it also has a gyroscope. And an accelerometer. And it weights less than 3 pounds.

It’s a hybrid of a tablet and a laptop, but it’s not exactly a convertible

So is this a convertible, or a hybrid, or both? It’s like a mix between a tablet and a Surface Pro from Microsoft. Or a mix between an Acer R13 and an iPad. It’s like a hybrid of a hybrid. It’s a hybrid squared. Since it has a stylus, that puts it towards the tablet side more.

Of course, it’s built this way to support the addition of Android apps and to make the interface nearly seamless from phone to laptop. It has the power, the software, and the hardware to run these apps smoothly, or even better than their native smartphone counterparts. A bigger screen means a better experience? Possibly.

Samsung Chromebook Pro vs. Plus – differences and pricing

So, if you’re excited, you probably want to know the difference between the Pro and Plus versions. The main difference is the CPU. The Chromebook Plus gives you the whole experience on a mobile chip and starts at $449. And the Pro? The Pro gives you a more powerful experience on an Intel chipset, which is obviously more powerful. But the price? It’s unknown for now. Personally, if you’re going all out on a Chromebook that’s going to go all out, I’d go for the Pro. Based on the many other Chromebooks with upgrade options, a CPU upgrade will only run you a bit more, and the upgrade is well worth it- especially if it’s something that makes a big difference. And the CPU most definitely is.

The most critical parts that determine performance in any computer is the CPU and RAM. This is assuming we’re excluding any gaming, and therefore graphics cards. Upgrading the CPU allows for faster task processing and things like boot, launching an app, or calculating, loading, or rendering a page, video, or other media. RAM is important for multitasking. So these two components make the most significant difference when upgrading a laptop. That’s why most Chromebooks offer the upgrade to “one up” these two vital parts.

If you’re’ going to get a Samsung, I’d say go Pro and get the “real” thing. You might as well spend a little more for a more…”awesome” experience.

Although Samsung’s Pro and Plus aren’t the only things that wooed the crowds at CES, they’re definitely something to keep your eye on. Acer also made headlines with their bulletproof Chromebook 11 N7. Asus made some sweet updates to their Chromebook Flip 2. But Samsung’s is the most innovative in the design perspective, as it’s really nothing like I’ve seen before. It’ll be the first of its kind. It’s crazy. It’s classy. It’s Samsung. It’ll be the perfect laptop for someone who can’t get enough of their phone, laptop, and their hybrid.