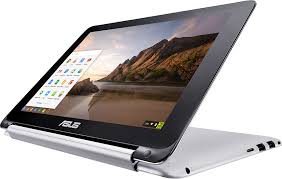 One of the most-anticipated Chromebooks was released for sale, then it went poof.

One of the first Chromebooks to ever get Android apps available on the laptop was the Asus Chromebook Flip– a powerful, convertible Chromebook. It was actually part of the original trio of laptops to ever get the Google Play update officially available for public use. It’s an excellent machine with the necessary hardware as well as touch input and a tablet mode, all of which make the Android app integration onto the Flip near seamless.

Last updated: 5/2/17. It’s finally out! It’s been released and is available for about $450 from all major retailers. Scroll down to the bottom to see a quick review of the Flip 2.

The Asus Chromebook Flip 2 has already been in the works and is near release, but it’s not quite there yet. Even though speculators already know pretty much everything there is to know about the Flip 2, they’re still puzzled by the release, or pre-release. Everything from specs to hardware to performance to pictures are already hovering and widely available online- everything but the early release. For those who are impatient, this can, of course, cause more impatience.

On the 26th of December, the Flip 2 showed up on Newegg’s website ready for sale. But then after it made news, it quickly got removed.

Then, on the 28th of December, Best Buy seemed to go through the same ritual. It was briefly available for sale only to get taken down soon after.

Of course, this made headlines for many tech media outlets as consumers and hardcore Chromies both were left on edge- what exactly is going on?

Fans are now even more excited

Either way, this is good news for the Asus Chromebook Flip 2. It stirs up some excitement and exposure to the laptop, and it shows that the demand is there. Based on the rumors going ‘round the ‘net, it seems that the release date is scheduled to be the 5th of January. Venturebeat and 9to5Google have both speculated this to be the actual date the Flip 2 becomes available for sale across consumer outlets- and will stay available for sale.

If you’ve never got a chance to play with the original Chromebook Flip, you missed out.

If you have, get excited.

Compared to the original Flip, the Flip 2 will have a much better display and larger onboard storage. The Flip 2 will also utilize a newer chipset, as they’ve evolved and more powerful chipsets are now available. The resolution is also set to a higher pixel count for a full HD experience. It also comes in an aluminum body with a backlit keyboard with a profile thickness (or thinness) of only 0.5 inches. That’s comparable to the MacBook Air.

And let’s not forget that it’s a two-in-one laptop, which means it converts from laptop to tablet in a snap. Oh snap.

Here’s a video demonstrating the original:

Here’s a quick spec sheet for the Asus Chromebook Flip 2:

Other notable features: backlit keyboard, aluminum case, convertible Chromebook, Android app support (pretty much guaranteed), HD webcam, and Bluetooth 4.0 (use it with Smart Lock and such).

It’ll retail at $499.99 based on the pre-release on Newegg and Best Buy. If you’re in the market for this, it’s pretty much a sure buy. If you’re on a budget, consider going for the original Flip, as the price should drop after this is released. Other comparable Chromebooks may also drop in price to compete, such as the Acer Chromebook R13.

As it releases and reviews start coming in, we’ll have to see how it receives. It may be the next flagship convertible. Will Asus do it again? Let’s find out.

Update: A quick review of the Flip 2

Now that’s it’s officially out, let’s go over some quick user reviews. From browsing the web, it seems like it’s a decent laptop. Some of the best features are the full-HD display that’s supposedly very bright and a powerful Core m3 CPU which offers plenty of processing power and multitasking. It’s a pretty strong Chromebook under the hood. It can handle multiple apps, tabs, and media simultaneously without a sweat. Users reported that they can multitask with no lag and it beats out competitors within the same price range.

The design of it is also pretty cool. It has an aluminum frame with a 360-degree hinge. It’s not flimsy like many other budget convertibles. But then again, you’re paying a premium price. it weighs 2.6 pounds and is only 0.6 inches thick. It’s well-equipped with two USB Type-C ports on both sides on the keyboard. You also get your basic standard stuff like audio jack, volume, microSD and such.

Note that you don’t get any Type-A USB ports. This is a stance from ASUS that they’re moving forward. Competing models in the same price range all include a Type-A port.

The display is beautiful with vivid colors and gives an awesome HD experience. According to Laptopmag, it reproduces 76% of colors on the sRGB spectrum. This means a very good color fidelity. And it’s way ahead of other competing models like the Acer R13 and Lenovo ThinkPad 13. The screen is also accurate in sensitivity to touch and works well.

The keyboard is a full-size layout with a good typing experience. Users say that the travel, feel, and accuracy of the keyboard is good. The only complaints were that the keys press too easily. This can cause feedback issues for the user.

As for audio, the speakers were said to have decent bass with crisp trebles. Well done.

Overall, it’s a good Chromebook for the price. You get a sharp screen, aluminum body, and a powerful core. The convertible mode allows to you, again, display this bad boy in 4 different modes to suit your style. It’s Android app ready and a solid performer. With only minor issues, the Flip 2 is walking the predecessor’s footprints.

You can check out the Flip 2 on amazon for more reviews.