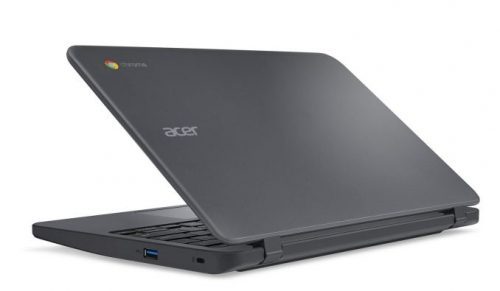 Acer’s coming out with a revamped, durable, and rugged brick of a Chromebook.

Yeah, that’s a pretty unappealing name. But what is appealing is that this model is packed with features that literally defy brute force and clumsy damage right in front of your eyes. This isn’t the first time Acer’s made a rugged and durable laptop.

In 2015, they made the Acer C910, which was a decent model equipped with features to minimize damage, such as rubberized bumpers and a rugged body. It was well-received but had a high price point. It was geared towards students, who aren’t always the most cautious with their electronics. There was also the Acer 14, which was a full-metal Chromebook with rugged design.

Apparently, this wasn’t enough. Or Acer wanted to improve on this and make an even better version.

And it’s not surprising. Acer is a leader in the world of Chromebooks. They made some of the most popular models yet, including the R13 and CB3-131.

Possibly the most durable Chromebook ever

Yesterday, at CES, Acer announced a brand new, improved model. Just like the previous model, the Chromebook 11 N7 C731 also has an ugly name, but the Chromebook itself is seriously sporting some improvements that drop some jaws. For starters, the laptop can withstand up to a whopping 132 pounds of pure brute force. For the record, a typical laptop can barely withstand over 25 pounds of force applied to the frame.

It’s also advertised to resist hinge damage and wear, as well as resist case damage too. Assuming it’ll be used by students- their target demographic, students should well appreciate it. Moving from class to class means constantly flipping the lid open and closing it, as well as dropping it on a desk or having it jump around in a closed (or open) backpack with other study materials (or pointy lab blades or pens).

Most laptops don’t have a problem with the case getting damaged in a way other than cosmetic issues, but the hinge is where laptops can wear and tear. Having a reinforced hinge may not be a bad idea, after all, seeing as how the hinge is what’s constantly being worked. A durable laptop isn’t anything new, but Acer’s promising something beyond traditional rugged laptops.

Acer states that it can even handle a drop from a full 48 inches, which is over double the height of the C910. I’m sure that’ll be something that’ll be all over YouTube- “Acer’s New Chromebook Drop Test.”

It’s got standards – military standards, that is

Of course, when you make something of this caliber, you need certifications to prove it. Acer went ahead and got US Military Standard MIL-STD 810G certifications for the Chromebook 11. This badge proves that the Chromebook went through multiple tests, including humidity, shocks, drops, vibrations, and temperatures. It even goes as far as testing weather effects such as rain, sand, and dust. But you should note that the laptop isn’t exactly waterproof, even if it can handle rain. It has the ability to drain water from the keyboard, but only up to 11 ounces via a built-in drainage gutter system. So the keyboard is spill-proof, but it’s definitely not waterproof.

Nothing was mentioned about the rest of the body though. The screen, frame, ports, and such may not be spill-proof at all. The keys that the 11 uses are also more durable and improved from the previous version. They’re more hardy and difficult to detach from the Chromebook, which may make cleaning it a pain. Then again, you can just flush it with less than 11 ounces of water, right? Besides, you shouldn’t be spilling on it intentionally.

Besides the student-proof and ruggedness of the Chromebook 11, it has a decent spec sheet as well. Some notable features include both touchscreen and non-touch versions (which makes it more budget-friendly), and a whopping 12 hour battery run to get through any student’s day- even for college students. It should also be able to run Android apps as well, which will go hand-in-hand with the classroom. It sports a modest 1366 x 768 resolution display, which isn’t full HD, but it’s “good enough” for school. It also sports a standard connectivity setup with an HDMI port, two USB 3.0 ports, and an SD card slot.

It’ll be priced at a low $230 and will be available a few weeks into January, which fits the timing for back-to-school for students everywhere. Again, it’ll have upgrade options for the screen, but the RAM seems to be locked at 4GB and the CPU is still up in the air.

Stay tuned for more updates on the reception.