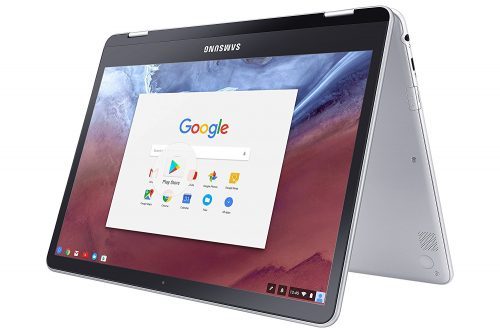 The new pair of Samsung’s new Chromebooks is pretty impressive.

If you think about Chromebooks, you don’t really think about them being anything but exotic, high-end, or luxurious. Maybe not even functionality since they have a bad rep for being useless without a WiFi connection.

(But then again, aren’t most laptops the same?)

That’s not their reputation. Not at all. It’s more like a laptop for the small niche of consumers that only some people “get.” Basic. Cheap. Simple.

They’ve never really been in the spotlight for advertising, other than word-of-mouth or those random “laptop by Google” ads you see on YouTube.

However, Samsung’s new ad for their laptops changes this train of thought. Completely.

They advertise their new laptops as something that does it all, but in a simple, elegant fashion- almost on par with Apple commercials.

You can tell they’ve spared no expensive and really went all out to push their product:

Isn’t that fancy? It portrays them almost like a super laptop that does it all and just works- for everyone and every profession.

This is by far the most extravagant ad I’ve ever seen about these laptops, and I’m honestly blown away. I can’t wrap my mind around this to consider it a good or bad thing.

It’s like I want to be taken away and think what the ad wants me to think, but then again, I know enough to know what they’re really like.

I know what they’re capable of, what they can and can’t do, and the rough road they had to travel to get to where they are now- being seen on a path parallel to Apple’s stuff. Not exactly in the same dimension, but in its own niche.

Who’s going to buy it?

Then again, who exactly is the demographic? Or the niche? Besides students and professionals, and probably hardcore Chrome OS fans, who’s going to buy (or receive) these specialized laptops?

Where else better to look than the video ad itself? After all, Samsung must’ve poured some big bucks into producing this video so they should’ve done their homework to cater to the right demographic, right?

The video shows a variety of “users,” from what appears to be college students, to business professionals, to artists, to casual users.

It shows off the features of the laptop followed by a scene of that feature in action. It also shows the laptop being used in a bunch of different scenarios so the viewer can see what it’s capable of- getting work done, presenting presentations, showing off the touchscreen input and stylus input, the Google Play integration with Android apps, laptop to tablet mode, and even some gameplay (where the game plays itself).

This seems to skew the target demographic towards people who appreciate technology, and those who want to get stuff done. On the move. This is a huge market.

If they can take over this mobile professional niche like they did for the educational market, they’ll be making some significant strides. I’m no market analyst, but it seems like Chromebooks are really making a push for professionals on the move.

But then again, a large portion of consumers simply play games, browse the ‘net, use Twitter and Facebook, check emails, watch Netflix and YouTube, and run some apps. This laptop does that as well. And does it well.

Not to mention they never slow down like Windows machines do, and are virtually virus-proof as well. Though this isn’t addressed in the video.

Samsung’s laptops are headlining the show

The Pro and Plus are one of the hottest and most-anticipated topics right now in the tech-blogosphere. Ever since their debut at CES 2017, they’ve been the subject of constant praise and speculation by major media outlets, such as Engadget and News Atlas. Some media companies even dubbed them as worthy of a place on their “Best of CES 2017” section on their sites.

This is probably due to Samsung’s extra care for these Chromebooks.

They didn’t treat these in the same manner they did with many other products. According to reports around the web, Samsung gave their Pro/Plus models a detailed introduction, stage time, and even allowed many media companies a hands-on tech demo before the conference even started at CES. They’re getting the star treatment like they’re the next Samsung Galaxy. The next “big thing.”

All this has propelled the pair of laptops into an amazing place from a sales perspective due to all the coverage and exposure they’re getting.

Can you believe that? A Chromebook. Being compared. With a Surface and iPad.

Some major big box stores such as Best Buy already have a space reserved for a demo station. It’s like the next game console. Or the next iPhone. Who’d have thought a Chromebook would be given this much attention?

Maybe it deserves it. In the Chromebook world, it is the next big thing.

With all the features packed into one laptop, it’s lacking nothing. Everything you could want is built-into this laptop. And I’m not even exaggerating.

You have everything you could possibly want. Here’s a quick spec rundown:

This is exciting news not just for Samsung, but for Chromies too.

We’re finally getting our slice of the limelight and our kind is being recognized. With our Pro and Plus flagship models leading the way, we’ll march on getting that respect. We’ve been mocked. We’ve been criticized. We’ve been the laughingstock. This could change everything and make these laptops more respected against competitors.

You can check out the Plus over on Amazon for pre-ordering information.

Surprisingly, they don’t have the Pro up yet. It may just be a single item listing with your choice of processor, as that’s pretty much the only major difference between the two models anyway.

The Plus retails for a lower price than the Pro, which will be more powerful for the real Chromebook enthusiast. For a 12.3” screen with all the specs and features you get, it’s quite a bargain compared to other similar models. The Pro/Plus gives you a lot more bang for the buck.

Stay tuned for more coverage. They’re scheduled to release on the 12th of February. Get excited.

Update: You can now purchase the Plus everywhere. Reception for it is pretty good, boasting its awesome HD display and responsive touchscreen. It even got the spotlight from Google. Play Store apps are kind of buggy though.

But then again, it’s still in beta. It’ll improve with time. Sit tight.