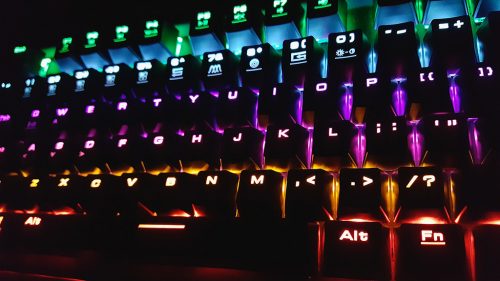 So, Chromebooks are getting a backlight indicator.

If you’re reading this, you probably don’t have a keyboard backlit Chromebook (unless you’re only in here because you have one- psychology is funny).

I can say that because the majority of Chromebooks out there don’t have a backlight. There’s a very small percentage of laptops out there that actually do have any lighting, and chances are, this update will only benefit an even smaller percentage of that already small portion.

Because people rarely change their keyboard brightness in the first place.

People set it to a setting they like, and leave it like that. Call me ignorant because I’ve never owned a desktop (or laptop) with keyboard backlighting, but I know a few people who do.

Before I started writing this post, I got in touch with each of them and asked them how often they adjust their keyboard backlight. After the initial dumbfounded look on their face, they all said pretty much “never.”

Now, I know there are some people who actually like to adjust it. Maybe you’re a gamer who lights to switch on the lights at night when you game in the dark. Or perhaps you’re a coder who needs to adjust it so you can code day and night. Or what if you’re just a guy (or gal) with a backlight on your keyboard and you just want it to look cool?

Whatever the case, the majority of people don’t have backlights on their keyboards. And that number is even smaller on Chromebooks. And of that number, an even smaller number will actually utilize this update because they never change the lighting level.

The only laptop that comes to mind right away is the original Pixel Chromebook, and probably the Pixel 2 if it- ever comes out.

Of the portion who actively change their backlight levels on a Chromebook, they probably just uptick it three times or downtick it twice. It’s probably an ingrained amount hardwired into their mind like the order of operations of day and night.

Right now, if you happen to own a Chromebook with lighting, there’s no way to tell when you’ve reached the maximum brightness or when you’re one step away from “off” without increasing or decreasing the level.

The only way to tell is to keep ticking up until you stare at your keys and they don’t get any brighter. Or keep ticking down until your lights

shut off, then tick it back up one. That’s pretty much how it is. And even though this update is pretty much neutral to me, I can see how that can get annoying and frustrating.

Well, you’ll be glad to know that the backlight level is about to get an indicator as it’s been recently discovered in a commit in the Chrome repo.

You’ll get a meter on the screen similar to the volume slider for your headphones or speakers or the brightness slider (screen brightness, that is) that maps out your exact brightness on the screen.

It’ll pop up just like any other notification in a “bubble” format. This way, you can set your backlight to exactly how you want it. No more second guessing if that’s the brightness you always set it to. No more testing if you’ve hit the maximum brightness. No more accidentally shutting off your lights.

It’s a nice feature, though few will actually benefit from it

This is a luxury feature, in my opinion, and while it won’t do anything for most, it’s still nice to have for the few. Again, I’m neutral to this update, but it does make me think that owners of older Chromebooks (like yours truly) are getting…behind.

With updates like the desktop redesign for touchscreen Chromebooks and now a backlight indicator for backlit Chromebooks, it does make you feel like you’re “left out” in a way.

Touchscreen capability isn’t anything new to Chromebooks, but the 2017 models are almost all touchscreen capable, so you could say it’s a standard for newer Chromebooks. The redesign is there to cater to these newer laptops.

Backlighting has always been a rarity in the Chromebook world. Only the fanciest ones get it, with the Chromebook not having that level of sophisticated hardware because it needs to keep the reputation of being affordable. So, therefore, the majority of models are all cheap to make to keep prices low at the checkout.

Either way, it’s nice to see Chrome OS evolve like that. When your OS evolves faster than your hardware can keep up, you know that your developers are working hard to improve their product.

Even though this update will only help a few, it could pave the way for the introduction of backlighting on more and more Chromebooks.

At least, it’s a good start if backlighting ever becomes mainstream. First-time users will be greeted with a backlight indicator so they’ll use it with ease. They’ll never have to know about the hardships that some users face right now (but that’ll change soon). Good job, Chrome.