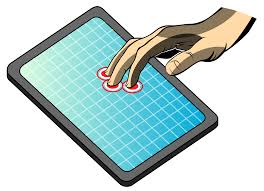 Google’s working on a brand-new redesign for Chrome OS.

Well actually, they’ve been slowly improving Chrome OS over time to better suit those who like to get touchy.

Improving Chrome OS for those who like to touch

But recently, there was a video that went somewhat viral showing off the latest changes to the code. I mean, it’s a new desktop? Isn’t that exciting?

These changes were some pretty significant ones and you can totally tell they’re made for touchscreen users.

Newer Chromebooks are all pretty much equipped with touchscreen inputs. Though not all of them are, the majority do have them. Samsung’s pair of flagship Chromebooks have really set the bar high in 2017 for how a Chromebook should look, function, and perform.

For a manufacturer to release a new laptop without a touchscreen would be suicide. They’d be shooting themselves in the foot because apparently, that’s what the market demands. Or at least is brainwashed into thinking that’s what it wants.

The video showed off a new desktop that has an app drawer similar to Android and a large search bar (you can see the video at the end of this article).

The original shelf (taskbar) is still present, but now you have another drawer for your recent or commonly used apps (or are they suggested apps?) with a convenient way to search Google right at your fingertips (literally).

If you’re using a keyboard and touchpad, it shouldn’t affect you at all other than having some redundant stuff on the screen. You can already access this stuff in the Launcher (hit the magnifying glass key or click on the Launcher icon in the bottom-left).

If you’re using a touchscreen Chromebook, you can search directly in the search box or swipe to show all your apps for quick access and convenience. You have all of it right in your face when you launch your desktop. It really doesn’t get any more faster to look something up with your fingers on Chrome OS. Props to Good Guy Google for this forward thinking (like usual).

Sure, these are all nitpicky pain points, but they all contribute to why I don’t use touchscreen laptops. Call me old-fashioned, but I’ll stick to the keyboard and touchpad.

Playing games, using certain apps, and probably rearranging icons around the screen would be ideal to use a touchscreen.

But reading, browsing, and typing articles (like this one) is better suited with a solid keyboard and touchpad combo.

Besides, learning and using hotkeys (keyboard shortcuts) are very useful and you don’t have to take your hands off the keyboard or touchpad so it doesn’t ruin your productivity flow.

Try out Chrome’s new desktop before it actually rolls out

This new desktop is currently accessible in the Canary Channel. It’s undergoing beta testing and you can access it for yourself if you want to play around with it.

Be warned though, it’s in beta. That means it’s still full of bugs and needs patching. It’s a work in progress. So don’t expect an awesome new working desktop…at least, not yet.

If you want to try it out, you can easily switch to the Canary Channel using this guide I wrote.

You should backup your stuff though because your Chromebook will automatically Powerwash itself, meaning you’ll lose all of your personal data saved locally on your device. The guide covers all that and more, so read it before you actually change your Channel.

Recently, they implemented a new “hybrid” update that basically made buttons farther apart from each other so they’re easier to push on rather than hitting two (or more) buttons at once. I’m pretty sure you know how it feels to browse a site not optimized with responsive design for smartphones and you hit the wrong button…or you have to zoom in just to make the button bigger?

Perhaps Google is redesigning the desktop for the new age of touchscreen Chromebooks?

Or perhaps the arrival of Android apps to Chromebooks?

Or possibly to acknowledge that the market is mostly students in school who are used to touchscreen devices and this will cater to them to further solidify the Chromebook’s position in schools?

Here’s the video that showed off the new desktop redesign (props to Engadget for the discovery):

Anyway, I’m glad Chrome OS is improving for its users. That’s the bottom line. You can’t please everyone. In this case, they’re helping out the majority.

Here’s an idea: Wouldn’t it be cool if it could detect whether or not your laptop has touchscreen input and then switch the UI accordingly? That’d be awesome. Then touchscreen users and keyboard and touchpad users can have a customized UI catered just for them.

I’ll keep you updated when the update pops and it rolls out. Feel free to subscribe to the email newsletter (top-right if you’re on a desktop, below this article if you’re on mobile) if you want updates.