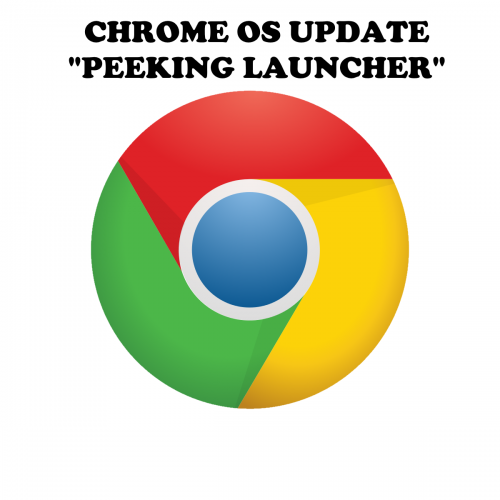 Chrome OS is getting a new “Peeking Launcher” for your apps.

With the platform becoming more and more evolved for touchscreen Chromebooks, it’s about time that the Launcher gets a rework. For those who don’t know, the Launcher is where you “launch” your apps.

(It’s the little circle icon at the bottom-left of your screen that you can access by clicking on, or press the magnifying glass key on your keyboard.)

A new app launcher and a new desktop redesign? Oh, my.

For a long time now, this feature really hasn’t changed much. You press the key, and you’re greeted with a Google search box compatible with both voice search and image upload. And you have a list of your most popular apps. That’s about it.

Recently, there’s been news that there’s an update in the works that’ll redesign the desktop just for touchscreen Chromebook. Whether you like it or not, this is the way that Chromebooks are going- convertibles, touchscreens, and voice dictation with Google Assistant etc.

It’s pretty much the new standard and the majority of 2017 Chromebooks have these features built-in to them. That’s why the software is evolving to meet the hardware’s demands.

So it’d only make sense to design an operating system catered to touchscreens, right?

First, we had the Chrome OS desktop redesign. And now we have a new way to access your apps- both catered to touchscreen devices.

Well, this new app launcher is probably part of the same initiative. The new Launcher has redesigned to accommodate touchscreen users.

Although not everyone has a Chromebook with a touchscreen, it’s certainly the way they’re going.

With Play Store apps integrating with Chromebooks and students dominating the majority of the market (they want their touchscreens), this is the way Chromebooks have evolved.

It’s been called the “Peeking Launcher,” as referenced by 9to5Google.

And you can easily demo it for yourself just by clicking on some buttons.

If you have a touchscreen laptop, you might as well try it out.I mean, it’s going to be the new replacement anyway, or at least something similar to it will (unless there’s a whole revamp of the current beta build).

I mean, it’s going to be the new replacement anyway, or at least something similar to it will (unless there’s a whole revamp of the current beta build).

Here’s how to get the Peeking Launcher:

Step 2: Click on the menu icon (top-right) and look for “About Chrome OS” and click on that.

Step 4: Switch to the Developer Channel from the Stable Channel.

Step 5: You’ll now be in the Developer Channel. You need to check for updates (repeat Steps 1-3).

Step 6: In the Chrome Browser, type “chrome://flags” in the address bar.

Step 7: In the list that shows up, look around for “Peeking” and enable it.

Step 8: The Peeking Launcher is now enabled. You’ll have to restart the browser.

To bring up the Peeking Launcher, just press the Launcher key or click the Launcher icon. You’ll notice that it looks a lot sleeker than the current one. It’s outlined with a black background and can be scrolled up and down to access all your apps.

When you’re done playing around, just repeat Steps 1-3 and revert back to the Stable Channel from the Developer Channel.

Your Chromebook will then Powerwash itself and reboot like nothing ever happened.

If you need help to get it working (or you’re just too lazy to enable it), here’s a video you can check out that demonstrates the new Chrome OS app launcher:

It’s all for the touchscreen users

Personally, I don’t use a touchscreen, so it doesn’t really do much for me other than giving me something to mess around with for the novelty (“Oh look, it’s a new Launcher”). I’ve written before about how I prefer traditional non-touchscreen laptops, so this kind of thing doesn’t really benefit me.

I do appreciate Chrome OS improving itself to accommodate the touchscreen users though. It’s constantly improving over time for the better.

And that’s pretty much all that matter in an operating system.

What do you think about the new Peeking Launcher?