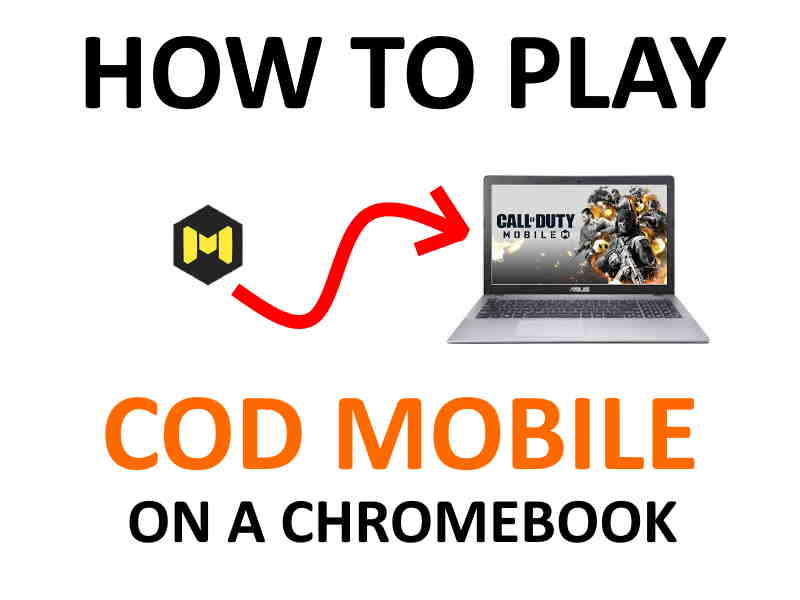 So, you wanna play Call of Duty Mobile on your Chromebook.

The good news: If your Chromebook supports the game, you should be able to play it out of the box. Just like how that Stealth Drone always gets a Bullseye.

The bad news: If it doesn’t, there’s really no way to play it right now. This would be harder than trying to dodge a Shock RC coming straight at you.

In this article, we’ll cover:

It won’t work for everyone, but if you’re a hardcore CoD fan, let’s give it try. Roll out!

Last updated: 1/3/22. CoD Mobile is now just CoD, but the method to download it is the same. However, I do suggest that you only try this if you have a beefier setup, as most Chromebooks will stutter.

The game will work with specific Chromebook models. You’ll need a powerful one for it to run smoothly.

You also can’t use a school loaned or work loaned laptop. The admin likely blocked the ability to get this working (Linux).

The most important thing is that your Chromebook has an ARM CPU, and NOT Intel, or else your game will constantly crash when you launch it.

The majority of Chromebooks on the market are all Intel-based, so only a small portion of players will be able to play the game on Chrome OS.

So there’s that. Until Activision/Tencent/Timi puts out an update that smooths out the integration, only ARM-based Chromebooks will run CoD.

To get CoD Mobile, all you’ll need are the following:

And that’s it. Your game’s performance will depend on your system specs. But that’s pretty much all you need just to play CoD.

The system requirements are there, but there’s nothing you can do other than to put the graphic settings to the lowest possible unless you’re running a beast machine.

Downloading Call of Duty Mobile on Chrome OS is as easy as landing a Predator Missile on an AFK player (or bot).

Just do these steps:

If you have an older Chromebook, you may not have the Play Store. Google is slowly rolling out the integration to all supported devices.

But there are SOME that will NEVER get the update. You can check the list of supported devices to see if your Chromebook is on there and the current status of the update.

And if it’s on the list, here’s how you can get the update without waiting.

Also, if you don’t know what model you have, here’s how to find out.

How to find out when your Chromebook was made

You can find out the exact year and month that your Chromebook was built by looking on the bottom sticker.

Make sure that you have a NEWER model to ensure that it works without hiccups. Easy peasy.

There’s a label that says “manufacture date” and you should see something like “October 2017,” for example. This is a quick way to gauge if your Chromebook should support the Play Store apps

Play Store apps are still largely a test feature (beta) and don’t work 100% of the time.

Freezing, lagging, crashing, or simply finding that the app isn’t supported on your device are common.

Some games don’t even work with Chromebook touchpads and keyboards. As time goes on, the service should improve.

All newer models (2017 and on) should have the Play Store by default.

Playing with a controller

Call of Duty Mobile works with PS4 DualShock and Xbox One controllers.

This works for the majority of people who want to use a controller to play mobile games. You’ll probably need to wait until they fully support other controllers if you have something specific you want to use.

And probably a gamepad mapper.

To link your PS4 or Xbox controller, just enable the Bluetooth on your Chromebook:

If you can’t find the option in your profile widget, try this:

Note that CoD Mobile does NOT work with the keyboard and touchpad on a Chromebook. You can’t even plug in an external USB mouse and game with it.

You have to literally click every single thing to switch between weapons, use your special ops skill, or even look around. This is why you need to use a supported controller, which is semi-supported with the game.

At this time, the game does NOT work with a Stadia controller from Google.

You can squeeze out more frames by lowering your graphic settings to the lowest possible.

By default, the game should put you on the lowest settings for each option.

But if not, go ahead and reduce everything. Your Chromebook will run best on minimal graphics as it’s a lot weaker than the modern android smartphone.

Here’s what to adjust:

There isn’t much to play around with, but these settings should give you the best performance possible on Chrome OS.

Additionally, if you can’t play because it’s too laggy, you can turn the frame rate to HIGH and see if that smooths it out.

The frame rate setting makes the game run slightly faster but at the cost of making it appear choppier.

Lower frame rates also save your Chromebook’s battery and keep it cool.

If your system can handle it, then slowly dial it up until you discover a nice balance between graphics and performance.

Some people say that even older Chromebooks can run it on higher settings without any problems!

Are you a hardcore gamer? Do you only use your Chromebook for games 99% of the time?

Check out the best cooling pads to keep your Chromebook cool.

If you adjust the settings to these and you still can’t play, your Chromebook’s hardware may not be up to par.

On higher-end models like the Samsung Pro and Plus, readers seem to be able to get some decent frames. But who’s gonna shell out a pretty penny just to play games on a machine not made for them? Probably enthusiasts.

As you know, there aren’t that many Chromebooks good for gaming.

But for everything else like video calling, editing documents, doing spreadsheets, working at home, doing homework, or just browsing the web, they’re decent.

Common problems and errors on Chromebook

Here are the most common reported issues by players when trying to run the game.

You may find some solace here if you have a similar troubleshooting issue.

This is probably the most common problem Chromebook owners have when trying to play CoD Mobile.

The game will start up, you’ll see the Activision/Tencent logo, and then it’ll either just freeze or crash.

Why? Because you’re probably using an Intel-based Chromebook. Or your device is just too weak.

The game currently only runs on ARM-based devices. So if you’re using an Intel Chromebook, you’ll see the crashing and freezing as soon as you start the game up.

If you’re sure you have an ARM CPU and you still get stuttering or the game locks up, this could be due to performance problems.

Check your graphic settings and make sure they’re set to the LOWEST possible to maximize FPS. Verify that your WiFi connection is strong.

Update Chrome OS to the latest version. If you’ve done all this and you’re still getting lag or freezing, your Chromebook’s hardware may not have enough resources to handle the game. In other words, it’s too weak.

Most entry-level, budget models only have 4GB RAM and a basic CPU with low clock rates. Sadly, this doesn’t cut it for games that are more demanding.

But then again, you’re playing a game that wasn’t made for Chromebooks THROUGH an emulator using the Play Store that’s completely different from the original design.

So what do you expect?

Until Activision gives us some love, we can’t really do much at this point.

Even if you get the game up and running, it still may not be at a playable FPS.

Being signed in to multiple accounts

This is another common problem.

When you sign in on your Chromebook to CoD, you may get an error that says you’re already signed in on another device. Try restarting the app on both devices you play on.

This should clear the error and you can then sign in from your Chromebook.

Some people reported that they’ve been banned for cheating after playing on their Chromebook. I could find no solution to this, nor any solid proof.

Perhaps Activision’s servers detected that you’re running the game through an emulator, third-party controller, and some weird setup with another account (or the same one).

Playing on the TV or external monitor

Use the external HDMI out port on your Chromebook and connect it to your TV or computer monitor for some serious CoD experiences.

Use a TN panel for that sweet 1m response time.

This is how you get a console-like gaming experience!

Note that using the TV could bring some latency issues, so don’t expect the smoothest gameplay.

You may end up trying to spray and pray with your M4 only to get sniped with a Predator Missile because you were just within range of the explosion!

Other games you can play on Chrome OS

There are quite a few other games you can play similar to CoD.

If CoD doesn’t work for you, perhaps you can get your game on with these?

Did you get CoD running on your Chromebook?

You should now be able to play CoD Mobile on your Chromebook.

Remember that the game isn’t made for Chrome OS, so you shouldn’t expect the process to be smooth at all.

However, it’s definitely possible to get your game on if you’re running an ARM-based processor.

Ain’t nobody got time for that. What is this? CS: Source?

You’ll definitely want to use a supported controller.

Perhaps in the future Tencent and Activision will make some changes and fully support Chromebooks. But for now, this is what we have if you’re just itching to get some CoD action.

Feel free to drop a comment if you have any questions.

Or if you got it working, let me know. Consider telling your squad. Then you can rule Nuketown together.