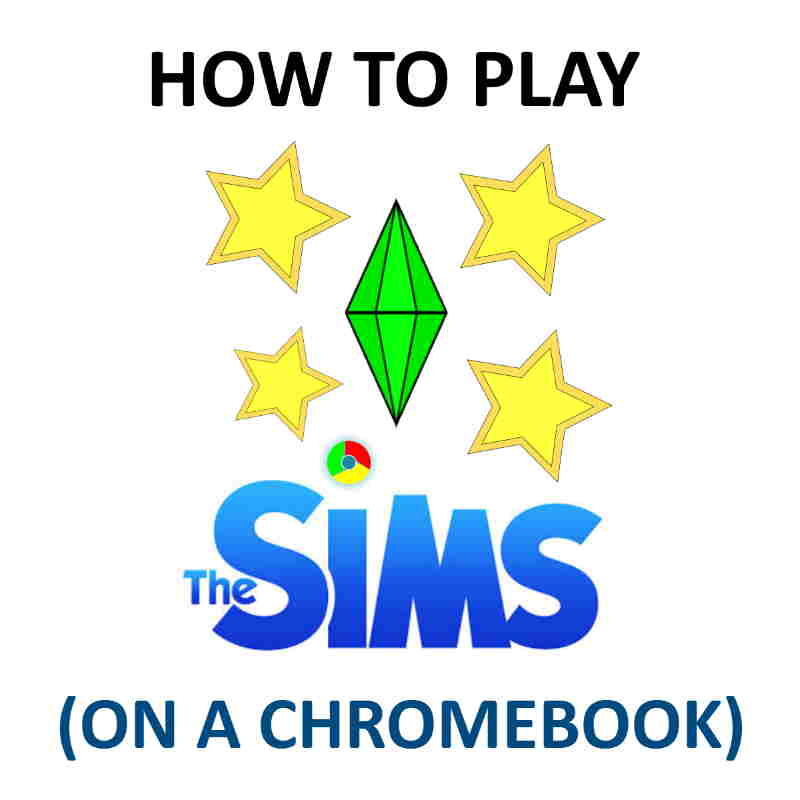 So, you want to play The Sims on your Chromebook.

Trying to max out your Boat Builder career track? Trying to hit all those aspirations? Ready to play chess all day with yourself and become a genius?

In this tutorial, we’ll cover:

Sound good? Get that plumbob and put it over your head. It’s time to take control!

Last updated: 1/3/22. The Sims 4 is still the best, but sadly, it still doesn’t have a working port for Chrome OS that’s working.

At this point, EA doesn’t have any official Sims games that are made for Chromebook.

There are two games you can try, but they’re both mobile games:

Well into 2022, these are the Sims games that work on Chromebooks (officially supported by EA).

Unfortunately, these are the only two games that’ll run on Chrome OS.

I know some of you are satisfied with Sims Mobile (with its 1.8M reviews on the App Store), so I think people will be OK with that.

(I know I’m good enough with trying to do the daily tasks paired with the seasonal tasks then dealing with STS.)

And even then, you may have some difficulty getting them to run smoothly. The way this works is that they’ll run as an “emulated” game through the Play Store.

You download the game and run it through your Chromebook, but that’s where the issues come in.

Both games suffer from performance problems (lag, slow FPS, freezing/crashing, etc.). And the controls are awkward to use.

After all, they’re made for your fingers on a smartphone.

But now you’re playing with a keyboard and touchpad- unless you’re using a touchscreen Chromebook which is better for gaming (and highly recommended).

A convertible Chromebook works even more efficiently since it’s guaranteed to have a touchscreen and tablet mode.

Personally, I used to be addicted to Sims Mobile. But after one too many Sweet Treat Challenges with Wumple’s Wishlists events running at the same time, I quit because I’m not a paying player and didn’t have time to constantly knock down that timer from doing tasks.

Players from the EA forums have been asking for support to make a Sims game compatible with Chromebooks, so the demand is there. Come on, EA.

But for now, we’ll have to stick to either of these Android versions which is what we’ll cover in this tutorial.

And if you REALLY want to get Sims 3, Sims 4, or even the original Sims, there are a few ways you may be able to play them.

But I can’t guarantee that they’ll work because I’m too lazy to try them myself. I guess I’m not a hardcore Sims fan.

You can’t play any of the more popular titles, as none of them have support for Chrome OS:

These games have already been programmed and released, so there’s practically no chance of them ever becoming available on Chromebooks.

The only way this could possibly work is if EA develops a “light” app-based version for the Play Store, which is unlikely.

But you may be able to hack your way through it by using CRD or WINE- both of which we’ll cover in a bit.

How to play The Sims FreePlay on Chromebook

You can easily get The Sims FreePlay on your Chromebook if you have access to the Play Store.

Simply do the following steps:

That’s it! If your Chromebook is eligible to get the game, you should see it appear as an app on your system.

Justclick on the game and play it exactly as how you would on a smartphone.

Don’t have the Play Store?

Not every single model will get the ability to use this feature, especially older or weaker Chromebooks.

And if you don’t know when it was made, this tutorial will tell you how to check the build date.

You may see an error that reads “Your device is not compatible with this version” or “You don’t have any devices.”

This means exactly as they sound and you likely won’t be able to get the game until your Chromebook gets the update (but only if it’s PLANNED to get it in the future). You can try to get the update now if you don’t want to wait.

If your device doesn’t appear on the supported devices list, then it’ll likely never receive it. You’ll have to upgrade to a newer Chromebook. Maybe one made for entertainment.

Do you have a school or work Chromebook?

If you’re using a borrowed device, chances are that your Chromebook is enrolled and managed by an admin team.

And you won’t be able to get Linux (because you can’t enable Dev Mode). Or they may have restricted your access to the Play Store.

There’s no way around this, so, unfortunately, you won’t be able to play.

Note: If you bought your Chromebook and it’s locked to a network, the previous owner didn’t unenroll it properly. It needs to be removed from the enrollment network first, which will usually require the owner to do so.

You can find out who’s the owner and take it from there.

How to play The Sims Mobile on Chromebook

The Sims Mobile works exactly the same way. You can download the game by launching the Play Store > searching for the game > installing it > launching it from the Launcher.

The Sims Mobile seems to be a lot more resource intensive and may have performance problems compared to FreePlay in my experience.

But that could be because I have a very old Chromebook. Your results may vary.

If you like Sims games, you may also want to check out these games (which are also available on the Play Store) similar to Sims:

Okay, so here’s an interesting solution.

Chrome Remote Desktop is software that lets you “mirror” your Windows desktop to your Chromebook.

You can remotely connect to your PC and use it from your laptop anywhere in the world, which is pretty cool.

As long as both devices are connected to the Internet with a speedy connection, it should work. That’s really the only requirement.

This means that theoretically, you SHOULD be able to play ALL the Sims games using CRD. Your PC will do all the processing and graphics rendering and will port it over directly to your Chromebook.

You can play the ever-popular Sims 4, which a lot of people want to play, right on your Chromebook through a remote desktop connection.

And it’s all free. CRD doesn’t cost anything and is just a Chrome extension you can add to your browser.

I have a complete tutorial on setting up CRD you reference if you get stuck.

But here’s a quick overview of how to do this:

This should work for any Sims game theoretically since most of them are made for Windows.

Remember to check the tutorial or post a comment below if you get stuck and I’ll help you out.

This is another possible method, but I would only suggest it if you have a beefy machine.

Basically, you’ll be playing Sims through the WINE software, which is a program for Linux specifically for running Windows-native programs. So you’re running Sims through WINE through Linux through your Chromebook.

That’s a lot of processing power. And performance will likely be sub-par. Maybe even not playable.

If you’re willing to dedicate some time (learning’s always good), and you have a powerful laptop, this method MAY work for you.

An overview of the steps:

I have no idea how the performance will be since this seems like a crazy setup.

But if anyone gets this running, let me know how it went.

Lutris is a game “library” similar to Steam in some ways.

The app lets you play Windows-based games on Linux, and all the popular Sims games are supported:

You may be able to play any of these titles through Lutris.

You’ll need to enable Developer Mode, install Ubuntu, download Lutris, and then add the game to your library.

I wrote a tutorial about getting Lutris to play Garry’s Mod you can check out. It’s for a different game, but the process is the same. You can also check out their FAQ page for more details.

Similar to WINE, playing any Sims games through Lutris and Linux will likely result in technical or performance problems.

But if you like getting your hands dirty with tech (and learning a thing or two), go ahead and try it. Let me know if it worked for you.

Besides, after you get Ubuntu on your Chromebook, you can play OTHER awesome games like:

So it’s not all a waste, right?

CrossOver is paid software that lets you run any Windows native programs on Chrome OS.

They claim that the experience is lag-free and even the most demanding programs will work on your Chromebook from their sales copy. This is pretty bold.

Regardless, if you play a lot of games, work with a lot of programs, or absolutely need to get specific Windows-based software working on Chrome OS, CrossOver may be a solution you should check out.

According to their FAQ, any program will run. So you should be able to play all the Sims games right on your Chromebook through CrossOver.

Personally, I’ve never tried their software but I thought I’d mention this since it’s one of the few companies that seem promising for cross-platform support.

Perhaps in the future, we’ll get Sims games on Chrome OS

And why not? The Sims has always been a casual game for the less hardcore gamers. And people who buy Chromebooks are exactly the demographic that I think would do well with this series.

A simple, easy, and casual game fits very well with the majority of Chromebook owners. I mean, you don’t buy one to play demanding, e-sport competitive titles.

But rather basic games to pass the time when you’re bored at school (or work).

Did you get The Sims on your Chromebook?

As of now, the most action you’re gonna get is from the mobile apps.

EA hasn’t announced any plans to support a Sims game on Chrome OS at this time.

But perhaps with the expanding Chromebook users, they’ll consider it in the future. It seems like they’re sticking to PC, Xbox, PS4, Switch, and mobile platforms.

Or if they release an online, web-based Sims (which they’ve attempted before), we just may have a “full” Sims game that works on Chromebook!

But for now, we’ll have to stick with FreePlay or Sims Mobile.

Questions? Drop a comment below and I’ll get back to you.

If you found this article helpful, let me know.