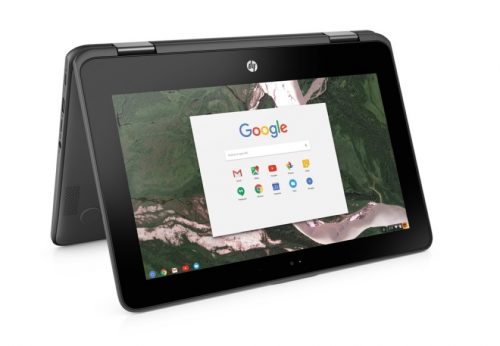 A new Chromebook by HP is in the works.

If you know anything about these laptops, you’d know they’re mainly used in schools. Chromebooks currently own a large portion of the educational market. And for good reason.

They’re cheap, easy to use, and safe. They provide all the basic functionality students to get things done, like homework, classwork, and research.

There’s no reason to mess with license keys, expensive renewals, upgrades, and updates. This is why they’ve been so successful in the classroom.

The regular consumer still sees value in them as well. They’re a cheap alternative to Windows laptops and provide decent functionality compared to traditional Windows or Mac computers.

But this article isn’t about why they’re good for students and whatnot (albeit, I do cover that as well).

This is an introduction to the device. I mean, you’re pretty much here for a preview-review. Right?

It’s called the what now?

This is about the new HP Chromebook, called the Chromebook x360 11 G1 Education Edition. How’s that for a mouthful?

The HP Chromebook x360 (let’s just call it that for simplicity’s sake) will probably have Play Store app support since it’s built with students in mind. It’s a mean and rugged, durable laptop with some additional unique features, like a stylus pen following what Samsung did for their Pro and Plus.

It’s a cheap and affordable version of professional laptops modeled with the same features and functionality. A stylus input pen is something that is now pretty much standard on all newer laptops. You can see how it can benefit students- especially in primary education.

This seems to be the new direction Chromebooks are headed as many other models provide similar features, like a convertible body with a touchscreen input.

The x360 has everything that you’d want and expect for a laptop built just for students. It’s rugged. It’s durable. It converts. It has a touchscreen. It has a pen. It’s cheap. What more could you want?

A webcam that points away from you

Besides the ability to write on the touchscreen with your fingers or a stylus, you can also record your teacher, a skit, or a presentation with the “world-facing camera.” It’s just basically another mouthful for a webcam that faces away from the laptop rather than towards the user.

This camera is made so you can record pictures and video from any direction. They’re placed near the keyboard so that when you flip it over, it faces away when you use it in tablet mode.

Oh yeah, it’s a convertible two-in-one, if you didn’t know that already. At least, that’s what most newer Chromebooks are nowadays. It’s hard to explain but you’ll get the concept when it comes out.

The stylus input is also relatively new to these devices as well.

Apparently, they look like pencils with a special eraser for omitting and rectifying mistakes that you can use just like the ones in school.

So, who would use this besides students?

If you’re not a student, it still makes for an excellent laptop to carry around with you. With a pen and a convertible body, it can prove useful for professional scenarios as well. Yo could record meetings, lectures, and more. The webcam is really one-of-a-kind and something that you can take advantage of. It’s not something you can easily find in any laptop- whether Chrome,

The webcam is really one-of-a-kind and something that you can take advantage of. It’s not something you can easily find in any laptop- whether Chrome, Windows or Mac. The tablet mode can also be used for industrial purposes, like picking a product from the backroom or taking orders in a restaurant from paying customers.

I can see this laptop being used in both professional and school environments. Just because it’s built and marketed for students doesn’t mean only students can use it. It can be used for students, professionals, and even just the casual person alike. There is no limitation.

But hey, if you’re just looking for a cheap laptop to pickup with all the newest features, this Chromebook is a steal. It’s perfect for those who don’t want to spend too much but want all the latest tech. Grab it if you want a cheap laptop.

Pricing for the HP x360 is yet to be revealed, and same with the specs. Stick around and I’ll keep you updated when it rolls out.