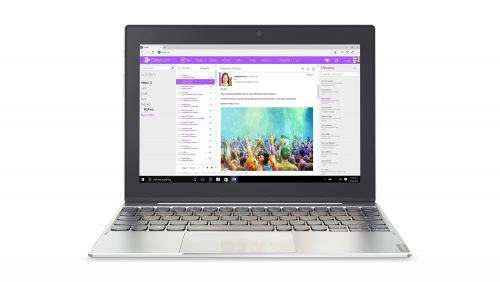 It’s a direct competitor to the Chromebook- announcing the Lenovo Miix 320.

It’s a cheap, $199 laptop running Windows OS that’s made to compete with Chromebooks for the “cheap and affordable laptop” market share.

Before the Miix, there was the HP Stream. It’s a decent laptop but it’s seriously underpowered. It had trouble even updating to Windows 10 on its own platform from Windows 8.

But now, will the Miix be a fierce competitor? Will it bring the heat?

Now, the Miix by Lenovo is here. It has a few things going for it that make it better than the HP Stream.

For starters, the Miix is a detachable laptop, which means you can pull the screen off of the keyboard and use it as a tablet if you want. This is useful if you want to shift between the two modes as you wish, and you can get that extra portability of having a tablet to carry around with the bulky keyboard and the added weight of it.

This is something that Chromebook can’t do as of now, but there has been a recent discovery stating something along the lines of a “detachable UI” in the works over at The Verge.

It works just like a Windows Surface computer with a magnetic connector between the screen and keyboard. When you place the keyboard next to the display, it’ll snap into place perfectly every time. This looks very expensive, but the Miix proves it’s cheap technology that can be very affordable for the typical user.

So, we have a full copy of Windows 10, a detachable keyboard, a very affordable price, a better resolution (though a slightly smaller screen), and a light and portable frame compared to Chromebooks so far.

From people who’ve tried the Miix already, they gave it positive reviews and praised it for the utility of it. I guess that just being able to detach the keyboard from the laptop is a big thing.

PC World says that the Microsoft Precision Trackpad recognizes “additional touching” and it also has swiping gestures just like a Chromebook does.

Here’s where I think the Miix may fall flat on its face:

The spec sheet isn’t all that impressive.

The performance of the Miix 320 is very…average.

It features an Intel Atom X5, which is a very dated processor. Although there are newer versions of it, they’re still not quite as robust as the newer Intel Celeron CPUs (or even i3, i5, and i7s). It can only handle simple tasks like surfing the ‘net and doing some basic productivity tasks- spreadsheets, presentations, and documents. You can also watch videos, view images, and play light games.

Although this is comparable to a basic Intel Celeron-powered Chromebook, it’s still not quite up to par in performance. I’m assuming the overall processing will be slower, given that’s it’s also Windows 10 instead of Chrome OS running. Windows 10 is a lot more resource intensive and a resource hog.

Something impressive is that it has 4GB of RAM. You can multitask with it and it’s double the 2GB you typically get with a cheap Chromebook. You also get 128GB of SSD storage to save your stuff, which is a lot more space than your typical Chromebook offering a mere 16GB.

But don’t forget, Windows 10 takes up to 20GB of your space.

As for connectivity, the Miix 320 has a USB-C port and two USB-A port. Both pieces (the keyboard and screen) have USB ports, so you’ll always be “connected.”

It also has your standard 802.11ac WiFi connectivity for faster speeds and even LTE support for your mobile network. It’s basically a laptop with a cellular connection like your smartphone. It’s not free of course.

This just brings back the HP Stream again. It was a weak machine that couldn’t do its tasks well without some performance issues.

Now, the Miix 320 may also suffer from the same problem with that processor. It needs more power.

How does the Miix mix in versus Chromebooks?

As of now, the Miix looks decent, but I think it’s way underpowered due to the heavy OS.

What good is a sub $200 laptop if it’s slow, can’t do much, and only offers basic functionality? You can get a Chromebook for the same price and do a lot more. Pair that with thousands of apps from the Play Store and Chrome Web Store and you can customize it to do whatever you want.

If the goal of the Miix is to take the market share, we’ll have to see how the market reacts. I can only see very budget-limited consumers buying the Miix, or elementary students in school. Chromebooks already dominate the school arena, but the Miix may prove otherwise.

It’s a step up with its design, but its basic under-the-hood CPU may be a limiting factor and bottleneck the whole thing. If it had a Celeron, that’d be much better. But then again, it’d raise the price and make it that much more difficult to compete in a crowded market.

I’ll have to see how the Miix stacks up. I’ll be grabbing one for review when it launches. Sit tight if you want a review.