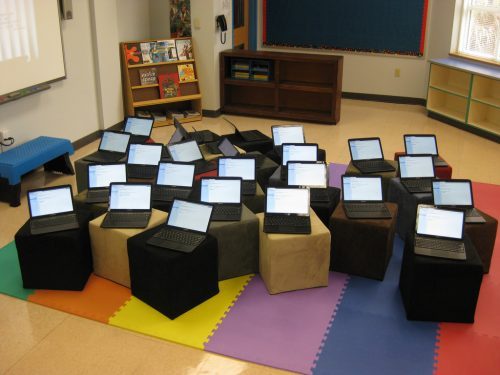 Specifically, what happened with the back-to-school sales. They got crushed.

Even though Apple was proud that their iPhone 7 sales beat the Note 7, they aren’t too happy about their Macs over Chromebooks. Probably.

Why the change? It seems that consumers are opting-in for cheaper laptops with the bare basics, rather than a full-fledged laptop with “all the things.”

Chromebooks being multitudes cheaper than Macs, gained sales over the popular MacBook Pro and Air line. The PC market is currently in a slump, and with Windows and Apple fighting over desktops and laptops offering everything you could want in a computer, Chromebooks are winning the budget market with a simple machine that can do all the essentials- offering many benefits versus Windows and Mac.

In the computer world, Macs are usually more expensive than PCs- offering a premium experience.

Even though purely based on specs, Macs are usually less powerful and more expensive compared to Windows. However, it seems that Apple users don’t mind paying more for the Apple experience. Why? I don’t know. Must be the operating system. However, when you add Chromebooks into the mix, you get a stripped-down, fast, and simple system that dominates the price wars. Schools, students, and even regular consumers are the target demographics for Chromebooks, as many schools have made the switch to Chromebooks and resulted in Chromebooks dominating the educational market.

Why are consumers turning to Chromebooks

Chromebooks appeal to consumers because of their simplicity, yet the ability to perform essential tasks like type documents, work on spreadsheets, make slideshows, browse the Internet, watching videos, and of course, play games.

But the biggest reason?

They’re cheap and affordable because they have no licensing fees for Chrome OS. This keeps overhead costs low and thus makes it a lot more affordable for the end user (you).

These little laptops are competing for the budget entry-level laptop market against Windows. Although Windows has a few laptops that compete on price point, they don’t work too well. A notable competitor is the HP Stream.

To manufacture this laptop, HP must pay a licensing fee to use Windows 10 as the operating system. This just adds to the total cost of goods. Then they have to whip together a laptop- with all the hardware, labor, packaging, shipping, and all the other misc melleous costs involved. After all that, it sits on a shelf at your local electronics retailer to compete with other similarly priced laptops.

That’s normal for any computer manufacturer.

The issue is when your own laptop is so underpowered that it can’t even handle its own operating system. Reviews around the web have stated that the initial version of the HP Stream lags often and slows down with major performance issues. This is likely due to the hardware being way too weak.

Why? Because to create an affordable laptop that can compete, you need cheaper parts. When you have cheaper parts, performance suffers. And add the licensing fee of Windows on top and you need even cheaper parts to be competitive.

Since then, the HP Stream has improved exceedingly, so the performance isn’t as bad.

No charge for Chrome OS

Thankfully, Chrome OS is open source software. This is why manufactures can afford to pump out these little laptops while keeping costs low and performance doesn’t suffer. Chrome OS itself isn’t too resource intensive either. It’s relatively lightweight. So that only helps.

There are tons of apps available on the Chrome web store, and according to the Chrome blog, the Play Store will be coming over on much more Chromebooks to unlock even more potential, it’s like a laptop that acts as a smartphone. You can basically customize your Chromebook to do whatever you want. Chromebooks are highly cloud-based machines. You do most of your work online. Although, you can still do plenty of things on a Chromebook offline.

(Want to know if a Chromebook will get the Play store update? Check out this list for a particular model.)

Here’s a video of student’s review:

What will Apple do?

Apple has tried to get into the classroom by preparing tablets such as the iPad Pro, but sadly, hasn’t updated the tablet in a while.

The market is a competitive space. Apple and Google aren’t the only ones, as Microsoft also has a huge share of the market due to their Windows omnipresence.

But, Chromebooks are dominating regardless pretty much because they offer a product that fit the needs of kids and students perfectly- a laptop that does everything a kid or student could want…without the high overblown price tag.

Chromebooks currently dominate schools and classrooms. If Apple wants to get in, perhaps consider making a minimalist laptop? You have the software and reputation, now just make it more accessible.

Update: There’s a follow-up to this story that compares the sales between MacBooks, Windows, and Chromebooks all over the world. In essence, we see a decline in Mac products and a rise in Chrome products. This is striking behavior how the rest of the world can be emulated just by the United States as a small sample.