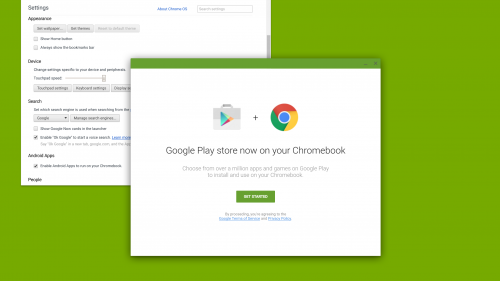 Before, this was merely a rumor with some speculation.

There was some commotion going on over at reddit about some group of (good) hackers finding code that basically stated the Google Play store would be coming to Chromebooks.

I wrote about this in another article stating how the Play store and your favorite Android apps are coming to Chromebooks, and even when I was writing it, I still didn’t really believe it until I saw it officially announced from the big G themselves.

Now, Google has officially announced it on their Chrome Blog.

I think there are 3 main groups of people that would be affected by this news- and in 3 distinct ways. Let’s go over them quickly.

If you’re in this group, you love your Chromebook.

From the fast boot to the super fast browsing, you’re all for Chromebooks.

You like the apps, but you want something more from your Chromebook.

Think about your favorite apps you use on your smartphone or tablet.

Now, they’ll be on your laptop with possible keyboard, mouse, and touch integration. All your regular Chrome web store apps are still there, but now, you have the addition of millions of apps via the Google Play Store.

If you’re in this group, you may not be as excited to hear about Google’s announcement.

You like your Chromebook, and you get along fine with the apps from the Chrome web store.

However, now with Google Play coming to your Chromebook, you find the extra convenience you get a nice and pleasant experience.

Instead of having to use your phone to make a Skype call, you can now simply do it from your Chromebook. With Google Play coming to your Chromebook, you can get all the Android apps you usually use on your Chromebook. You find this added convenience very nice and something that should be expected.

Chromebook Group 3: The Whatever User

If you’re in this group, you don’t really care for whether or not the Chromebook gets Play store apps.

You just bought a Chromebook because it was cheap, or you just needed a quick laptop in a snap.

Android apps not on Chromebook.

I just made up these groups for fun, and in no way do they really represent any segregation of Chromebook users. I was just so excited that I felt like doing something totally random and fun.

Regardless, Android apps on Chromebooks isn’t a joke.

You’re probably wondering at this point why all Chromebooks don’t get the Google Play update. It’s because this update will roll out starting with a few models.

Google rolls out the Play store on 3 “beta” Chromebooks

Google has announced the first 3 Chromebooks to receive the Google Play store are the following models:

These 3 Chromebooks will be the first “beta” laptops to try out Google Play on Chromebooks.

When? Which one? What about my Chromebook?

The Google Play store will roll-out in next month for these 3 Chromebook models simultaneously.

Now, you’re probably asking “when will my Chromebook get the Google Play apps?”

Google plans to roll out the updates to other Chromebooks gradually.

My Chromebook isn’t on the list of those Chromebooks either, so mine will have to wait, like many of you.

There is no exact date for when we’ll get the Play Store on our Chromebooks, so we’ll just have to wait and see. Maybe Google will release more updates on the Chrome Blog regarding the rest of the Chromebooks.

Update: You can check if your Chromebook is compatible with Google Play here.

Before you get excited over the update. Just use the list below. Note that this list isn’t complete as stated by Google.

Will my Chromebook get Google Play?

There’s a list of Chromebook models and manufacturers that you need to check to make sure Google Play will be compatible for your Chromebook.

For your convenience, this is the list from Google’s Support KB:

If you don’t see your Chromebook model on the list, it may be added later, as Google states they’re updating the list constantly. It mainly has to do with the CPU architecture and system compatibility.

It’s already known that some models of Chromebooks won’t be able to run Google Play, however, a lot of this information is still in the air.

There hasn’t been any official word from Google yet.

Either way, this news has me ecstatic.

Finally being able to use Android apps on Chromebook is an amazing feat that should’ve been done a while ago.

Chrome OS and Chromebooks, in general, have come a long way. From the first full-screen Chrome browser with no offline compatibility all the way to a blazing-fast laptop with file management, offline apps, and even a desktop (although it’s a static image). I’m sure Chrome OS will improve.

Chromebooks gaining respect in the market

Chromebooks aren’t really the joke they used to be anymore.

They’re now used in educational systems across the United States, rapidly replacing Mac and Windows. They’ve also recently surpassed Macbooks in sales.
With the cheap pricing, efficient computing, and an improving service to get users more out of their Chromebooks- it’s easy to see why their popularity has increased so rapidly and is quickly becoming a respected OS.

Anyway, with Google Play coming to Chromebooks and the ability to use Android apps on Chromebooks, that’ll just add fuel to that growing fire. Chrome OS is already replacing Windows and Macs everywhere.

Of course, there will be some issues that need dealing with.

However, Google has stated that the Android apps should work nicely on a Chromebook and almost be seamless. How this will be done, I’m not sure. Will there be alternative apps with a different interface? Or will it just be the same UI but you click instead of touch? Lots and lots of questions, yet, I can only find so little answers online. And most of them are very vague and rumored.

The news about Android apps on Chromebooks coming from Google’s Blog and Google I/O is enough to satisfy my hunger. And I’m sure many of you feel the same way. Knowing that Chromebooks have a large following should make a lot of users- whether they’re a casual user, poweruser, or developer get excited for the Play store coming to Chromebooks.

Ready to Skype, play Minecraft, and swipe right on your Chromebook? I know I am. I’ve been ready.