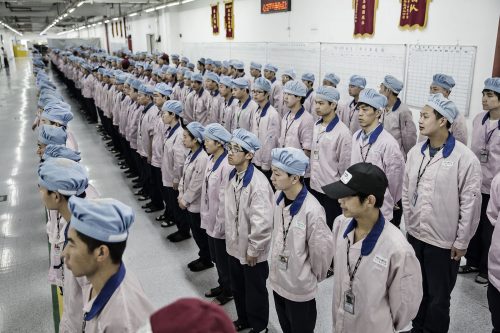 Do you want a job at Apple’s iPhone factory in China?

If Apple offered you a job at its iPhone factory to help make one of the most iconic devices and change the world, would you take it?

What if they said you can lay your eyes and hands on the product before the rest of the world, would you take it?

What if they said you would work directly in the factory and handcraft these devices?

Can you guess how much Apple pays their workers in the iPhone factory to make their most popular and profitable product- the iPhone?

You probably wouldn’t want to take the job if you were offered it.

You probably can’t afford to make a living with it.

The Pegatron iPhone factory- where iPhones are made

That’s right. The factory where the world’s most profitable smartphones are made is located at the Pegatron Corporation factory in Shanghai, China.

The Pegatron factory in China is one of Apple’s closely guarded and inspected facilities of their supply chain. After all, this is literally where the iPhones are put together and assembled. You can expect tedious quality control over the premium smartphone device. It’s tightly sealed and protected, as it’s a major part of Apple’s cash cow.

Not much has been said about the housing conditions of the iPhone factory, nor the working conditions and labor laws of the factory.

With Apple being such a company of its own class,  you’d expect the workers to be treated fairly and paid above average, right? Apple is a dominating leader in the electronics and computing space. A world leader. But, their iPhone factory is well-protected so it’s hard to expose anything, assuming there is something to being exposed. After all, it’s almost like intellectual property. Apple has to safeguard their products and workflow.

They’re a giant, but they don’t need any more competition.

However, the wage of iPhone factory workers was recently studied and examined in a few online publications. And the results may surprise you.

Bloomberg went ahead and wrote and article based on various findings to try to put together a working sum of iPhone factory workers’ wages, and if they were paid higher (or lower) than we expected.

Being in the United States, it’s something that we don’t think about and almost take for granted.

But over there, it’s actually pretty decent.

Here’s some food for thought about overseas factory workers for a giant company that dominates the US phone market.

Workers at the Pegatron iPhone factory in Shanghai, China make a working wage of…

How much do Apple iPhone factory workers make?

Let’s get the figures already.

If you were to work at the Pegatron iPhone factory, you’d be bringing home a whopping $650 to $850.

Is that worth it in the United States? Probably not. At least not in many states.

But I’ll admit that it’s enough to have a comfortable living in a few various states.

How about in China? It’s decent. But like us, they have their own expenses to pay for.

These figures come from Bloomberg and was investigated pretty thoroughly in my opinion.

For example, if you worked for Apple and you wanted to buy an iPhone that you may have just put together, it would take you a whole month’s salary to afford it- without the employee discount, of course.

But then again, a lot of workers in the United States would have to spend quite a bit of money to save up for the newest iPhone. These workers aren’t too different from Americans.

Workers for Apple need to spend their entire month’s salary.

Should you be surprised? Not really, considering that the world’s leading brands make their stuff in China in the same way.

iPhone assembly workers make much less than minimum wage if you compare it to the minimum wage in California. But they can still make it happen.

Is this good income in China? Not really. It’s barely making ends meet.

You’d expect a multi-billion dollar company to possibly pay their workers well. But, that’s not the case, as with many other major retailer giants here in the United States do the same thing. They’re treated pretty much the same way.

It seems that it’s all about the money. Not the people.

Why are iPhones made in Chinese factories?

Let’s face it. Labor is cheap in China.

With cheap labor comes cheaper costs. Cheaper costs mean a cheaper product after it’s imported and hits our shelves. If the iPhone were made in the United States, you can expect double to triple the price, based on other comparable products.

It’s all part of Apple’s strategy to keep prices reasonable. And pretty much every other large retailer in the US. It’s a common strategy to use overseas labor or to import goods from China. The majority of products found in big box retailers like Target, Walmart, Best Buy, and pretty much all your favorite stores and brands do the same thing. I’m pretty sure this is common sense and every consumer knows this already.

But that’s not to say that they don’t make a huge profit from each unit sold. iPhones are incredibly profitable and I’m sure Apple has huge margins on each iPhone.

How much is an iPhone in China? Can you afford one?

The iPhone is Apple’s best offering and one of their most profitable products they make.

The base price in China is about $807. The same iPhone retails for $649 in the United States. Luxury devices such as the iPhone are indeed a luxury in China.

Whereas here in the States, it’s pretty much omnipresent and literally just another smartphone.

Don’t get me wrong. The iPhone is an expensive device and many Americans can’t afford one, let alone the newest one. Apple counters this by offering an installment plan. Android phones, which are flagshipped by Samsung, does the same thing by offering cheaper budget phones. They’re not the popular models, but rather slimmed down and cheaper phones that are much more affordable.

Bloomberg’s article also mentions that a group states the pay is too low at Pegatron. Many workers need to work long hours and overtime just to put food on the table, let alone buy an iPhone. Pegatron and Apple have been said to eliminate any excess work due to the extreme need for cash. You can imagine workers there are nothing but hard-working, and many of them do it just to get by.

Maybe if Trump gets elected, he’ll get Apple to “make their damn computers” in the United States.

No one really knows the labor conditions to be exact at the Pegatron iPhone factory. Sources, such as Huffington Post, have tried to get Apple to comment on how the work is at Pegatron, but Apple has declined to comment.

I wonder why. If it was something to be proud of, it’d be more publicity for Apple. It’s most likely the opposite. They were put on the spot.

So, the next time you whip out your iPhone, or plan to buy the iPhone 7 based off of the rumors, recognize that a lot of work has been put into it- from sourcing the materials (which often indirectly includes some sort of child labor overseas), to assembling the device (by workers who can barely it themselves), and then packaging it up to make it look pretty.

Stamp it with a QC sticker and an Apple logo.

And then finally sell it at the store to those hardcore fans lining up.

“Congratulations on your new purchase.”

The point of this post isn’t to single out Apple. The majority of companies in the US do similar practices. It mainly to bring attention to what actually goes in to making the world’s most popular smartphone device. It’s just that Apple was chosen due to the recent Bloomberg investigation (sorry, Apple). But this should give you a sense of where some of your favorite products actually originate from.

What do you think? Are their workers paid fairly? Or do you think they deserve more? Or less?

1 thought on “How Much Do Apple iPhone Factory Workers Make? (Take a Wild Guess.)”