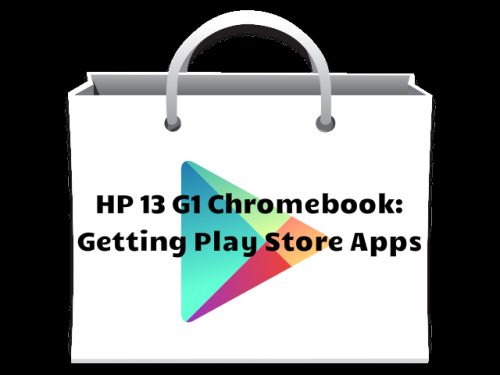 If you’re an owner of an HP 13 G1 Chromebook, you can play around with Android apps now. Like, right now.

Of course, this whole process is still in beta. But you can access Android apps easier than ever now.

With a few clicks, you’re done.

Before, you had to do some major legwork just to mess around with getting these apps on your HP 13.

Now, you can easily just switch to the Beta Channel and they’ll be right in front of you to download.

You don’t have to do nearly as much work as before.

This means no CrOSH lines. Woot. (Especially if you’re not familiar with code- like me.)

Getting apps on the HP 13 easily

Warning: Be sure to backup all your local data before doing this. This means your images, videos, and other media in your Downloads folder and any other custom files you’ve created. Stuff in your Google Account or Drive will be safe from this change. Just backup your local stuff to an external hard drive or another storage device. You can also transfer it to your Drive account or other cloud-based services (like DropBox).

Step 1: Go to Settings. You can open your web browser and click on the menu icon (in the top-right corner with the three dots). Find the Settings tab and click on it.

Step 4: (Are you sweating yet?) Click on “Select Beta Channel.”

No legwork. No hoops. No nothing.

Now, your Chromebook will begin automatically downloading the newest version of Chrome OS, which includes the Play Store for Android apps. The HP 13 is one of the newer models to join the list of models that can run these apps.

If it doesn’t appear to be doing its thing, go ahead and look for the “check for and apply updates” button and click on it. This will force it to fetch the beta version and start downloading it.

You’re now free to move about the Play Store

After it resets, you’ll be greeted with access to the Play Store. You’re free to install whatever Android apps you fancy and interact with them as you please.

You can try downloading some games like Temple Run 2 or Subway Surfers. Or how about trying out your favorite productivity apps on a bigger screen? Or how ’bout

Or how about trying out your favorite productivity apps on a bigger screen?

Or how ’bout try running the Pocket Edition of Minecraft? You can pretty much try out any compatible app and experiment with it.

Before this trick, you had to jump through many more hoops with the possibility of screwing up your laptop and having to Powerwash it over and over to fix it.

Now, you can play around with just a few clicks of your mouse (or touches on your touchpad).

But now, you can play around with just a few clicks of your mouse (or touches on your touchpad).

Update: Even as of the latest update, there are still lots of Chromebooks that don’t have access to the Play Store yet. If you own an HP 13, you can get the Play Store before a lot of other users. Take advantage of it.

Reverting back when you’re done playing around

When you’re done and had enough for the day (or week), you can switch back to the Stable Channel (which is the default one). When you do this, your local data will be deleted so make sure you back it up.

Your laptop will automatically perform a Powerwash which will basically restore everything back to factory settings. All your cloud data stored in your Google Account is safe.Just the stuff saved on your local disk will be erased.

Just the stuff saved on your local disk will be erased.

This includes all the media in your local folders and “Downloads” folder as well.

That’s it. You’re now back in the default environment (Stable Channel) of Chrome OS. You can now transfer your stuff back into your laptop’s local storage if you please.

Wasn’t that easy? I don’t think it can get any easier than that.

While getting Android apps on a Chromebook is absolutely nothing new, it’s still nice to see that more and more models are getting the update. If you have an old or underpowered Chromebook, you’ll be on the waitlist for a while (like me), or you may not even get the update. You can check here to see which models are scheduled for the update, and an approximate timeframe as well.

Either way, remember it’s in beta. It’s still a work in progress. It’s not going to run smoothly the first time you use it.

Even for flagship models such as the Samsung Plus, there were still many bugs and issues while running apps. Google is clearly working on it to improve the platform, but it’ll take time.

When you’re integration a platform that’s built for touchscreen smartphones with specific hardware onto a bigger screen that may not have the same input and hardware, issues arise.

While the kinks get worked out, we can keep playing around with the platform and just “ooh” and “ahh” about what it could be.

When it finally gets everything fixed and patched, Chromebooks will be an omni-purpose laptop.

It’ll have a combo of the Chrome Web Store along with the Play Store. Think of the possibilities.

You can customize your Chromebook to do anything you want- entertainment, games, movies, web-browsing, productivity, developing and countless other uses. You pick the apps. You create your Chromebook. It’s your call.

What do you think?

Scroll back to top wpDiscuz