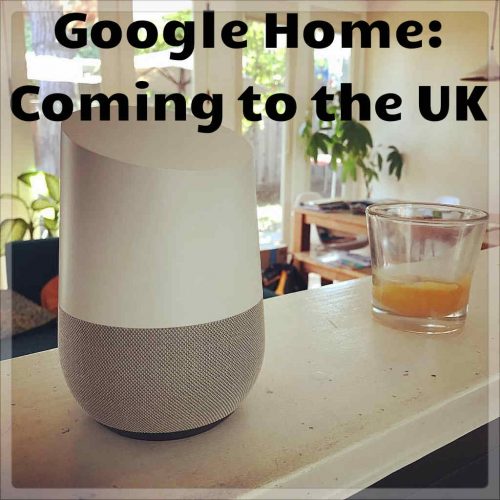 For our readers in the UK, you may be glad to hear that the Google Home is coming…home.

If you’ve been waiting to get some Google goodies in your hands, you’ll be glad to hear that Google Home will be available to UK residents on April 6th. If you haven’t heard of Google Home before, it’s basically a voice-powered virtual assistant.

I’ll spare you the details, but in a nutshell, here are some of the things you do can do with it:

These are the basics of what it can do, but I think you get the idea- it’s basically Google in a box along with some additional features when connected to your other devices. It’s pretty cool in my unprofessional opinion, as I’ve only had limited experience with them. It’s always being updated with more features and improvements, and Google uses that as one of their selling points on their feature page:

“Google Home is compatible with many products and services you already love — and more are being added all the time.”

Not to brag too much about it, but the things it can do are pretty impressive. You can make it your control center for information and media without having to use different devices. It strives to be your all-in-one smart virtual assistant.

Pricing, customization, and where to get one

Now, let’s go over some more details such as price and where to buy one.

On release day, it’ll be available from Google’s Store and major retailers in the UK. To name a few, you can grab a unit for yourself from the following:

It’ll probably start out with these retailers and move out to others later, as many other Google products (and pretty much any major player in general) does. Seeing that it’ll be available for UK residents, you’ll be able to find it on any online marketplace as well with time. Sites like eBay or local classifieds will offer the item as secondhand (or new) after it’s been out for a while.

Some good things about the Pro compared to Amazon’s Echo is that it’s cheaper, easier to use, and has wide IoT support. A bad thing is that some features that are available for US users aren’t available for UK users.

It’ll be priced at an even £129, which is a reasonable price. It’s a tad higher than the US version, but it’s probably due to the logistics of having to send it internationally. If you purchase one now, the shipping alone makes it roughly the same price as buying it from the Google Store. Shipping will also be free from their store.

Google Home also offers many different colors of bases (the bottom portion of the device) that you can customize to your liking. You can choose from colors like blue, orange, purple, silver, black, or even mango. It goes even further and allows you choose your material for your base- metal or fabric (with a reasonable additional charge for either custom base). This offers a plethora of options so you can make yours unique. No more going over to your friend’s house and seeing an identical Google Home. First world problems. Solved.

Along with Home, Google will also be releasing Google Wifi on the same day.

This is basically Google’s version of a router. It’s made to cover your home without interruption and easy to setup. It integrates with your current connection and offers some additional features like connecting your phone to it so you can check out all the available connections, run a speed test, or set up a guest connection. It’s advertised to provide a reliable and fast connection.

Pair that with Google Home and you just Googled your house. (Sorry.)

Either way, if you’re in the United Kingdom and you’re ready and waiting for some “Made by Google” in your house, join the waitlist.

I’ll be writing another article when it releases to talk about reception in the UK. Stay tuned.

Update: Google Home has now been released for the UK. You can buy one from Google’s Store or any other approved retailer.

Reception has been quite positive. Reviewers from ExpertReviews wrote that it’s like “…having a little digital butler in my home…” and that its “…main purpose isn’t in driving e-commerce or purchasing goods…” and also “…Google Home is an essential purchase.” They state that there are a “handful of teething problems” as well. But overall, it has rated well.