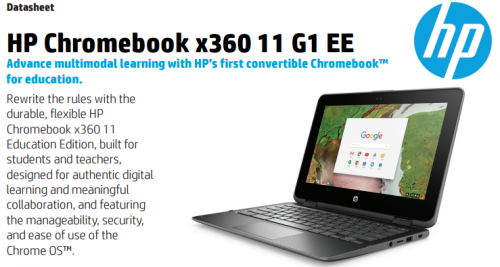 The next big Chromebook for students, the HP x360 Chromebook, has released its spec sheet to the public. And it’s pretty freakin’ awesome for a laptop.

I wrote about the HP x360 11 G1 recently, but I didn’t include any details regarding the price or specs of the device. I figured it’d be moderately powerful, considering that it’s being built for students.

Now, with the full spec sheet available online, I just saw how much of a powerhouse this thing actually is. In fact, it competes with the Samsung Pro on a relative level…and let’s not forget, this laptop is built for just students in mind. It has way more power than any kid would need.

That’s the main part that makes this whole thing awesome. Seriously. It’s got some kick.

Why would a student need that much power in a laptop?

For starters, this is a new convertible Chromebook with an 11.6’’ touchscreen. The HP x360’s CPU is an Intel Celeron processor based on the Apollo Lake chipset. This is pretty new to the Chromebook world, but there are a few other models that don’t go with the typical Intel-based setup. You have Samsung laptops which use their own proprietary ARM-based chipsets (for some models), and you have the Acer R13 which uses a MediaTek chipset.

The Apollo Lake chipset is just another CPU architecture built by Intel, but it’s not that common in the laptop market, at least from a typical consumer’s perspective (like me). In fact, it was the first time I’ve heard about it and I had to do a little research to look it up. It’s pretty decent. Nothing that special to write about. It was actually a quiet launch by Intel, which is probably why no one has heard about it unless they did research on it.

The HP x360 Chromebook 11 G1 will also have very, very nice RAM options. You get a basic 4GB of RAM (big whoop). But you get the option to upgrade it to a whopping 8GB of RAM. That makes it one of the models with the most RAM you can get on the market. That’s an asinine amount for any junior high student. Professionals can use this device and fully take advantage of it. It’d be a shame to make this laptop as built just for students and not having a whole other demographic not make the purchase because it’s a “kids Chromebook.” Let’s not forget.

As for storage, you get 32GB of eMMC onboard storage. If you opt for the 8GB RAM upgrade, your storage also gets a boost up to 64GB. That’s on the higher end for these devices and makes this one of the few models with the most storage space.

So, in summary, your upgrade choices are:

The HP x360 vs. the Samsung Pro and Plus

Considering that the price point for this will be much lower than the Samsung Plus and Pro, opting for the upgraded model makes sense. Your specs will be on par with the Pro, which is considered one of the best and top-of-the-line Chromebooks you can buy. For a relatively unpopular laptop marketed to students, you can get some serious horsepower from your laptop by upgrading to the more powerful model. You’ll get a large portion of the Samsung Pro’s performance for a cheaper price. That’s getting some bang for your buck.

You know what else the HP 11 G1 has? An optional stylus Wacom EMR pen.

Similar to the Acer Spin, ASUS C213, and Samsung Pro/Plus, the x360 11 G1 gives you the option the option of purchasing a battery-free pen. Unlike the other Chromebooks, this pen isn’t included with your purchase. It’ll likely require you to make a separate purchase for it, however, it’s cross-platform compatible meaning that it won’t be tied to your device. You can use it between devices without any input changes. This will make it easier for students and teachers to communicate, give lessons, or collaborate with one another as they can write, draw, and calculate on multiple devices without needing to constantly change stylus inputs and syncing devices. The Wacom EMR pen is also similar to an actual #2 pencil. It feels the same and even has a special eraser that erases the same. Students and teachers will have no problem feeling at home and getting comfortable with the pen. And no batteries? That’s the best part.

It’ll also offer some features similar to the Acer and ASUS models, such as a convertible body and a world-facing camera that’s attached to the keyboard portion of the laptop. This will allow users to use the camera to record presentations, lectures, and more with a webcam. When it’s in tablet mode, this camera will be activated and can be used with the screen being a giant viewfinder display. You can use this for many purposes, such as a close-up microscope, recording a lesson, or perhaps use it with apps that offer integration?

Like most Chromebooks built for students, kids, or teachers, the HP x360 will have a durable, rugged frame and many different features to protect it from bumps and bruises. Some notable ones include the rubber shell coating, a spill-resistant keyboard, Corning Gorilla Glass on the screen, and a strong, reinforced hinge.

With all these powerful features and a price that’s yet to be released, it’s one good deal. Why? Because the price will most likely be much lower than Samsung’s Pro and Plus laptops, considering that it’s supposed to be affordable for students. If you’re a professional or a typical person, don’t skip over this one just because it’s made for students. With that much power, stylus input, rugged design, convertible body, awesome secondary camera, and a cheaper price, there’s no reason not to grab this Chromebook.

Here’s the summary of the specs:

Again, you can get the full spec sheet for the HP Chromebook x360 11 G1 from HP’s website here. They also offer some more details about the laptop you may be interested in, such as connectivity.

I know I’d rather have a durable Chromebook if I’m going to be shelling out money for something that has all these features, rather than a glass cannon.

The HP x360 Chromebook will be released soon with a price point. Keep in touch and I’ll write a third post about it when it finally rolls out.