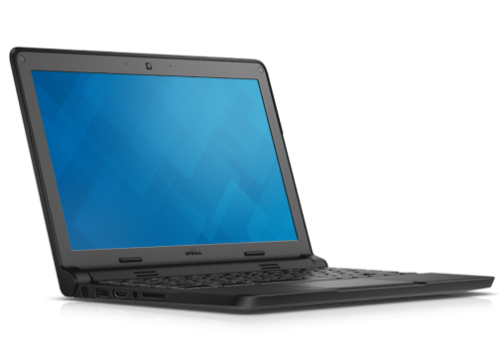 Dell jumps in and joins the Chromebook party of 2017 with a few new models.

Samsung made headlines with its new Pro and Plus Chromebooks recently at the CES convention, and now Dell has unveiled its own model at the BETT expo in London.

Chances are you’ve never heard of it.

It’s an educational exposition held in London where Dell had the opportunity to show off its new line of laptops, including Windows-based laptops as well as Chrome OS devices. There were also some 2-in-1 convertibles as well thrown into the mix.

For starters, the Latitude series is continued with the Latitude 11 Chromebook, which comes in both a standard and convertible form.

They also announced the Dell Chromebook 13 notebook, which is pretty much just an upgraded version of the 11 with a bigger screen and some under-the-hood performance boots.

The laptops are available on the 7th of February 2017. As of this writing, that’s just 3 days away if you’re looking for a new laptop.

Dell has made some improvements over their Latitude models, including durability and ruggedness as Acer and Lenovo have both been making strides in creating the ultimate bulletproof Chromebooks.

The Latitudes feature sealed keyboard, which can basically route water away from the keyboard instead of damaging the internal and vital electronics.

What’s different is that Dell’s keyboards are supposedly 100% waterproof, meaning that they can handle any amount of water you can pour on them.

Lenovo and Acer Chromebooks can only handle so much water before getting damaged. This makes them water-resistant, not waterproof, there’s a slight difference. For example, they can only route up to 11 ounces of water (on average) before they start getting flooded. And let’s not forget the residue that can build up in the internals.

Dell’s new Latitude keyboards, on the other hand, are sealed so that no liquids can enter to leave residue in the first place.

The keyboards are also more resistant to peeling or “popping” out of place to make them more tamperproof from students who like to switch keys around (who doesn’t?).

Unsurprisingly, they also meet MIL-SPEC 810G military standards, which tests for a variety of durability factors, including drop, weather, temperature, humidity, and of course, water. The power port even has a metal reinforcer so it can be yanked without damage (not that you should attempt it, of course).

One keynote feature is that the 11 is a convertible with a camera that’s able to capture pictures when in tablet mode, which makes it like a giant smartphone. It also features stylus support, which Dell calls their “Productivity Active” pen.

With the pen, the Latitude 11 convertible (Windows) is priced at a steep $579 whereas the standard Chromebook 11 convertible is $349. Same screen size, but one is rich with features and different OS.

The Windows versions are obviously more expensive, but it’s not a surprise. If you’re going to for the Chromebook versions, it’s a smart choice as they’re making huge improvements and will have full support for the Google Play store apps as announced by Google.

All 2017 models will be able to run Android apps. That’s one huge advantage over the Windows versions, other than price.

There are also a few customizable options as well which can suit your needs, depending on what kind of setup you’re looking for. You can get more power and performance if you need it.

It’s actually a lot more processing power than most Chromebooks currently have, so you’re already a step ahead in terms of performance compared to today’s typical model.

If you’re new to Chromebooks, you may want to see what they can do. If you’re looking forward to the Latitude 11 or 13, they’re almost ready for launch and should be available for pre-ordering.