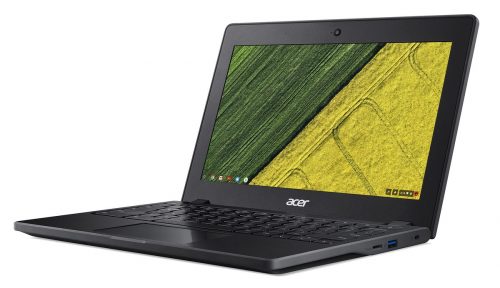 Are your kids ready to go back to school? Summer’s over.

Of course, they’re not.

(But I’m pretty sure you’re overjoyed.)

Anyway, there’s a particular Chromebook model that’s making a lot of buzz in the Chromebook world. If you have kids, you’ll probably want to see what the buzz is all about.

This is a sort of preview-review of the Acer C771. A full review will be posted when I get my hands on one.

So, what’s so special about this laptop exactly?

It’s built just for kids and students, which makes it the perfect companion for school. They’re going back to school now so it’s a nice addition to the arsenal of learning tools in their backpack.

Of course, you could say that about a lot of laptops, so let’s go over some reasons why this one’s special compared to any traditional laptop out there.

That’s right. It’s literally less than an inch thick. This makes it thin enough to fit between the three dozen books (do they still make you carry that many?) your kid has in the bag.

With a slim profile and a tiny body, it’ll fit into any backpack right along with math and science books.

That brings me to my next point- wouldn’t it get crushed between those books? Or how about I just stop using these all the transitional phrases and say it- will it hold up to your kid’s school of “hard knocks?”

That’s exactly what it’s built for, my concerned friend.

It’s nothing to worry about.

It’s got all the features you could want if you’re looking for a durable, near-indestructible (to an extent) Chromebook. It’s a durable laptop built for any mischief your kid can throw at it.

It’s been drop-tested at a whopping 48-inches in height according to The Verge, so it’ll take pretty much any drop from a table, desk, or the lower body if it were to slip out of a pair of hands. You could literally have this thing slip off the corner of your desk and not get destroyed. That’s some impressive construction there.

The C771 also has a spill-proof keyboard that redirects water flow away from electronic components. Spilled milk? Soda? Water? No problem. The keyboard will channel the water out and away from the laptop and drain it safely. That’s awesome.

It can also withstand up to 132 pounds of force directly applied to the lid when it’s closed. That means you could literally drop all the books in your student’s backpack on top of it and nothing should happen.

That’s crazy. Your kid could basically use it as a chair pad with no damage (other than cosmetic damage, of course).

(The Lenovo 11 N7 is also a durable Chromebook you may be interested in.)

With all these features, it’s nearly bulletproof. Now that’s forward-thinking.

This thing is built to take on anything. It’s one of the most durable Chromebooks on the market in 2017.

Now let’s talk about the specs under the hood.

The Acer 11 C771 is packed with an Intel 1.6GHz Celeron processor, which isn’t bad and will handle daily tasks with ease.

However, you can upgrade to Intel’s 6th-Gen Skylake Core i3 and i5 CPUs in September. I’d strongly recommend getting the newer Intel Core CPUs because they offer a lot more performance over the Celeron.

These chips will handle a lot more resource-demanding tasks and offer a more speedy experience. With the Play Store being available on Chromebooks, you’ll want to have a powerful processor so your student can get all the latest apps and games. Getting a faster processor makes all the difference- the Chromebook will be a lot faster, multitasking will be a breeze, and it’ll be able to take on the even the most power-hungry apps.

If possible, I suggest you get an i3 or i5 CPU.

If your kid likes to play games or watching videos, the C771 has an Intel HD Graphics 510 coprocessor for rendering these videos or games in silky smooth playback. It should be able to process light to moderate apps and games without any lag.

As for RAM, it’s got 4GB. That’s double what you commonly find in budget Chromebooks. It gives you enough to multitask efficiently and effectively.

With 4 gigs, your child can play games, do homework, browse the web, watch a video, listen to music, and chat on Facebook simultaneously. Though, I doubt anyone could be doing all that at the same time. The RAM isn’t amazing as there are Chromebooks with 6GB variants, but it should be enough to handle anything and everything.

The C771 comes with 32GB of eMMC storage space, which is double the standard 16GB you get on entry-level Chromebooks. This is really plenty of space and should be more than enough. If your kid likes to save images or videos off the Internet, you’ll probably need more space. Not to worry though, it’s easy to expand the storage space.

Your student will also have access to Google Drive as well, which is cloud-based service run by Google. You can save images, videos, and other media here and access it anywhere. You get free storage space and you can upgrade to a paid plan if needed. You have plenty of options.

The screen is an 11.6’’ IPS display which is good for multi-angle viewing. IPS technology also offers brighter and vivid colors. It’s what Apple uses in their displays for that crisp color fidelity. The resolution runs at 1366 x 768, which is HD. It’s not full HD, but it’s enough to watch videos and play games in clear resolution.

Acer Chromebooks have awesome screens and they have had a good reputation going, so I expect this one to be no exception.

The Acer 11 C771 comes in black and looks sleek enough to accompany the cool kid in class. It’s built for students and has all the features a parent could ask for. It’s powerful, fast, and secure.

It also comes in a touchscreen variant with the model number C771T. This model will feature a full touchscreen and your kids can use the laptop with their fingers instead of using the trackpad. It’ll be slightly pricier than the non-touch version.

It’s advertised to have a runtime of 12-13 hours. That’s a school day and a half. Plenty of power for in-class assignments, and then even more for homework. And then games. And then social. And then recharge. This battery will last your student all day.

The price will start about $279.99 for the non-touchscreen version. The touchscreen bumps up the price to just about $329.99.

This is about middle-of-the-line for Acer Chromebooks. They have entry level ones that are right around $150 and some pretty sophisticated ones that go all the way up to $500. The C771 is priced right in the middle of their price spectrum. It’s not too expensive, but it’s not too cheap either.

Will this Chromebook be suitable in the classroom?

Chrome OS is not the same as Windows, but it offers everything that Windows does in the form on an app.

(You may want to check out some must-have essential apps for Chromebooks.)

There are app substitutes for everything and your student should have no problem. The only issue is if the class requires specific software to be installed on the computer.

This will pose an issue because Chromebooks don’t allow third-party software to be installed directly onto the laptop. However, if the software is web-based (most are), there should be no problem accessing it since it’s all online. The Chrome Web Browser will handle it.

Not just for students

Don’t be afraid of buying one for yourself either. The C771 can be used by professionals in a variety of industries.

The durability really comes into play when you need access to a laptop in a harsh environment. I can see this being used in construction, retail, and even foodservice. You could even pick it up if you’re just a casual user who wants a good Chromebook that’s durable.

It’s built with students in mind, but that doesn’t mean it’s just for students.

The Acer 11 C771 is now available from select retailers and is slowly rolling out to others. Do some research on it if you’re interested.

(Shopping for just your kid? Check out the best kid-approved Chromebooks.)

I’ll be posting a full in-depth C771 review when I get one for myself. Feel free to subscribe for email updates.