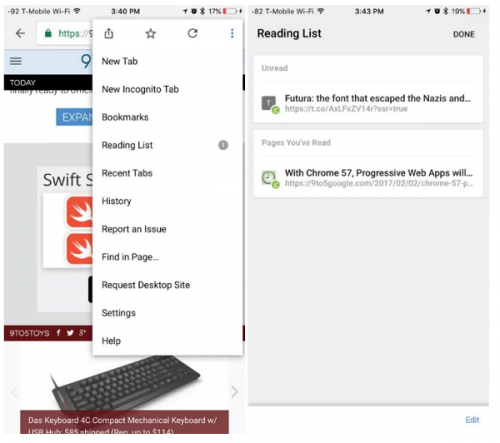 Chrome 57 for iOS is getting an awesome new feature…but you won’t be able to use it yet.

I wrote about the new changes in Chrome 57 just recently, but I missed a fine detail.

The latest stable release of Chrome for iOS includes a brand new Reading List feature that’s similar to the one in Microsoft Edge. If you’ve never used something like this before, it’s pretty handy and I use it often when I’m on it.

It’s actually one of the features that Edge has over Chrome. I guess you could say it’s what gives it an “edge.”

It’s a list of websites you save in a list for later reading. It even allows you to save entire webpages so you can read and browse through them offline without an Internet connection.

Again, that’s a webpage, not a website. You won’t be able to click links that go to another page or site even if you save it in your list unless you save that page too.

This feature is already present in Edge and even Apple’s Safari browser. It’s a surprise that it’s never been released for Chrome, but then again, it never really bothered me since I use multiple browsers and it’s only handy once in awhile.

Leaked images that have surfaced on the web show that the Reading List can be accessed using the menu in the top-right of the window.

You can find your saved articles, media, and pages in a list sorted by “Unread” and “Pages You’ve Read.” I can see this coming in handy for students doing research, Internet shoppers doing price comparisons, or even making a list of quick-access tabs for a quick retrieval process for later viewing. This sorting is something that Safari currently lacks.

If you’re on a Windows device, just open up Edge and you can see how it works:

Step 3:  You can add webpages to this list for later reading. Your most recent page is in the top panel, and your other saved pages are below it

From the images, it looks relatively easy to use and the UI looks pretty and basic. I use this feature pretty often for doing research on products. When I compare products and prices, I find it useful to save them for easy access later. It beats copying-and-pasting the articles into a notepad or bookmarking them (I don’t like my bookmarks cluttered with temporary pages).

With this feature coming to Chrome OS, I can take my Chromebook further and save pages without having to save a whole list of links into an Evernote clip. It just makes the whole process a lot simpler.

When will it come out for Chrome OS (not just Chrome iOS)?

Chrome 57 is rolling out to Windows, Mac, Linux, and Chromebooks as you read this. The Reading List isn’t available on the desktop version as of now and is only shown in Chrome for iOS.

If you just want to update to Chrome 57 on any device, you can check by doing the following:

The Reading List is currently undergoing beta testing in the Chrome Beta channel.

When it become available or the public, it’ll likely get a name change since it’s too similar to Apple’s current Reading List. it should prove to be useful for iOS users as it offers a better user experience compared to Safari’s browser in its current state. Or it could just make the transition from Safari to Chrome that much easier for middle-of-the-fence users.

Either way, it’s a nice feature that should be rolling out soon to iOS users. It’s one feature that’s easy to overlook since the majority of the updates were for Android devices. You can find out more about the Chrome 57 update here.

Update: We’re now on Chrome 59 and it’s still not available yet for Windows, Linux, and Chrome OS (on Chromebook) users. I’m still waiting for this update. I’ll write another article when it rolls out for all platforms- whenever that is.