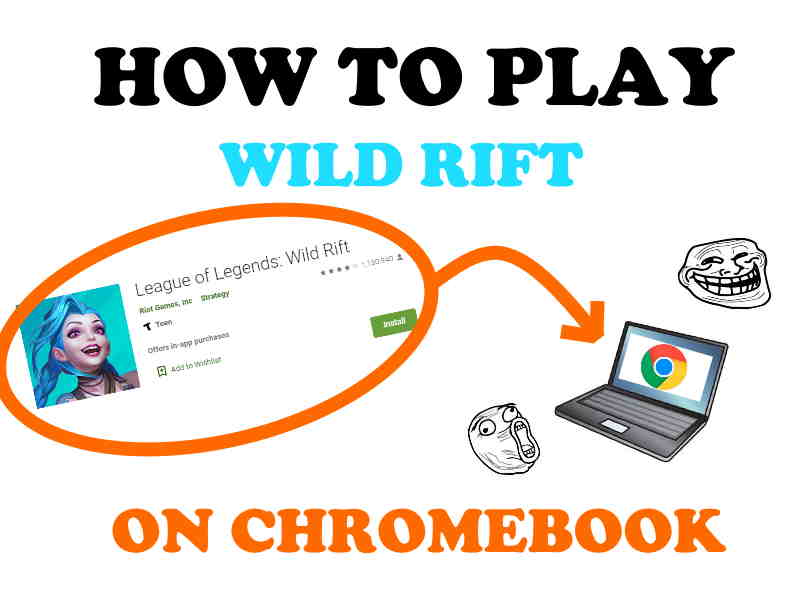 So, you want to get some Wild Rift LoL action on your Chromebook.

The game made waves in the mobile app stores- securing over 1.2M reviews and 10M installs in just a few months after it’s official launch.

Riot Games’ mobile adaption of their wildly popular League of Legends is a roaring success and well received by the fans (so far).

But then again, it’s Riot.

Regardless, LoL: Wild Rift CAN be played on a Chromebook.

And this quick little tutorial will show you the way, Summoner.

And if it doesn’t work for you, this is only the beginning of the game’s launch.

So it should become more optimized shortly if Riot is on their game. There’s a lot of microtransaction money to be made!

Soon you’ll be landing Kog’s R on a running away 1HP Cait/Nunu combo and hit them both for that sweet, sweet DOUBLE KILL.

Can you play Wild Rift on a Chromebook?

Yes, you can. But whether or not the game will run smoothly depends on your setup.

For most people with a modern Chromebook, it should be OK at the optimized graphic settings.

But if you’re running an absolute potato, even the lowest settings may not be able to make the game playable.

Is it officially supported on Chrome OS?

No, the game does NOT have official support from Riot Games at this time.

Thus, we’re using an optimized version that’s designed for phones on the laptop.

But that’s OK. It’s all we have right now.

As long as you don’t have a potato Chromebook, you should be able to at least install the game and run it at a low FPS.

Can my Chromebook even run Wild Rift?

Wild Rift doesn’t play well with keyboard/mouse input at the moment, which makes sense since it was designed for mobile.

The system requirements for Wild Rift are as follows:

The RAM requirement is fulfilled by 100% of Chromebooks on the market.

But the CPU requirement? Probably not.

That’s why the performance stutters, lags, and the game crashes.But if you have a newer, modern Chromebook, you may be able to run the game just fine when you toggle the graphics settings.

Just like the desktop version of League of Legends, the mobile version has plenty of video settings you can play around with and tweak to squeeze those frames.

You should be able to run the game even on a low-spec Chromebook if you do it right.

But we’ll cover that in a bit. Let’s first download and install WR.

How to install Wild Rift on a Chromebook

Now onto the actual instructions to download the game. You’ll find it super easy.

Get it from the Play Store.

That was easy, wasn’t it?

If you see an error like “not compatible with this device,” it’s exactly as it reads.

Wild Rift may not be compatible with your Chromebook yet because they haven’t included it in the list of supported devices.

Or it could be underpowered, too weak, or outdated. It may change over time.

But for now, there’s nothing you can do about it unless you play on an emulator.

For everyone else, just download it and you’ll see the icon pop up in your app library.

Note: IF you don’t have the Play Store, you may be able to force update your Chromebook to get it.

This will require you to switch to the Beta Channel from the Stable Channel.

It’s not difficult, but just make sure you save all your data to a physical drive.

Emulators and Wild Rift: What about BlueStacks, Nox, etc?

It’s possible to emulate Wild Rift onto other platforms using BlueStacks or Nox.

This lets you run some games that wouldn’t usually work, like Clash of Clans or Rules of Survival.

It’s even possible to map out the controls to keyboard/mouse rather than touchscreen.

You could technically get BlueStacks on your Chromebook and then emulate the game, but I expect performance to be sub-par.

If you’re able to map out the controls, then you’ll be leaps and bounds over the touchscreen players. In Nox, there’s a function called click to move which lets you move in any direction.

You can set keys to attack, move, and quick cast, which will basically break the game.

Imagine using Ezreal or any skillshot champ and then cast in any direction while predicting your target’s pathing. QW combo ahead of the opponent and you break the game.

Emulators may get you banned because it gives you a high skill ceiling. Mobile players will only have the benefit of kiting which is a lot easier with touchscreen controls IMO.

But when it comes to skillshots or landing your targets, using Nox or Bluestacks lets you be precise without having to stop your champ from moving and standing still.

So it’s pros and cons.

Whether or not it’s legal varies.

A rep from Riot responded to a Reddit post saying that using an emulator won’t trigger a ban as long as no extra functions are enabled.

But if you use something that gives you a distinct benefit, like rapid function press, that would result in the banhammer!

Then again, why you would play on an emulator when you can just play the desktop version is subjective.

Maybe you like the casual atmosphere of Wild Rift compared to regular League of Legends.

Or you have friends that only play on mobile, but you prefer League of Legends on PC.

The game was designed for touch controls, so you’ll have to play it in landscape mode with your fingers.

It can be hard since the UI will be blown up and you’ll have to jump your fingers across the screen to land those Qs.

But hey, what choice do you have?

Why not play the desktop League of Legends on your Chromebook instead?

There’s no way to map the controls to your keyboard and mouse (or touchpad) with the current Play Store version of LOLWR.

It’s possible with an emulator though like Bluestacks or Nox. See the previous section “Emulators” for more deets.

Note that emulators are NOT supported by Riot:

Last thing to note: emulators, while not a bannable anything, are also not officially supported in anyway by us. We gotta focus right now on mobile so if theres something wonky with an emulator its likely not going to be fixed directly by good ‘ol Rito.

Thankfully, Wild Rift has built-in graphic settings so you can tweak it to squeeze out more frames just like the desktop version.

To get a smooth gameplay session on your Chromebook, here’s how to optimize Wild Rift:

Once you optimize LOLWR, it should run a lot smoother. Landing those Qs will be like taking candy from a baby.

Some users reported that the game launches up and starts just fine, but after champ select, the game crashes.

The only thing you can do is make sure that your Chromebook meets the minimum requirements and cross your fingers until Riot fixes it.

It’s a common issue and some Redditors are suggesting to report it to Riot in their thread.

Post your Chromebook’s model and species and then let them know about the issue.

By default, the Play Store shouldn’t allow you to install WR on your Chromebook if it doesn’t meet the requirements.

But if you were able to download and play it but the game still crashes, let them know about it.

The previous patch seemed to have this issue, but the recent update may have fixed it. Let me know if your game still crashes even on 2.2.0.4027.

If Wild Rift lags on your Chromebook, change the graphic settings to the lowest settings or just toggle it for “Performance.”

If it still lags, there’s nothing you can do but wait for Riot to optimize the game going forward. A beefier Chromebook may help, especially if you play a lot of games on it.

PSA: Some Chromebooks are more suitable for gaming than others! Get a good gamepad and you have a mini budget gaming rig.

Lag isn’t really a problem for most users, which is a surprise.

If your Chromebook can install it from the Play Store, it meets the minimum system requirements.

But I think this is subjective to user testing, how many programs you’re running, Chrome version, patch version of LoL, etc.

You can do the basics to help get more FPS:

No more excuses for missing that Anivia wall. But you can still land the Karthus R, right?

The last thing you can do is tell Riot about the glitch or technical issue you’re experiencing.

Or you can be a troll and make a new thread dedicated to whatever your problem is so it gets their attention.

Are you on Summoner’s Rift (on your Chromebook)?

What do you think? Were you able to get it working?

With Wild Rift being a game optimized for lower-spec systems, I anticipate that the majority of Chromebooks will be able to run the game.

Modern Chromebooks are equipped with access to the Play Store by default, so over time, the integration should only improve.

Riot is a business and it’s in their best interest to pull in that sweet, sweet cash.

If enough people show that there’s demand for Wild Rift on Chrome OS (by complaining in threads on their forums), then they should devote some resources to making WR more compatible on Chromebooks.