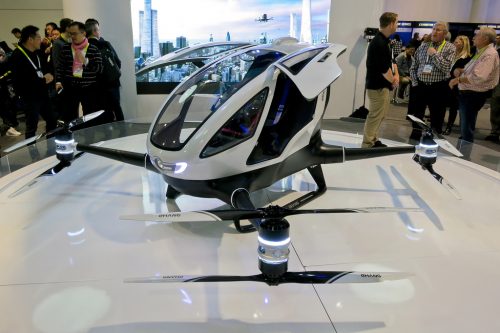 Get ready for the automatic air transport- it’s here.

The world’s first taxi drone is here. It was revealed to the public 6 months ago at the CES convention in Las Vegas.

It’s called the Ehang 184 drone and is being developed by the Chinese firm Ehang. They’ve partnered with the Nevada Institute for Autonomous Systems, or NIAS, and the Governor’s Office of Economic Development.

It’s currently in a testing phase in the state of Nevada.

Tom Wilczek, an aerospace and defense specialist stated: “The State of Nevada, through NIAS, will help guide Ehang through the Federal Aviation Authority regulatory process with the ultimate goal of achieving safe flight.”

Ehang will begin testing with these two entities and hopes to prove the airworthiness and safety of their taxi drone. They’ll work together with the FAA and the NIAS, and develop the taxi drone until it’s safe enough for public transport.

This is nothing new to Nevada. Over the past few years, Nevada lent itself as a testing zone for transport solutions and is one of the first states to approve the testing of autonomous vehicles on public roads in the US- with a permit.

Ehang is based in the Guangzhou province of Southern China and is specializing in camera drones and hobbyist drones as well. However, the drone is one of the few projects that’s one of its kind. It’s like Google’s self-driving car, but rather in the air than the road.

What are the technical aspects of the Ehang 184 drone?

It’s capable of transporting a passenger at speeds up to 63 MPH at altitudes of 11,500 feet.

How it works is simple enough- you get in, you input where you want to go, the drone takes off vertically, and flies you to your destination.

Currently, the drone is capable of flying up to 23 minutes.

It’s powered by 8 propellers on 4 arms. It runs on huge batteries- similar to a Tesla on the road.

Provided that there’s plenty of room for improvement, who knows where it’ll take this and the applications that it’ll fulfill.

The next step for self-driving transportation

Self-driving cars are already becoming a thing in the US, and now it looks like self-driving drones are following (or flying) behind closely. Well, this drone at least, since there aren’t any other competitors that have advanced as far.

Wilczek says: “I personally look forward to the day when drone taxis are part of Nevada’s transportation system.”

What do you think? Do you agree?