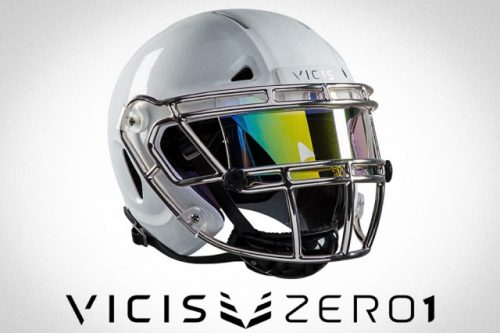 This helmet is a modern take on the football helmet made by self-proclaimed tech company Vicis.

The NFL has admitted to the dangers of concussions and their negative impacts. They announced they want a solution. And would probably pay a nice dollar for it.

There’s a lot of innovation put into the design of the helmet, specifically for taking on rotational and linear impact. The helmet contains 4 different layers which each have a specific function. The uppermost layer- the Lode Shell, absorbs powerful forces by actually deforming the helmet.

The Core Layer is one layer in from the Lode Shell. It’s made with many columns stacked between the Lode Shell and the Arch Shell, which is the next layer deep. It bends, flexes, and stretches to mitigate forces in all directions, rather than a straight on impact.

The Form Liner is the innermost layer, which is made to conform to the player’s head and flex the impact in a multi-directional force.

The helmet also defies traditional sizing. Instead of measuring by head circumference, the Zero1 actually fits perfectly using a person’s head length, breadth, and width. Vicis dubbed this the Axis Fit System. A snug fit allows for even distribution of impact mitigation, rather than having some snug and some empty space within the helmet.

Vicis plans to have helmet tested by Virgina Tech’s STAR rating system, which is one of the most highly respected design and proof systems available. The system rates helmets on a star scale on how well they mitigate impact and offer protection. Although, a 5 star rating doesn’t mean full protection from head injuries.

It’s amazing how many companies are looking to change the world. Be on the lookout for this helmet making news.