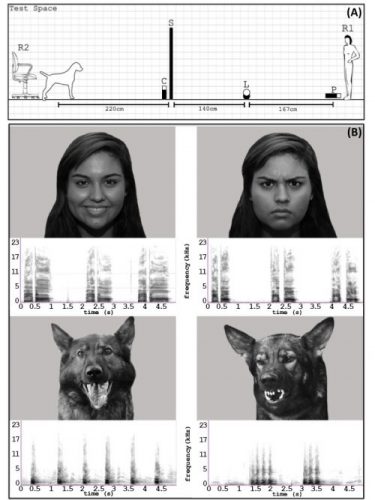 A study recently published in the science journal Biology Letters finally proves that dogs can use both sound and vision to gauge your emotions and mood. Your dog can manifest a feeling of how you’re feeling using multiple cues simultaneously.

If you own a dog, you probably already know this. But for doubters, this is actually the first time it’s been proven that our canine friends can use stimuli to read emotions.

The study was conducted at the U of Lincoln, UK, and U of Sao Paulo, Brazil. A total of 17 dogs were used in their research.

The process is simple- they basically showed the dogs some images while playing sound clips. The images and sounds were separated into different categories- positive and negative. Positive emotions included happiness and playfulness, while negative included anger and aggressiveness. Straightforward enough.

It was shown that the dogs spent a significantly longer period staring at sound clips and pictures that “matched” with each other- indicating that they would sit there and process the information, and respond to it. A happy image paired with a happy sound would leave the dog staring and processing, which meant that the dog could recognize the given emotion and respond appropriately.

Kun Guo from the University of Lincoln states:

“Previous studies have indicated that dogs can differentiate between human emotions from cues such as facial expressions, but this is not the same as emotional recognition.”

“Our study shows that dogs have the ability to integrate two different sources of sensory information into a coherent perception of emotion in both humans and dogs. To do so requires a system of internal categorization of emotional states. This cognitive ability has until now only been evidenced in primates and the capacity to do this across species only seen in humans.”

Dogs have been shown to recognize a single stimuli, such as voice or facial expression. However, this study proves that they have the capacity to recognize multiple stimuli and gauge the state of it.

Daniel Mills from the University of Lincoln states:

“There is an important difference between associative behavior, such as learning to respond appropriately to an angry voice, and recognizing a range of very different cues that go together to indicate emotional arousal in another. Our findings are the first to show that dogs truly recognize emotions in humans and other dogs.”

You should practice your poker face.