After downloading dozens of free and paid apps from the App Store, I’ve concluded that many of them are just…crap. Seriously.

Many handwriting apps are either not sensitive enough, too sensitive, don’t respond, freeze, slow to load, charge you for features that should be free, or have poor note organization.

If you’re like me, you want to take notes quickly on your iPad and just save it for reading later. You want a way to sort your notes and organize them in a way that’s logical.

You want a note-taking app for your iPad that loads right away and lets you start writing with your finger or stylus in a pinch.

You’d think finding a handwriting app would be easy.

You’d think finding the best handwriting app would be simply search and download in the App Store on your iPad.

That’s what I thought too.

Just a bare-bones way to handwrite

All I really wanted was a basic (and free) handwriting app that’ll let me write with my finger or stylus for my basic iPad so I don’t have to type (since personally, I think the iPad on-screen keyboard needs work).

But instead, that wasn’t the case…

Boy, oh boy, did I not even know nor expect the hassle and trouble it would be just to find a handwriting app for the iPad that’s actually good and works well.

So, to save you from the trouble of sorting through all the apps you can get your finger on, I’ve compiled this list of the 5 best handwriting apps for iPads. Hopefully, this saves you a lot of hassle and energy from installing and then uninstalling a whole bunch of apps that just don’t work well.

So, here’s the list of the 5 best handwriting apps for iPad that I’ve come across

Note that this list is somewhat opinionated based on what exactly you’re looking for in a handwriting app for your iPad. Different users have different uses. I suggest you try all of these out and choose the one or two handwriting apps you like best.

Another note: the iPad wasn’t really designed for a stylus in the first place, nor writing with your finger, so these apps have had some innovation to work around this need. Such features are “palm rest” that will prevent the iPad from registering your palm on the screen of your iPad as you write with your finger or stylus.

Although these innovations are pretty cool, none of them are perfect. I suggest you choose the handwriting app that serves your purpose for downloading the app in the first place. Try out all the apps with both your finger and stylus and see what you prefer.

Notability was the first handwriting app I tried on my iPad that actually worked. It has a whole slew of features and probably has everything that you need. The interface is easy to use and transitions smoothly from screen to screen.

The handwriting experience is superb. I only found myself correcting errors when I was “trying too hard” to get my iPad to register the notes. It’s best to write with your finger or stylus just like you would normally write.

You have all your basic tools, such as a pencil, highlighter, and extra keys. You can also zoom, import, export, connect to Dropbox, iDisk, or any WebDAV server- if that stuff is important to you. Notability comes with a “palm rest” as I mentioned earlier, and it works decently well.

You can also use templates, such as outline formats. All notes can be annotated with PDF annotations. It even has landscape and portrait modes, which was something that I expected all handwriting apps to have, but surprisingly didn’t.

Notability even has left-handed writing mode. Writing on it with a stylus feels very fluid. When you reach the bottom of a page, Notability will add a new page of the bottom so you don’t even have to turn it.

What I liked best: The fluid and intuitive menu screens. I found everything without a hiccup and didn’t have to go through many menus and just to find out how to upload to Dropbox.

Similar to Notability, Noteshelf is a very fast handwriting app that feels extremely fluid and easy to use. It loads fast with very little lag between screens and has smooth transitions. It’s almost like a minimalistic version of Notability.

Noteshelf responds pretty well to your finger and stylus and you can write normally without any extra “care.” The interface is very clean and easy to use and seems to be focused on the user’s experience. It also has a “palm rest” function just like Notability.

You get all the basic functionalities you’d expect from a handwriting app on your iPad, although not as much beyond that.

A few things I didn’t like about Noteshelf was that it didn’t have as much user integrations, such as uploads, compared to Notability. It lacks some features that you’d expect a note-taking app would have, and it also costs more than Notability.

What I liked best: The clean design.

Penultimate is perfect if all you want is a handwriting app for your iPad that does exactly just that- handwriting. It has a very nice and smooth writing feel to it, and I found it to be the most responsive out of the 5 handwriting apps.

The writing feels very smooth and instantly responds to your finger or stylus. The only drawback is that it’s a very basic handwriting app. It doesn’t have a lot of features you’d expect, which is the same problem with Noteshelf.

However, if you want a basic app that lets you take notes and write with your stylus or finger, then you may want to check out Penultimate.

Yes, Notability is higher-priced, but if you don’t want the extra bloat and features, then this is a much more basic and practical app- especially if you’re not going to use all the extra features. It’s one of the cleaner apps for taking notes.

Best Handwriting App for iPad #4: UPAD for iCloud by PockeySoft

UPAD 3 is probably the fastest handwriting app on the list.

The whole app, from launch to saving your handwritten notes is almost lag-free. UPAD 3 also has a bunch of features similar to Notability, such as annotations, PDFs, note organization, and you can pretty draw anything you want.

The funny part? Although the writing engine is decent, the menus are weird.

The interface isn’t exactly logical and I’d often go menu-hunting for what I need. It also seemed to be unresponsive to some commands by pen and finger. It’s lag-free, but it doesn’t respond well. It’s weird. I’d only recommend this if you don’t mind dealing with some menu-hunting, but you want a fast handwriting app. This app loads in a pinch.

What I liked best: The load speed is very speedy.

Best Handwriting App for iPad #5: Notes Plus by Viet Tran

Notes Plus is a decent app. First, the writing engine works well with pens, but not so much your finger. It also has a weird flicker to it.

Besides those two points, it responds excellently just like Notability and has some features that are in high-demand, such as full-screen mode, automatic backup to Dropbox, audio recording, automatic zoom, and even a web browser.

Notes Plus is like a handwriting app with all the features that people want, but no other app has.

If you’re willing to deal with the minor setbacks and high price, along with waiting for an update to fix the issues, then you’ll probably like Notes Plus. It works, don’t’ get me wrong. If you’re just going to take notes by hand or stylus, this app is worth the price for the features you get.

What I liked best: Full-screen mode was very helpful for taking out the annoying menus that come in most note-taking apps on iPad. If you’re taking notes on an app, you want as much screen space as possible.

Check out Notes Plus here. 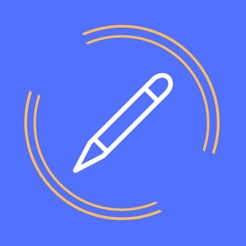 Okay, yes, I know this app is super expensive. Is it worth it? It depends. This app is mainly used for converting your handwriting with finger or stylus into text. It doesn’t really have a mode where you can just write with your pen or finger. You can write anywhere on the screen and use a custom keyboard.

But, it has a few features that you may like, such as a built-in text editor, a shorthand mode, a context analyzer (the app knows the surrounding text), and even a way to make phone calls by clicking on a phone number. This app also works across multiple cloud provider services, like Evernote, SkyDrive, Google Drive, and iTunes.

These are weird little features, but don’t do much if you want to handwrite notes- the main purpose of this list. I just thought this app might be fun to mention. It does have some use for the converting handwriting to text mode, but it’s slow and laggy. It also lets you zoom, but it only supports a single line of text. It also has a shape detector, but it doesn’t work that well.

What I liked best: The context analyzer is pretty cool, but this is something more apps should have by default. It came in handy. But a $4.99 analyzer is expensive. Heh.

Did you take note of that?

Okay, so that’s my list of the best handwriting apps. I tried about 30 apps in total on my iPad, and these 5 were the best of best for my note-taking purposes. All the other apps seemed to have many flaws or lacked features.

For me, I just need an app that loads fast, responds well to my stylus (I rarely use my finger), and has basic features such as highlighter, file organization, a search mode, upload to Google Drive, and doesn’t lag my iPad.

Taking notes on the iPad is a major bonus of the device, since it’s portable and has a big screen. But, finding an app for taking notes is a difficult task, especially since there are so many apps that made just for handwriting- or so they say.

If this list has helped you choose the best handwriting app you could find, please share it.

If you have other handwriting apps that you’ve used and worked well, please share it in the comments to let other discover it. You may have some that I didn’t cover.