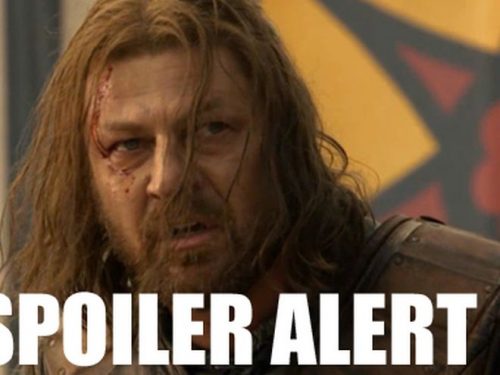 Well, then you’re in for a nice treat.

Game of Thrones episodes are aired weekly online now. And if you’re not on your phone, tablet, or computer streaming the newest episode at 9PM EST with your butt glued to your chair, you’re going to probably have that episode spoiled through the world of social media.

Maybe you had to study for an exam. Or maybe your car broke down. Or perhaps you were at work.

For whatever reason, you missed it and now you need to watch it on DVR.

Or maybe you had another show to watch and planned to catch the Game of Thrones later.

Why even bother watching it anymore?

The Internet is a dangerous place for post-episode Game of Thrones discussion, with tons of spoilers here and there through feeds and threads.

It’s hard to not talk about it.

If you don’t watch it Sunday night, you’ll definitely hear about it Monday morning- whether you want to or not.

Well, a (probably) hardcore fan of the GoT series thought this out and came up with a solution. Instead of sheltering yourself from the Internet and human communication until you watch the episode, you might want to check out this little nifty gem.

Is the name clever? Indeed. It’s the perfect solution to avoid and halt Game of Thrones spoilers all over the Internet.

What Game of Spoils pretty much does is basically completely covers the Game of Thrones spoiler with a blacked-out box with a warning in white text that shows word phrase activated the box.

So, instead of seeing a post spoiling the episode, you’ll see a black box over it instead with a phrase that shows exactly what triggered it.

There’s really an app for everything.

So, what exactly does Game of Spoils do?

The description says Game of Spoils detects and blocks out any posts on Facebook or Reddit, tweets on Twitter, or stories on Google News that mention ‘Game of Thrones’ or many other GoT-related terms, such as ‘Winterfell’ or ‘Targaryen.”

I tested Game of Spoils out myself and it works as advertised. All the offending content that would spoil my Game of Thrones episode plot is blackened with a solid black box.

It does a good job at filtering out regular stuff that’s not GoT related to things that are.

The phrase that appears also has a clever relation in reference to the series. You’ll see what I mean if you download it.

Customizing Game of Spoils and protect yourself from GoT spoilers online

If you really want to see the post, you can choose to unhide it. But that would defeat the purpose of avoiding the Game of Thrones spoilers in the first place. Game of Spoils does its job by blocking out those posts, and you unhiding them is counter-productive.

The only problem is that it doesn’t work on individual sites that are talking about Game of Thrones, and spoiling it.So even with the browser app to avoid Game of Thrones spoilers, you may want to avoid clicking on regular websites. It’s really made for social sites and Google News.

So even with the browser app to avoid Game of Thrones spoilers, you may want to avoid clicking on regular websites. It’s really made for social sites and Google News.

However, there is a workaround that you can use to tweak Game of Spoils.

You can add custom phrases that you want to be blocked.

No more Game of Thrones spoilers with Game of Spoils

So, from anything major to minor, you can add- from character names, locations, weapons, animals, events, phrases from the GoT series, or anything else.

The Game of Spoils app will then filter out those posts that contain your custom strings with a black box.

Don’t have another episode ruined by some random person you followed online.

Get the Game of Spoils app and do Game of Thrones right.

You can check it out here.

Protect yourself from getting Game of Spoiled online. It’s completely free to use and installs in seconds. Now you can venture the cyberlands with no fear of trolls that may be wandering.

Here’s a video demo of Game of Spoils in action: