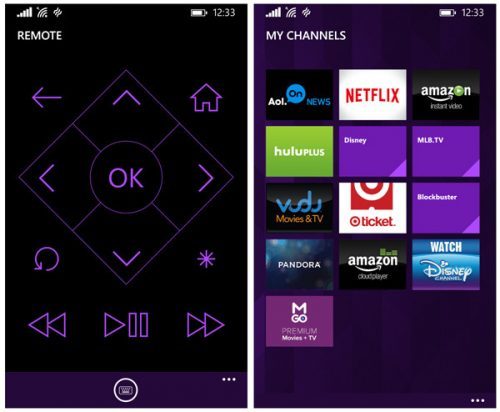 Roku announces a new build of their app via the Universal Windows Platform (UWP).

(However, it’s not really “universal” at all.)

As any Windows Phone user knows, the Windows mobile version of the Roku app is basically a bare-bones version, despite being universal on all Windows platforms.

You can grab it on any device, but the

The Roku app is being updated and developed for laptops, computers, TVs, and tablets almost exclusively- or rather, with a large focus on devices with larger screens rather than mobile computing. The mobile version is slimmed down and doesn’t include all the features the other versions for tablets, laptops, and desktops.

So much for a “universal” platform across all devices. It’s more like an omnipresent app with different features for different devices.

Roku mentioned that they’ll be making and designing the app optimized for larger screens that both laptops and tablets offer, but not so much for mobile devices. They also mentioned that working with Microsoft closely is a key factor to push for a universal experience.

The new Roku app has a few new perks- mainly Cortana integration for improved search and a redesigned home feed that has a quick-access bar for your Channels list. This is a convenience for larger screens, which may be why Roku and Microsoft aren’t really focusing on mobile devices- at least not now. You can use Cortana to search for shows, movies, and apps easily.

I expect this to not really take off though. Not many users utilize the voice search on any device- whether it be on a smartphone, computer, tablet, laptop, or even Roku. But if you happen to be one of those who like to search by voice, you’ll be glad that now you can.

The new app also includes the “Play on Roku” function for playing your music and viewing your photos right on your TV screen. That’s pretty awesome.

So, why isn’t there any mobile support for Roku?

If you didn’t know already, the Windows App Store is pretty much non-existent compared to Android or iOS. If you’re a Windows Phone user, you probably already knew this.

Whether it’s support, updates, patches, news, or improvements, Windows is the platform that usually comes last in the list to get the update (or sometimes not at all).

I used to be the owner of a Windows Phone and the App Store was bare. Apps were poorly-coded. Apps didn’t get updated. Apps didn’t exist for Windows but did for the others. It wasn’t pretty.

See that new app? It’s probably for Android and iOS users only. See that new game? Windows Phone gets the crappy version that’s a version behind. We all know that the mobile space for Microsoft is in last place.

Thus, it’s not surprising to see that Roku and other companies are ignoring the mobile app outlet for Windows Phone users. Roku is just like any other software company and focusing where the majority of users are- on Andriod and iOS.

Listening to users’ feedback and reviews for features and requests on the Windows Roku app get ignored. Why focus on one particular user’s complaint when you can help dozens of users more on iOS?

The whole idea behind UWP is that it’s supposed to be universal. You can download an app and it’ll be there for you- synced across your PC, tablet, Xbox, phone, laptop, and maybe even Hololens. If UWP takes off, it’ll be pretty impressive and feel like a cloud service for Roku.

Update: Roku has much improved their Windows app for mobile devices. Although the app still has a bunch of bugs and room for improvement, it’s been improved since then. You can still see from the user reviews that the app isn’t perfect- not launching Channels, poor performance with Windows 10, connection issues, doesn’t work, no video playback, lacking features, etc. But at least they’re trying. As for UWP, there hasn’t been much news about improvment.

After seeing many giant companies simply ignoring the mobile option is too obvious to be a consequence.

The whole UWP idea seems to be ignored by developers, to be honest. Is it too much work? Is it not worth the budget? Is it a bad investment?

Microsoft needs a lot of help if it wants to have developers put in the time, effort, and meet all the requirements to play along with the UWP push across Windows 10- let alone have a functioning Windows Store for mobile apps.

If all these developers jumped on board and dedicated a team to work on a Universal Windows Platform, it’d be an amazing thing to have.

We’ll have to see what happens. Roku is a leader in the on-demand streaming industry. I expect more from this company as they improve over time. Sit tight.