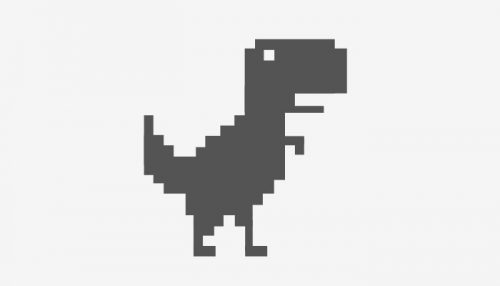 Did you know Chrome OS has a hidden game that you can only access when you’re offline?

The game’s widely known and many people actually force their Internet connection to be broken just to access it. That’s how good it is.

If you’re reading this, you’ve either heard of this somewhere, or you just saw the headlines and got sucked in. That’s what happened to me.

I was thinking, really Google? A hidden dino game?

Obviously, the purpose of it is to keep those who are experiencing internet difficulties occupied. It’s sort of a hidden easter egg, like the many that Google likes to hide in their software.

Anyway, in this article, I’m going to teach you how to launch the game, along with some other tidbits and interesting facts about it.

So, let’s get started already, shall we?

Last updated: 2/15/18. I’m constantly updating this article for the most accurate information.

How to play the Chrome dinosaur game

For starters, you’ll need a copy of the Chrome Web Browser.

This trick works on desktops, laptops, tablets, and smartphones.

It works on Windows, Mac, iOS, Android, Linux, and Chrome OS. You can grab the browser here.

It’s completely free to use and is the world’s most popular web browser to date. Go ahead and download it. It should work on whatever device you’re currently using.

It’s cute and…just so Google. This is the kind of thing that you’d expect from them. After all, being a search giant, you’d think they wouldn’t have time for this kind of stuff. Their sense of humor isn’t gone yet. It’s Google.

Anyway, actually getting it to run is very easy.

First, you need to turn off your WiFi connection.

If your computer is connected to the Internet via WiFi, go ahead and disable the connection. This varies depending on your device and operating system.

Here are some basic tips on how to turn off the WiFi connection:

If you’re on a laptop or desktop with an RJ-45 cable, just unplug your Ethernet cable. Double-check to make sure that your computer doesn’t automatically connect to a WiFi source to stay online- you want to be offline to get this game running!

You can also disable any active connections from your Chrome settings menu, but that’s a lot more complicated (and requires too many steps) so I recommend just ripping out the cable. It’s a lot easier to do so and straightforward. Make sure that your device shows you that there’s no Internet or WiFi connection active or else this won’t work.

Tip: You can also just launch Chrome and type in “chrome://dino” to go directly to the game! Thanks to a reader for pointing this out!

Try to load a page, such as the one you’re reading right now, by pressing F5 on Windows, refresh button on your phone or tablet, or the Refresh button (where the F3 key is on a standard keyboard) if you’re using a Chromebook.

You’ll quickly see a page saying there’s no Internet or WiFi connection available, along with a dinosaur in the top left corner. The picture is your key to the game.

Now, all you need to do is click on the dinosaur and then press the spacebar. If you’re on a phone or tablet, just touch the image.

The dinosaur will slowly start moving after the background stretches to the width of the page.

It has now begun. Get your fingers ready for some dino-dodging action.

You’ll see a desert layout unfold along with various obstacles, such as pokey cacti and other things you’ll want to avoid.

Your goal is to dodge these obstacles and not ram into any of them or else it’s game over. Literally. You’ll have to restart from the beginning. Pressing the spacebar will let you jump over them, or touching the screen if you’re on a mobile device.

Your score is tracked in the corner of the screen, and the goal is to get the highest score possible without running into anything on the map.

It’ll start out slowly, so don’t go thinking it’s easy. It’ll start to speed up and get more difficult as you need to act quickly to dodge the cacti.

If you’re a gamer, you’ve probably played many games similar to this kind of endless running style, and you’re familiar with how the mechanics work. It’s very similar to many popular apps out there.

If you’re not a gamer, it basically won’t end until you get smacked with a cactus- that is, your dino get smacked. There’s absolutely no point to it other than racking up a high score for bragging rights or self-satisfaction.

If you manage to get something you’re particularly proud of, take a screenshot of it and go brag to your friends about it. Post it on your socials. Tell your boss. Show the stranger next to you.

(Use “Print Screen” for Windows and “CTRL + Multiwindow Key” on a Chromebook to take a snapshot- that’s the key where F5 would be on a standard keyboard).

It’s all fun and games

It’s actually pretty funny that Google put in a treat like this when there’s no Internet connection.

Having my ‘net get cut-off is worse than getting cut off on the freeway. You’re watching a video, or working on research, or just trying to load your email and bam, no Internet. Then you have to troubleshoot the issue and find out why there’s no connection.

Is your WiFi connection weak? Is your cable loose? Are your neighbors stealing your bandwidth? What’s going on?

Thankfully, you have a running marathon to alleviate these questions and let the frustration float away as you dodge dangerous cacti in a vast desert with your dino pal.

Don’t even ask yourself those questions, just click the dino and spacebar away. Start first. Ask later. Then, if you find out that you can’t get your Internet connection back right away, just get some more dinosaur until you do. It’s pretty addicting actually.

My high score is only about 1K. So, I admit I’m not too good at it. When it starts speeding up, it’s very difficult to keep up.

A (somewhat useful) tip I can give you is to keep your eyes at the edge of the screen and don’t look at your character. Just let it run across the screen and time your jumps.

You don’t want to miss out on this dinosaur-jumping, cacti-dodging, high-score getting, desert-trolling, side-scrolling action.

You’d expect Google to do this kind of stuff, just like the “do a barrel roll” on Chromebooks using the hidden key combo.