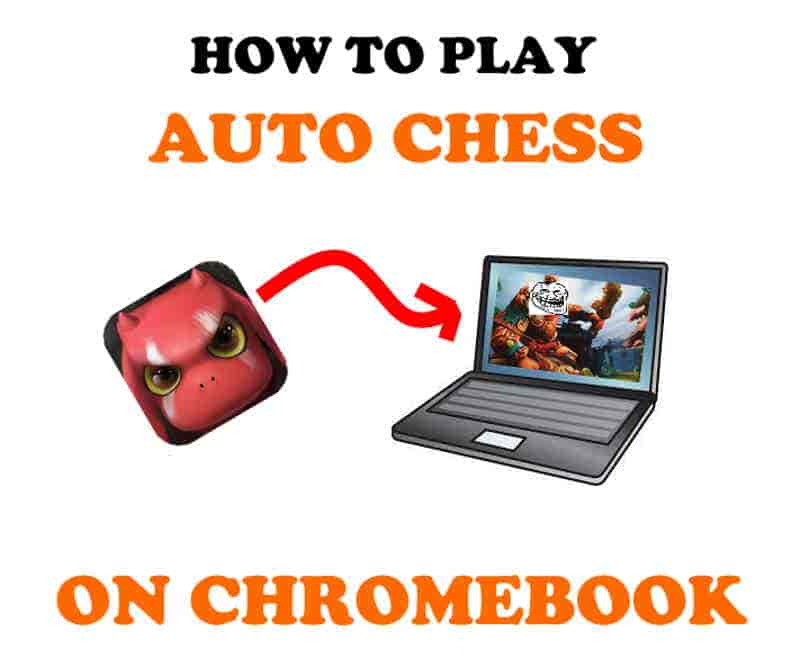 So, you wanna play some Auto Chess (Drodo/Dragonest) on your Chromebook?

Auto Chess is a popular mobile auto battler that’s common compared to DotA Underlords (which I have a tutorial for also).

No matter which one you want to play, we’ll get some chess action going on your Chromebook.

Let’s just hope that you have a newer model. It’s not going to run smoothly on a potato, but even if it’s total garbage FPS, at least you can still get OTHER games going, right?

Can you play Auto Chess on Chromebook?

While it’s not made for Chromebook, it CAN be played on it.

You should not expect anything close to optimal performance.

As of this current version (2.4.2), it still suffers from framerate issues, slowdown, crashes, and lag. Blank screens, forever loading, and slow animations are still prevalent.

Remember that this is a mobile game with a PC version. It’s not made for Chrome OS, but will run on beefier ones.

Ideally, you’ll want a newer model that has some decent specs under the hood (4GB RAM, 32GB SSD, Intel i3 or higher, 1080P resolution, etc.)

Is it free to play?

Like 99% of F2P mobile games, it offers an in-game purchase system to make Drodo Games that sweet, sweet money.

But you don’t need to pay anything to play the game and have a blast.

Being that it’s highly detailed in graphics and uses complex game logic, it does require a beefy Chromebook to run. You’ll need a more powerful machine to run it.

You can improve FPS by toggling system performance, which we’ll cover letter.

The requirements for Auto Chess are:

As you can see, AutoChess is pretty demanding and won’t run smoothly on lower-end computers.

You’ll need a beast of a Chromebook to run it on high settings. Or you’ll need to lower the graphic settings to get it to playable FPS.

Not to mention that none have a dedicated GPU, pixel shader, vertex shader, or video RAM. At least the SSD space is only 4GB, which all Chromebooks meet.

If you have a lot of junk, get rid of it first. Lower-end models will instantly get ¼ of their total available space gibbed from the start.

Plus, it’ll probably run like garbage since the game is not optimized at all. You should only do this seriously if you have a stronger Chromebook or you’re just bored and looking to waste some time.

Besides, once you get Linux installed, you can play OTHER titles on your Chromebook that DO run well!

You can search this site for your favorite games to see if I have a tutorial for them.

How to download and install Auto Chess on Chromebook

Here’s the bulk of the tutorial and the steps to get the game on your Chromebook.

Depending on how old your laptop is, you may have to change how you install the game.

We’ll cover this for older Chromebooks and provide alternative methods to install them.

Don’t worry if it sounds confusing- we’ll cover this in detail.

Get ready to play.

Use the Google Play Store – The easy method

The easiest way to get the game is to simply download it from the Play Store.

If you have a Chromebook made after 2017, then you should have the Play Store built-in by default!

Watch out for fakes

There are a lot of fake third-party Auto Chess games on the Play store. Make sure you get the right one. The publisher is “Drodo/Dragon Nest” and NOT some single individual.

These are other chess games trying to leech off the success of Auto Chess or impersonating it (or they’re a smart marketer for riding the wave!).

The right game you need to install is here for your convenience.

If you use this method, note that the controls may be kind of whack.

You’ll have to adjust the controls to make it playable like how it is on your phone or tablet. We’ll cover changing the controls in a later section.

The resolution, UI, and performance may also be off since the game is being resized to fit on a laptop from a phone.

So don’t expect a smooth transition.

But it’s good when you want to sit back and play some Auto Chess without having to hold your phone in front of your face. A bigger display has perks.

Don’t have the Play Store? Use Linux!

If you don’t have access to the Play Store because you’re running older gear, that’s fine.

There’s always Linux to the rescue. I like encouraging people to use Linux because it unlocks the potential to do plenty more with their Chromebooks.

Since Chrome OS is so easily repairable, it doesn’t do any harm if you screw up. It’s easy to revert it.

First things first, make a backup of your important things.

Next, there are two ways to get Linux. Newer machines have Linux Beta built-in, which you can access by changing a few settings.

Older ones will need to do it the old-fashioned way.

This is also known as the “Crouton” method. We’ll cover both, but mainly the older way since if you’re forced to use Linux, you probably have an older Chromebook.

Linux Beta is built for specific Chromebooks only.

Not all models will be able to access it. If you have a relatively new device, you should have the feature built-in and it can be toggled on with just a click.

If you’re able to use this, you can try it first to see how it works.

However, sticking with the old-fashioned Crouton method gets you the full desktop version of Linux so you can dual-boot with both Chrome OS and Linux. This is recommended for compatibility.

If you want to use Linux Beta, check out this tutorial.

This is the preferred method and is only a few steps more of work compared to Linux Beta.

Be sure to save all your files before you start because once you start, there’s no going back!

Follow this tutorial to get Linux with Crouton. After you’re done, come back here.

PS: IF you screw up, you can always reset your Chromebook back to factory conditions.

OK, so now you have Linux installed on your device, contrast.

Next, we’ll get Lutris. It’s a game library to make playing your games easier.

You can download it by entering the following commands:

If you like Auto Chess, here are some other similar games you may want to check out:

Some of them work on Linux so you can play them on your Chromebook (like DotA or DotA Underlords, etc.). Check them out!

Auto Chess on your Chromebook? Checkmate!

Now that you know how to get some action going on your Chromebook, have fun building your 6 Beast Insectoids + 2 Kira and a stacked Veno + Fallen Witcher?

(Or the best build that everyone’s sleeping on: 4 Shamans!)

Did you get it installed? Do you have any questions? Or are you stuck and can’t get the game running? Drop a comment and let me know!

If you found this tutorial helpful, tell your friends so then you can 1v1 fight me in RL. Or duos 2v2. Together. On Chromebooks. #TeamChromeOS