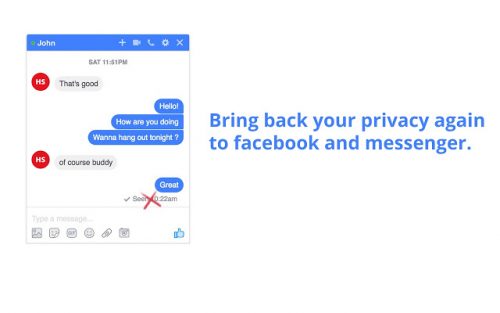 Want to read Facebook messages without the other person knowing you’ve “seen” them?

You can hide your read receipts- or “seen” messages on Facebook Messenger with Unseen.

Want to hide your “seen” messages?

Apparently, leaving a read receipt is a horrible thing.

In this day and age, showing the other person that you’ve read their message is a bad thing.

We’re all supposed to pretend we have busy lives and/or are multitasking so we don’t give too much attention to one specific person. Silly society.

You can remove the “seen” text from showing up to the message sender and they can’t tell if you’ve read their messages. This only works on Chrome, but you can use it across Chrome OS, Windows, Mac, or Linux.

The app removes the “seen at” notification message on Messenger and Facebook.com.

For those who aren’t familiar with Facebook’s messaging system, basically, when you receive a message from someone and read it, a small symbol will pop up showing that you’ve received and read the message on the other person’s account.

This means they know you’ve seen their message and either haven’t responded because of many different reasons, or they’re judging you on how fast you read their messages so they can gauge how important they are to you.

But of course, some people really want a tool to hide their seen notifications to the other person (or else this app wouldn’t exist in the first place). Right?

Or some other crazy, overblown theory like that. It’s crazy the things that go through people’s minds these days.

Read receipts aren’t anything new. They’ve been used in mobile SMS (texting) for ages now. They’re also used in many other apps like WhatsApp or iMessage.

I can see how they’re useful for the “normal” intended usage. They can show the other party that the messages successfully sent and was received.

For instance, if you’re sending a message to your friend to pick up some bread while she’s shopping at the grocery store, a read receipt would be useful whether or not she responds.

This way you know she’ll get the bread.

But, society has turned these read receipts into a judgment factor and twisted it into a self-esteem or ego metric. I don’t know, it’s complex. You know that’s what people are going to use it for. And it’s no surprise.

Anyway, if you’re a user of Google Chrome, you can easily hide any evidence that you’ve’ read their message.

Rejoice…I guess. Here’s how to hide your Facebook “seen” messages for good.

And the best part that you’ll like? It’s completely free to do. And it works.

Facebook doesn’t provide its users with any way to turn off these read receipts within their messaging system.

So, some developers got crafty and made up a Google Chrome extension that does the job.

To do this, you need to be using Google Chrome and you must have the extension downloaded.

If you don’t know what that is, it’s basically an add-on to your installation of Chrome. Chrome is available for Windows, Mac, Linux, Chrome OS, Chromebooks, Android, and iOS.

The extension you want to install is called Unseen.

Just download it using the link below and install it on Chrome.

You’ll need it to activate this technique. It’ll basically connect with your Facebook messenger and work with it. You’ll have to grant permissions.

You can grab it from the Chrome Web Store here.

Be careful with Unseen – or else be “seen”

It’s a Chrome plugin that will automatically block any notifications to the people you message on Facebook.

This means it’ll block the “seen” notification and the “typing” notifications that both appear on the platform.

I’ve tested this app and it works…sometimes. It’s not the most reliable, but most of the time it works.

I guess some exposure is better than having full exposure.

Before you do anything crazy, it’s not 100% guaranteed to work

Remember, you’re going against Facebook’s take on this feature, so of course, it won’t be 100% working in all scenarios.

If you’re going to use this just for one person, you should probably test if they can see it or not.

Can’t tell them you’re doing this? Then test them subtly. Use some questions that get them to answer without revealing your real intentions. And win.

I also found that out that Unseen doesn’t prevent delivery receipts. This means that if your friend sends you a message, they’ll know it was successfully sent.

But they won’t know that you’ve seen it or that you’re responding to it. This is probably what you’re looking for and is one of the only ways to hide Facebook read receipts on the whole Internet.

There are other ways to do this, but they’re much more technical than installing a simple app for free.

Unseen isn’t the only app that can block Facebook read receipts. There are a few dozen of them that you can check out for yourself on the Chrome Web Store here.

If Unseen doesn’t work for you, try another one until you find one that you like.

Anyway, it’s an excellent way to protect your “privacy” if you should please. Problem solved.