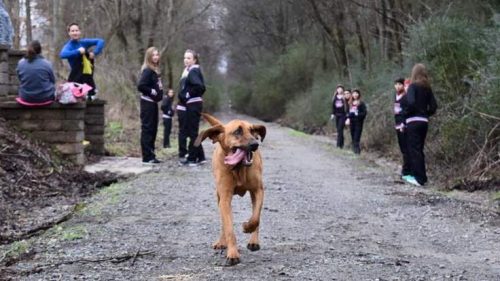 This marathon got dog-bombed, if that’s a word…

A two-year-old hound with a runner’s mind wanted to catch that festive spirit at the Elkmont Half Marathon hosted in Alabama.

The dog, Ludivine, rushed into the contest as a last-minute entry after her owner let her out to go potty. Instead of relieving herself, she decided to go for a jog.

The dog apparently has a reputation for walking solo through the woods.

She probably heard the sounds of runners nearby at the starting line and decided to sniff it out. Seeing the excitement of a starting race, she couldn’t be more pleased. Cheering, people, screaming…what more could a dog ask for? Other than food, any dog would be happy to partake in this event. It’d be hard to refuse.

Ludivine walked up towards the other runners and investigated…

The firing gun went off and the heard was released. Ludivine was no exception.

She stopped several times to investigate the surroundings during the 13.1 mile marathon, but kept up the pace with other runners along the track.

According to Jim Clemens, a runner who finished in 4th place, he stated “Every time I thought she had dropped off to go back home, I would hear her coming back up to me, and she would race past me up to the two leaders.”

Ludivine eventually finished- with a time of 1:32:56. That’s 7th place…out of about 165 runners. Race helpers put a medal on the dog, and took photos with her as well. She posed. 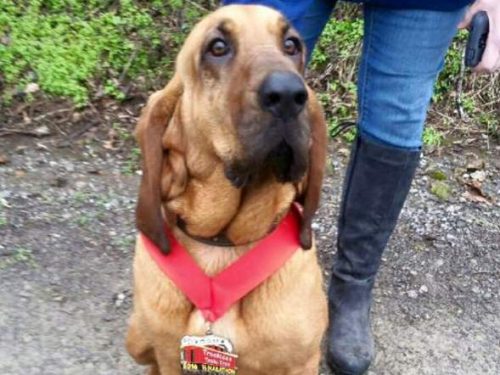 The owner, April Hamili didn’t even know until she started to get messages on her phone. She states:

“All I did was open the door, and she ran the race on her own accord.”

“Ludivine is laid back and friendly, so I can’t believe she ran the whole half marathon because she’s actually really lazy.”

Don’t judge a dog by its’ fur.